Does anyone know where I can get my hands on one of these stand adapters? I'm not fond of the instability and danger of lifting the bike on an ATV style jack stand via the sump.

If you're handy with a welder (which I'm not), my Dad actually fabbed up an awesome budget friendly bracket that makes lifting up on the standard motorcycle lift wayyyy better. Take a peek in my Media gallery, took lots of pics and drew up a CorelDraw rendering of it with measurements for you / fab shop to work with. Seeing yours is the 05 version based on your Ride: section by your name, you'll need to get different sized bolts if memory serves...they switched up the mm size hole in the frame at some point during this model run. You'll see it in action if you hit up YouTube and look for Triumph Rocket 3 Roadster rear tire removal (there's also a reinstall video I uploaded as well).

There are plans for a making one in my signature link. Check the Paddock Stand instructions.

Thanks for the assistance, guys. I'm actually going to be following that detent spring guide in your sig once I get this thing on the lift - the bike is stuck in second, and I'm not sure if it's the detent spring or something more serious in the transmission.

A friend and I installed a Jack-be-Quick rear bracket on my 09 Touring. Previous to that on my 2007 Classic Tourer, had a pair of "feet" with welded on pins that inserted through the lifting holes on either side of the engine, like in the photo mstraub72 posted. His is a single bar while I had one for each side but the principle is the same. Instead of a standard MC lift, I used one of those heavy duty scissor jacks with about a 6in x 12in platform. Mine was made by Black Jack but there are others sold on eBay now for under a hundred bucks rated at 1000 pounds. I used those on my FLH Harleys as well as all of my bikes.

While the JBQ is nicely made, it does not allow the Rocket to pivot, remaining flat on the JBQ bar because it is bolted on. I got a little concerned when I removed the rear tire on the Touring and the bike settled on the front tire, stressing the JBQ since it was on its edge. The other two types allow the bike to pivot on a scissor jack so when I removed the rear tire, my R3 settled on the front tire, or the converse when removing the front tire.

Mine were fabricated for me by a forum member, XHDSKIP from Oklahoma. I've lost track of Skip but I thought it was very nice of him to do this. No charge.

I found this pic in my files. It shows the 07 sitting on the scissor jack up on my lift. The lifting feet are somewhat difficult to see but are visible. My son has them now. 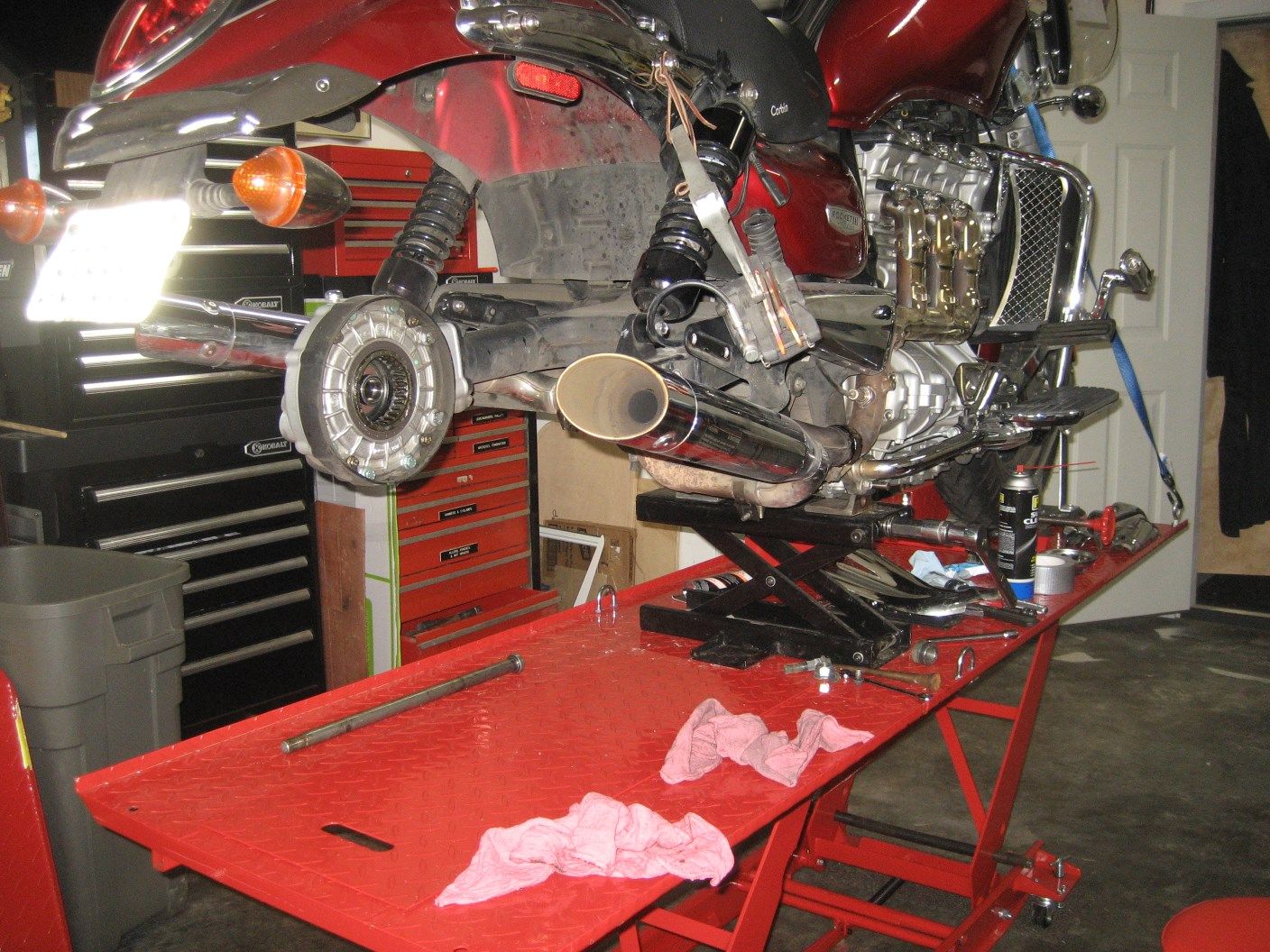 "And this one is just right" ~ Goldilocks 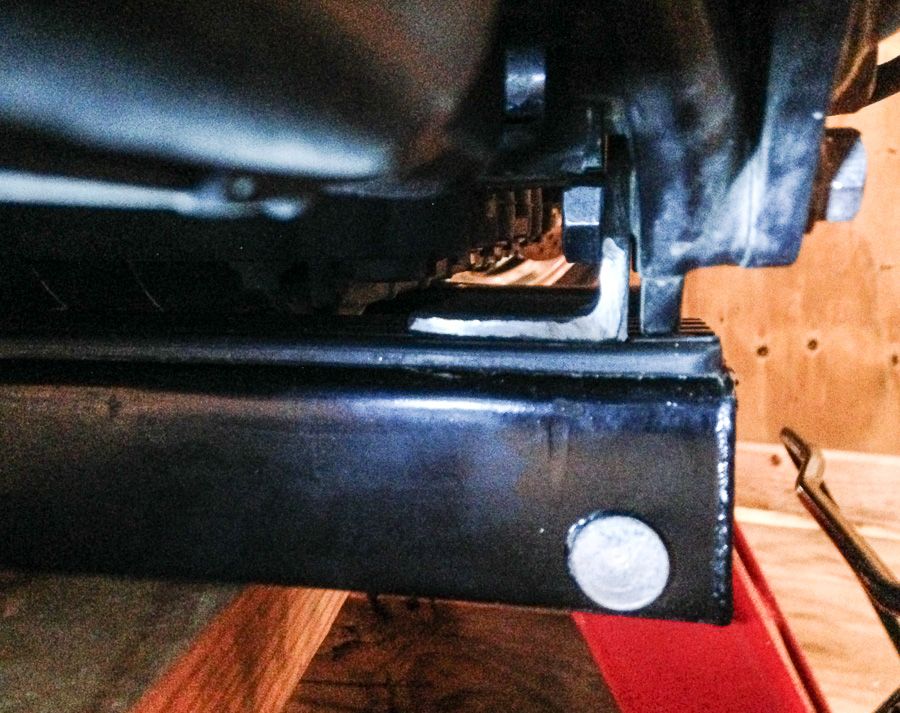 Similar to above, but with bolts instead of pins- I can't weld .
Also, fits in your tool kit so some "guy" in a shop somewhere on the road can lift your bike properly.
Just remove before riding and you have nothing hanging under your bike to snag. 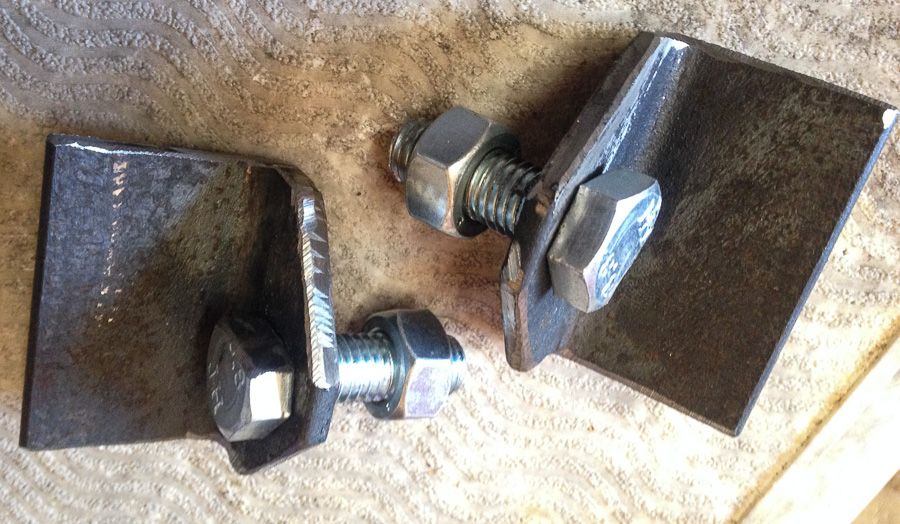 One of the Brit moderators on the "other", now defunct forum, suggested hanging something of the handlebars such as a piece of line, to remind the rider that the brackets are still installed. With the bolts instead of pins, it's not as big an issue since they won't fall off.
Similar threads