Need some advice from someone with more Rocket electrical knowledge than I.

This is a 2011 Roadster, running an auto battery and sidecar. Installed the group buy heavy duty battery cables and Power Commander V, turned on the ignition, no sweep, nothing on the gauges. Headlights high and low, taillights, brake lights, all work. Left turn signal works but not the right. Had no problem sweeping and starting before I did the install. Am sure I knocked a wire loose, but which one. Wiggled and jiggled all the connections with the key on, no sweep.

Removed the PCV, problem remains. Checked all the fuses in the fuse box, all ok.

Tested for continuity in ignition switch, have it between the white wire and the brown wire terminals only. Is that normal?

The plastic sheath on the ignition wires was brittle and breaking. So removed it and put on a new sheath. Underneath the yellow wire had a gap cut out of it. It looks like it might be for the alarm system which This bike does not have. Maybe cut at the factory? 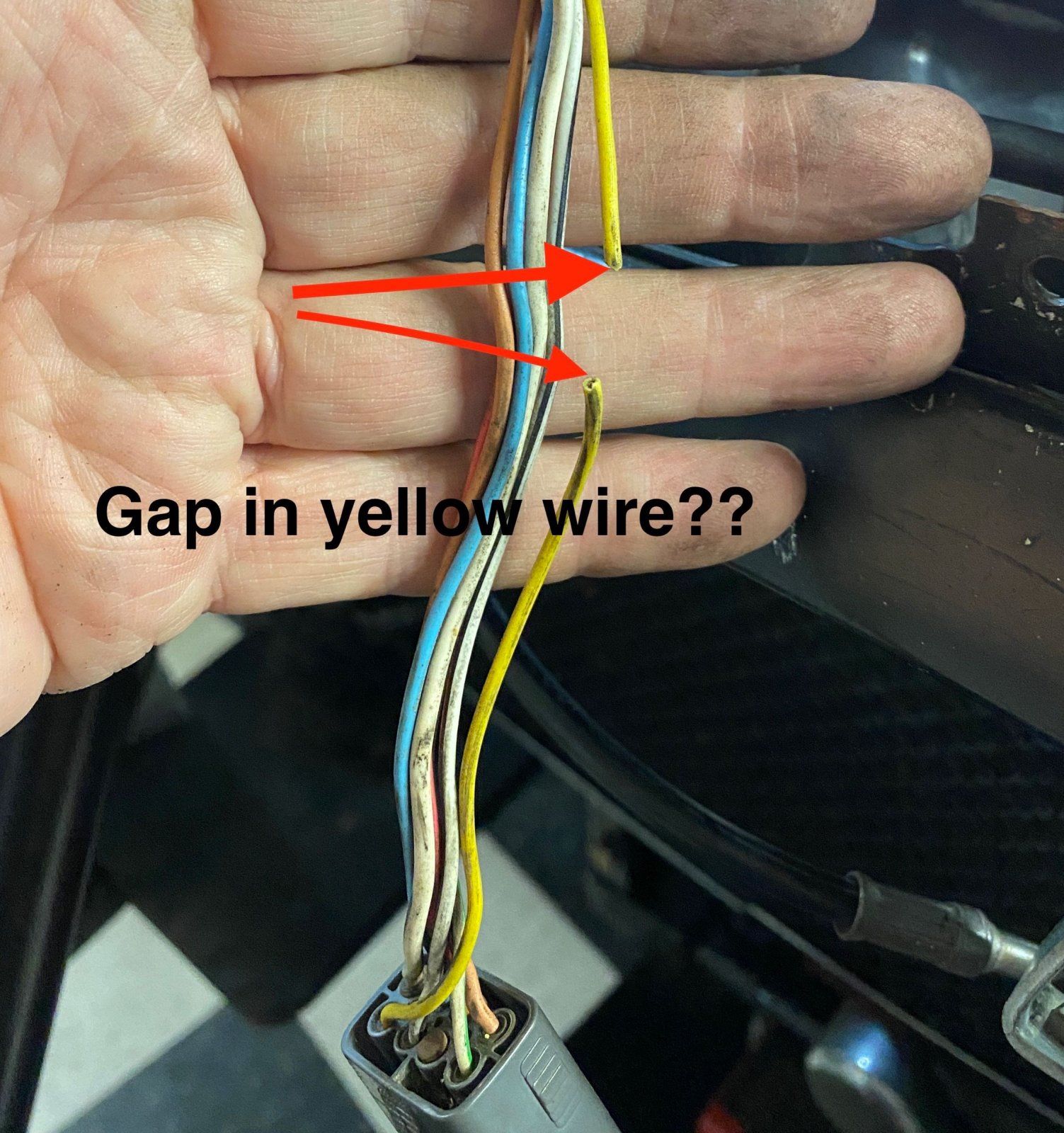 After reconnecting everything under the tank, there are three plugs unused, is this correct? 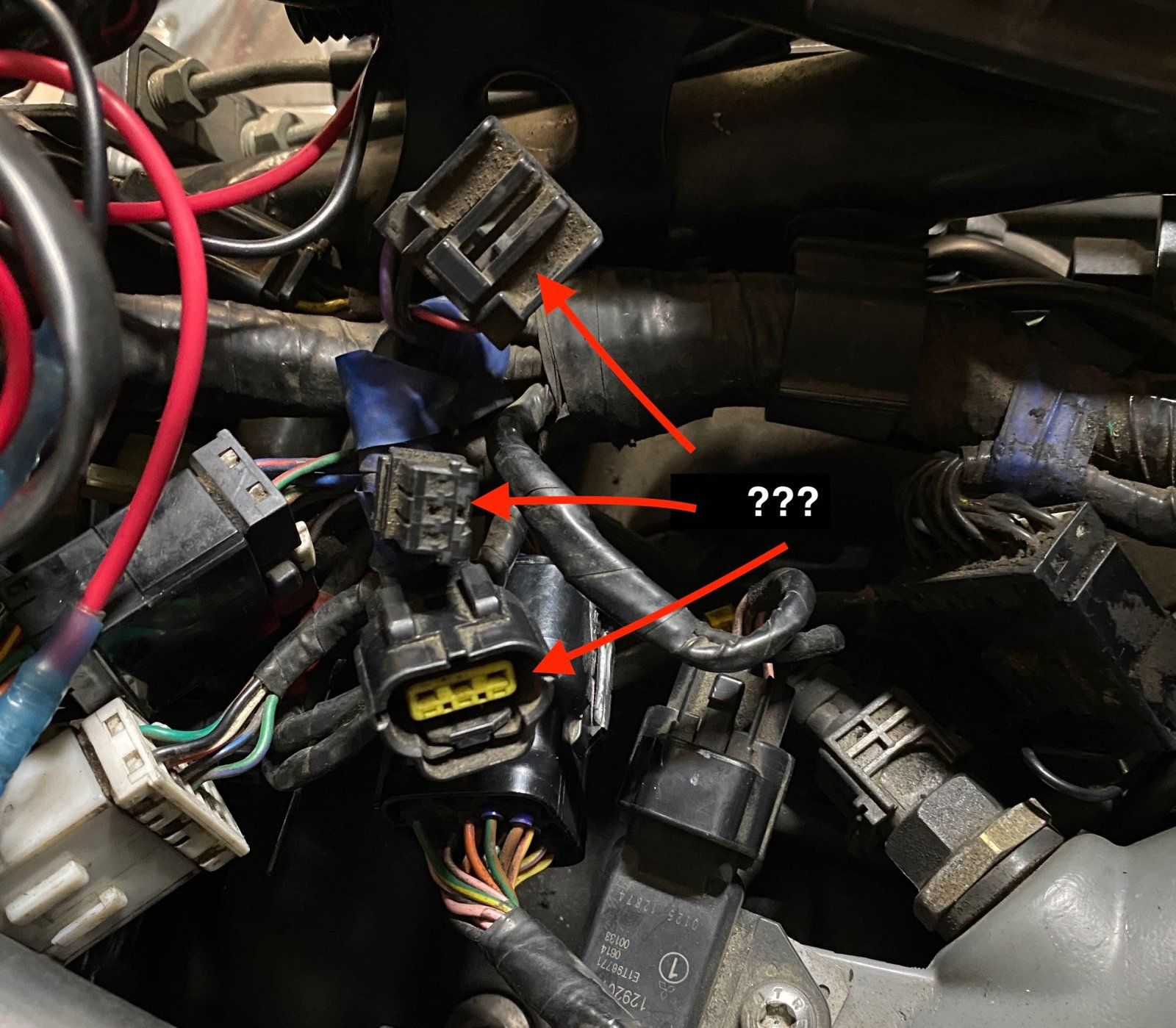 Where to start looking next? Any suggestions or help would be greatly appreciated.

Location
Up me BATTY Boy

The main man concerning electrical issues is @DEcosse . Hopefully he will see your thread/dilemma and solve the problem.

Kill switch on or off?

Roscoe said:
Kill switch on or off?

Thank you for the response. No lights on at all in gauges. tried flipping kill switch off-on- off-on, no change. Gauges dead.

Burnt/loose wire in the ignition switch ???

You need to connect those broken yellow wires together - that is the main ignition circuit feed.
It is not factory cut, that absolutely needs to be intact and somehow got broken, even though it looks cleanly deliberately so.

Those other connectors are unused accessory options

p.s. nothing alarm or immobilizer related in the key-switch harness

Thank you DEcosse. Will try that and report back to the group.

You might be best to use a butt splice which will add a little more length and thereby strain relief - if you just try to strip, twist and solder together (with heat-shrink over) it will end up shorter than the other wires and you will strain that wire to that the next point of failure which will likely be inside the switch itself

DEcosse you are the MAN> That was it! When I saw the yellow wire was shorter than the rest of the wires in the bundle, checked the wiring diagram in the service manual. Misread the yellow for the alarm system. Assumed the factory cut the 1/2 inch gap in that wire.

Since the factory has been cutting the yellow wire shorter than the others, that is putting an undue strain on it. This might be the source of many other Rocket/ignition problems. Used two butt connectors, added 4 inches to fill the gap. Now gauge lights on, get the sweep, starter turns over.

Thank you for a fast response, will re-plug the Power Commander and have everything back together by tonight.

CCjon said:
When I saw the yellow wire was shorter than the rest of the wires in the bundle, checked the wiring diagram in the service manual.
Click to expand...

Actually you won't find that specific yellow wire on the Roadster schematic anywhere - the colours on the sub-harness to the physical key-switch are not shown - only those on the main harness and the switch wires are not the same colour (e.g. that yellow wire actually mates to the Green on the Main Harness, which is the Ignition System circuit)
Otherwise yellow wires are predominantly used for the Park Light circuit - there is one more which a constant power source for the ABS system - there is no Yellow Wire on the alarm connector (ALL the wires are black on that connector)
If you look at the Touring or Classic schematics those DO include the wire colours for the key-switch sub-harness 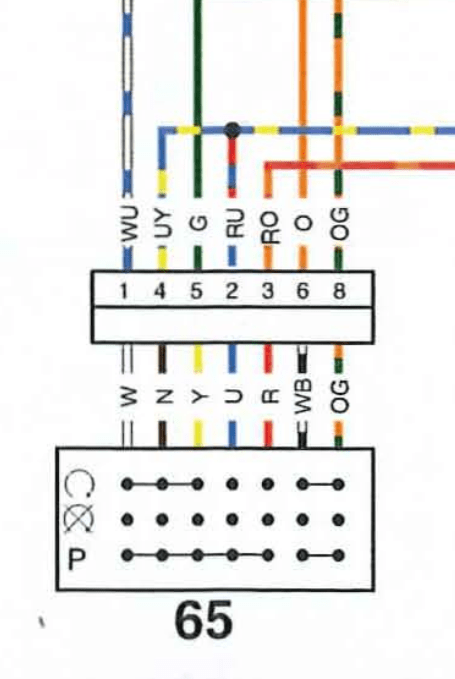