Gregger said:
I guess the improvements made to the newer Roadsters, where Triumph didn't run the feeds through the ignition switch, hasn't helped light output. The ignition switch may live longer but illumination may be worse. Where do they run the leads now? High/low beam switch???? (I don't have a manual).
Click to expand...

At least per the late model schematic I'm looking at, the power for headlights STILL goes through the Key-Switch
From Key-Switch to Fuse Panel to Headlight/Starter Relay, from there directly to the hi/lo switch and out to the lamps.
What is slightly surprising is that the HiBeam loss was lower than the LoBeam (sure you got those right way round?) You would expect the higher current of the high beam filaments to cause higher volt drop

With 8000 kms on my new 12 Roadster, don't really care about any warranty issues this might cause.....
Click to expand...

Don't know about CA Gregger, but a modification to your lighting circuit should not globally invalidate your warranty i.e. if your transmission failed, what could that possibly have to do with your Headlight mod?
Certainly in the US the warranty cannot be universally invalidated by mods and further the onus is on the Manufacturer (not the owner) to PROVE that a modification directly caused the failure under which a warranty claim might be denied. I love it when the law is based on 'common sense'.
Even in countries where the law does not specifically cater to modifications, you might hope that a dealer/Triumph would honour warranty on a genuine unrelated failure.

DEcosse said:
At least per the late model schematic I'm looking at, the power for headlights STILL goes through the Key-Switch
From Key-Switch to Fuse Panel to Headlight/Starter Relay, from there directly to the hi/lo switch and out to the lamps.
What is slightly surprising is that the HiBeam loss was lower than the LoBeam (sure you got those right way round?) You would expect the higher current of the high beam filaments to cause higher volt drop
Click to expand...

Does the ground also go through the ignition switch or does it go back to a common terminal? I found when taking the ground readings that they were lower this time. Also they changed as I moved the headlight wiring, up to a 1/3 of a volt. So I let the headlight hang and just took readings with my Fluke 77 multimeter.

I redid my tests being a little more observant and noticed a few things. One, the ground readings changed whenever the fan motor kicked in. They were also different between high and low beam settings.

I then redid the power lead voltage drop and confirmed that low beam had a higher drop than high beam although the overall readings were a tad lower????
New tests
High Beam (fan off) - 1.57 volts
High Beam (fan on) - 1.54 volts

The fan didn't really change the voltage drop on the power inlet side to the headlight but it did affect the ground. Not sure why voltage drop would be higher on the power low beam side unless there is some resistance in the switch contacts?
Last edited: Sep 5, 2014

Grounds do not go through any switches - they are all just branched/spliced eventually reaching the battery
The reason the voltage will change with the negative is because ANY load anywhere will be returning current on the negative circuit;
so the fan being on will drop voltage on the negative because of that current - even if they splice off from the main 'trunk' at different points, any point along that trunk will drop voltage up to where it branches specifically to the fan;

It's harder to explain without pictures!
The following is an illustration - the numbers are not factual!
Let's say there is 3 ft of common ground circuit from battery to where it branches off to the fan (that initial length is common to both circuits); then maybe 18" further on, it branches off again, to the headlights;
Now if you measure voltage from the battery to the point where fan branches, it will be higher with fan on, than not.
So even if the voltage drop from that fan branch point to the lamp does not change, because of that common main trunk dropping, then so it will also cause the total drop to the headlights to be higher.

You will find similar result if you unplug one of the lights - if you measure to the one that is on, it will now be a smaller drop, than when both lights are plugged in, because you are significantly reducing the current in the common ground line.

The positive voltage does not change quite so much for fan on vs fan off, because those circuits branch a lot closer to the battery positive source (at the fuse panel, before the key-switch)
So any volt-drop associated with the fan circuit, has no affect on the positive voltage at the lamps (but not so for the negatives!)

So - if the negative is dedicated, stand-alone wire from the battery negative to the lamp sockets, the ONLY current flowing through THAT new ground return, will be the headlights current. And if a decent gauge of wire is used, then it will make that voltage drop negligible.

Incidentally if the generating system still maintains 14.2V at battery at idle even when the fan is on that is pretty good!! (the 955's will drop quite a bit at idle when fan kicks on)

Yes, can only imagine you maybe have poorer connection (higher resistance) through the switch on the low beam circuit making that drop higher, which is contrary to expectation

Here are the realized gains I got on my S3 - same lights essentially as the Rocket
Although the OEM power schemes are different, from Gregger's numbers, the potential gains are about the same

Here is a direct comparison of the configuration on low beam, versus
1) the OEM,
2) stock reflector/lenses, upgraded wiring and Philips Xtreme,
3) with Cibie CSR lenses and one 65W Osram rally bulb

As noted on the images, all are exposed identically.

As a benchmark, this is what I started with:

This next phase is combination of the wiring/relay power enhancement and +80 Philips Xtreme H4 bulbs.


This next series of pics shows the HiBeam performance, and you can see purely the effect of the wiring/relays alone, from pics 1 to 2, with std H4 bulbs and then further improvement with better bulbs, without having to resort to changing out the lenses/reflectors.

Well started my headlight upgrade following Hanso and DEcosse's leads. Expected to get this done in 2 or 3 hours but guess what..... the older 250 AC Delco female spade connectors with tabs that I've had for years in my mechanics box do not fit properly in the Bosh relay bases which I also have. When they lock in place they actually block the inlet slot so the relay can't slide in. Drove around town for 2 hours looking for ones that fit and all I could find were the insulated ones that don't lock in the base. All the auto shops close on Saturdays here at noon. Finally took a knife and trimmed each of the 4 slots in the bases to properly fit the connectors and guess what...... It rains. Rather than cut into the wiring, I've elected to use DEcosse's print and parts.

Oh yeah, when I bought the bike there was a choice involved between building a garage or purchasing a new Roadster...... THE ROADSTER WON!!!!

Are these mini relays Gregger? (the more 'cubed' shaped ones)
Re the rain - well especially since using the connectors, at least you can build the harness in your house and then just plug it in when rain stops

1 & 2 should be pretty close I would expect
you may get a small drop comparing 2 to 3, however I would think should be in the realms of acceptability.That final pigtail harness from 4-way connector to lamp socket is smaller gauge wire than the mod, but short enough length should not be too much loss.
(If it is, you can always upgrade those three wires but I believe should not be required)

Where did you source the connectors incidentally?

These terminals look the same as the ones I have in my collection. They were GM connectors (AC Delco). Notice the 1/8 inch protrusion at the top of the connector. When you manage to lock the connector in the base, the protrusion contacts the relay base slot pushing the connector over so that the male portion of the relay won't connect.

These are a bit shorter (no 1/8 inch extension) and fit into the Bosch relay base perfectly. Locks in place and the relay plugs right in. I don't have enough on hand but should be able to get some Monday.

Relay bases I'm using. Rather than wait until I got some connectors, I trimmed the slots to accept the connectors posted first.

Don't think I've seen those terminals before, but per the picture, sure can see why they wouldn't fit the socket correctly
They almost look like a fuse-holder terminal (for ATO/ATC fuses)

I meant, where did you source the 4-way connectors? One of the links I provided or did you find locally?

In the first three pics, the one on the left is a mini relay
The one in the middle is a micro relay and the one on the right is an ISO280 relay
All are adequately rated for the dual lamps current (min 20A) 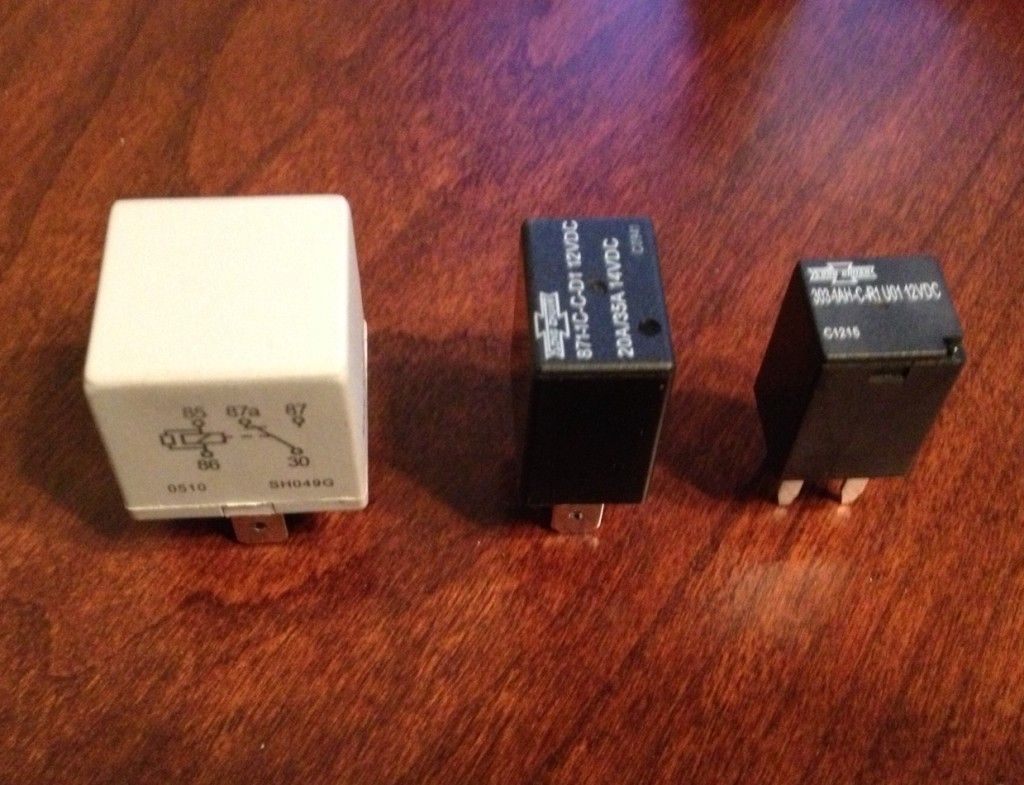 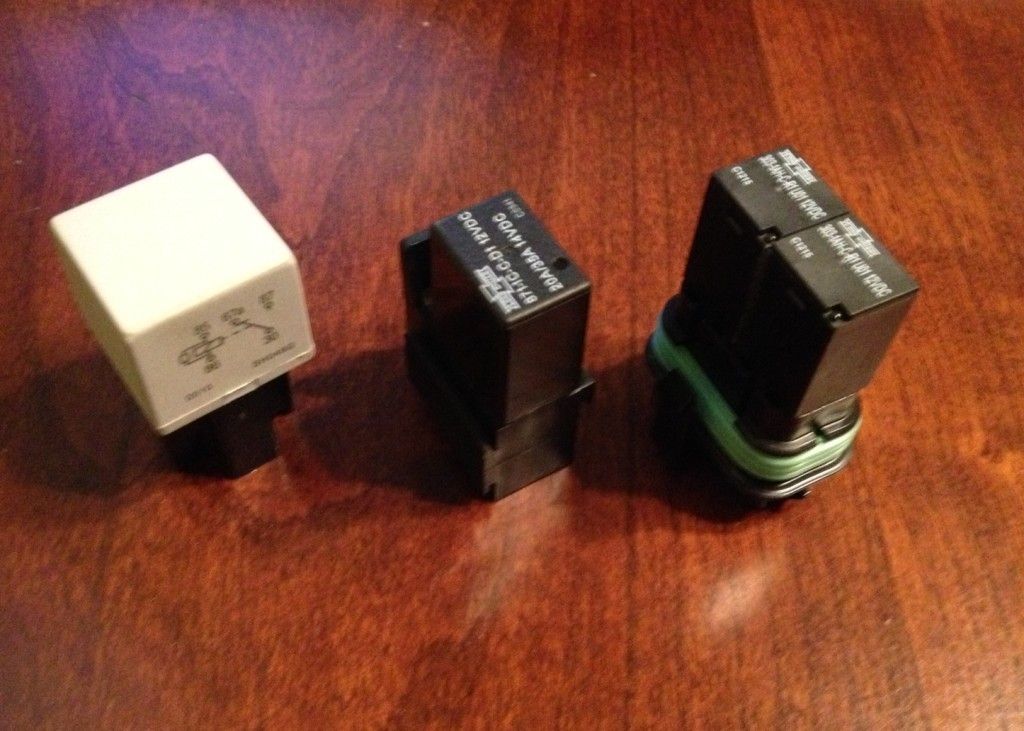 The ISO280 Relay in its weatherproof socket with cover. 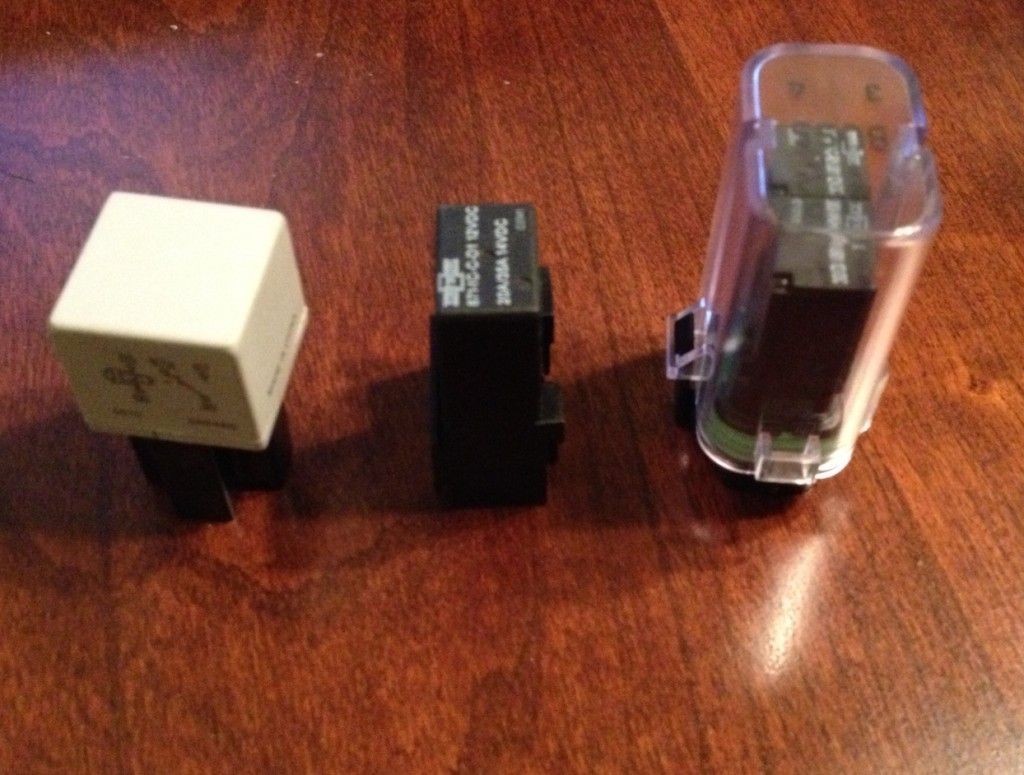 Those ISO relays are super-compact!
The socket is actually not intended to hold two relays - I found that some subtle filing/sanding of the side faces of the two adjacent relays would enable them to fit in a single socket/enclosure.
The socket actually uses sealed terminals and of course you can see the seal on the cover system.

Here is another sealed solution; ends up slightly bigger than a standard mini-relay/socket 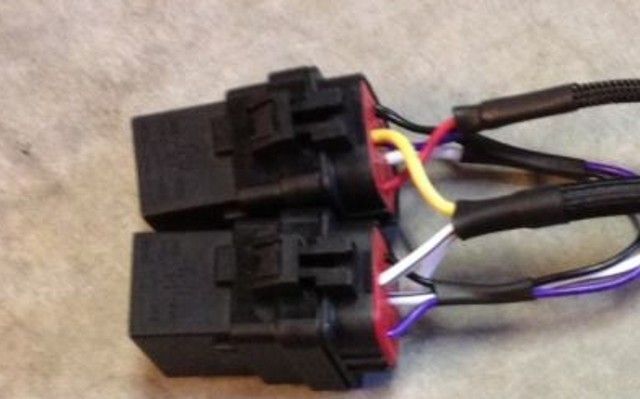 DEcosse, I used the 4th link you provided for the connectors.

Some pictures of my upgrade so far.

Picture of the bike with tank raised and access to the headlight connectors opened up with plastic side cover removed. 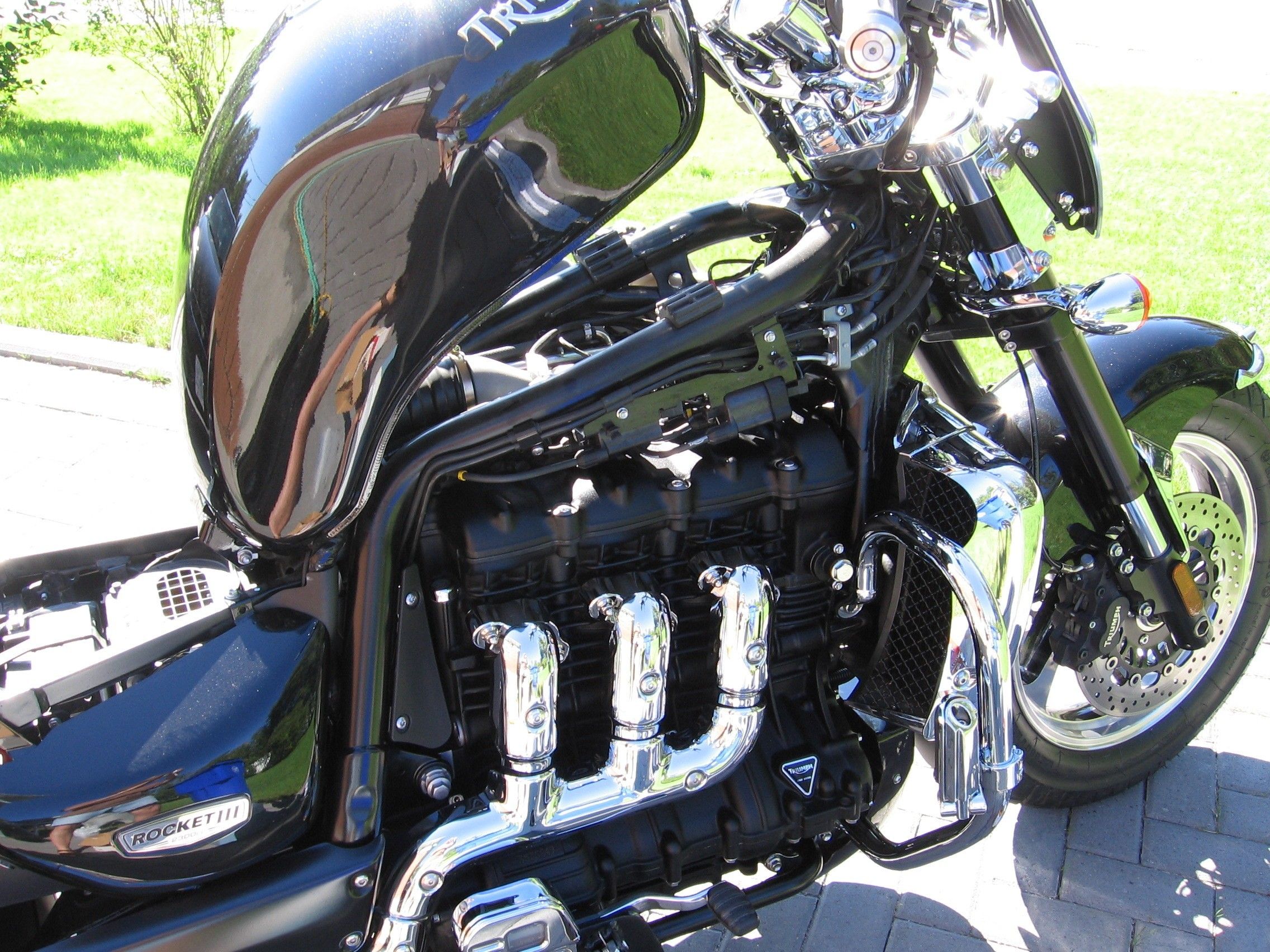 Close up of the two 4 pin mini connectors. I purchased a few connectors and pins to save cutting my harness. 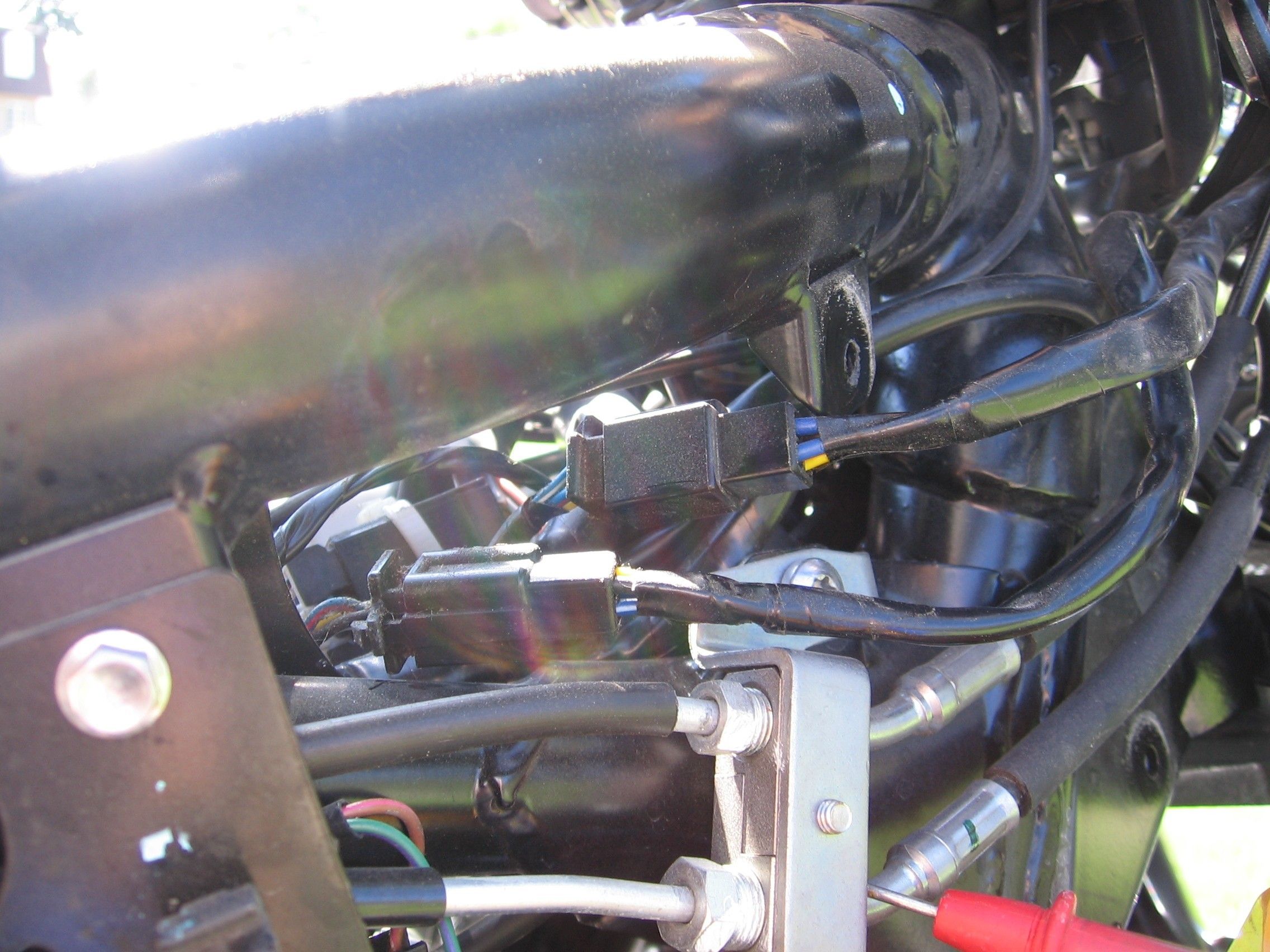 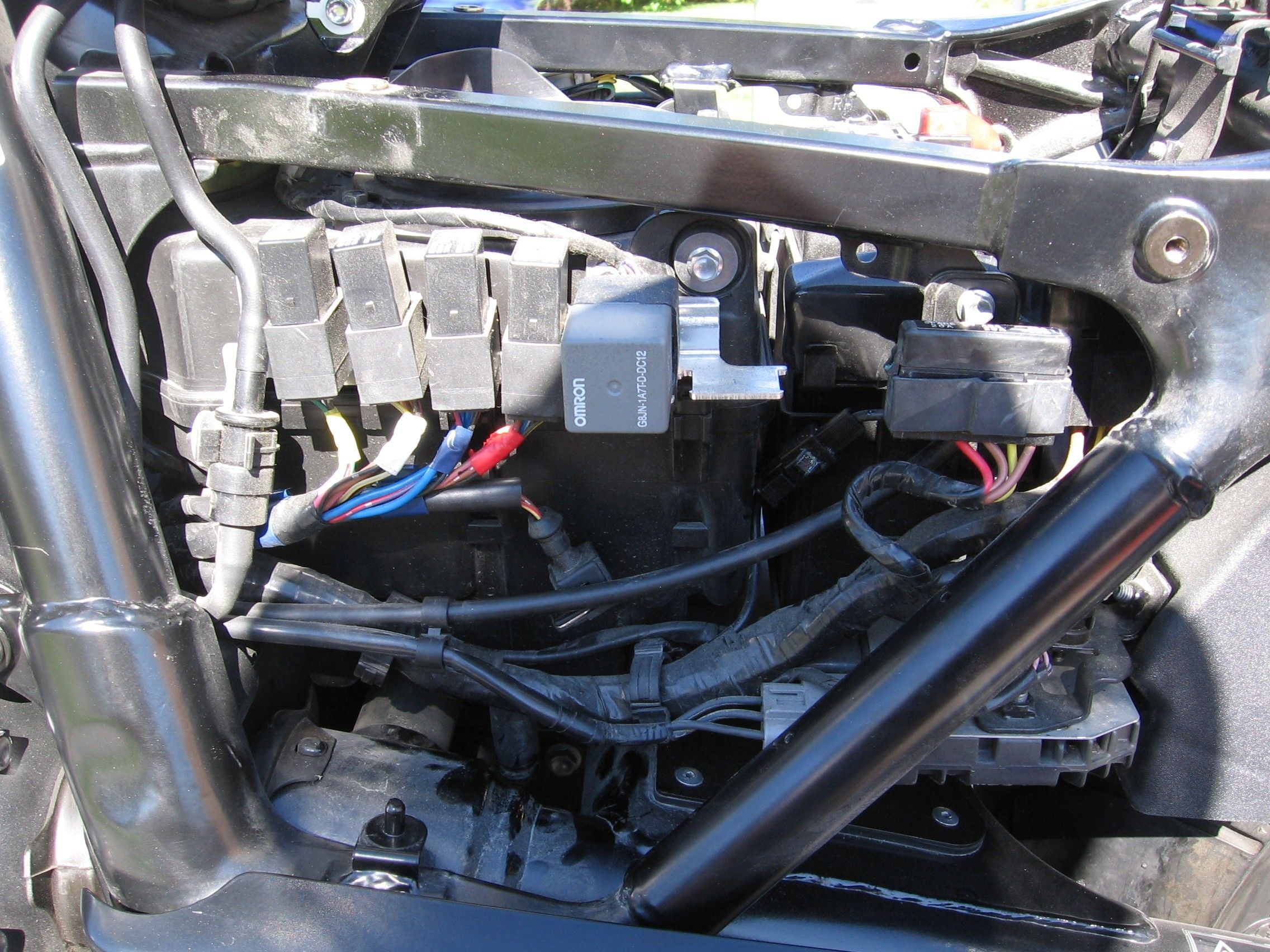 This is where I plan to install my 2 relays. I measured what I'd need for wire length and started to assemble my harnesses indoors when the rain started. 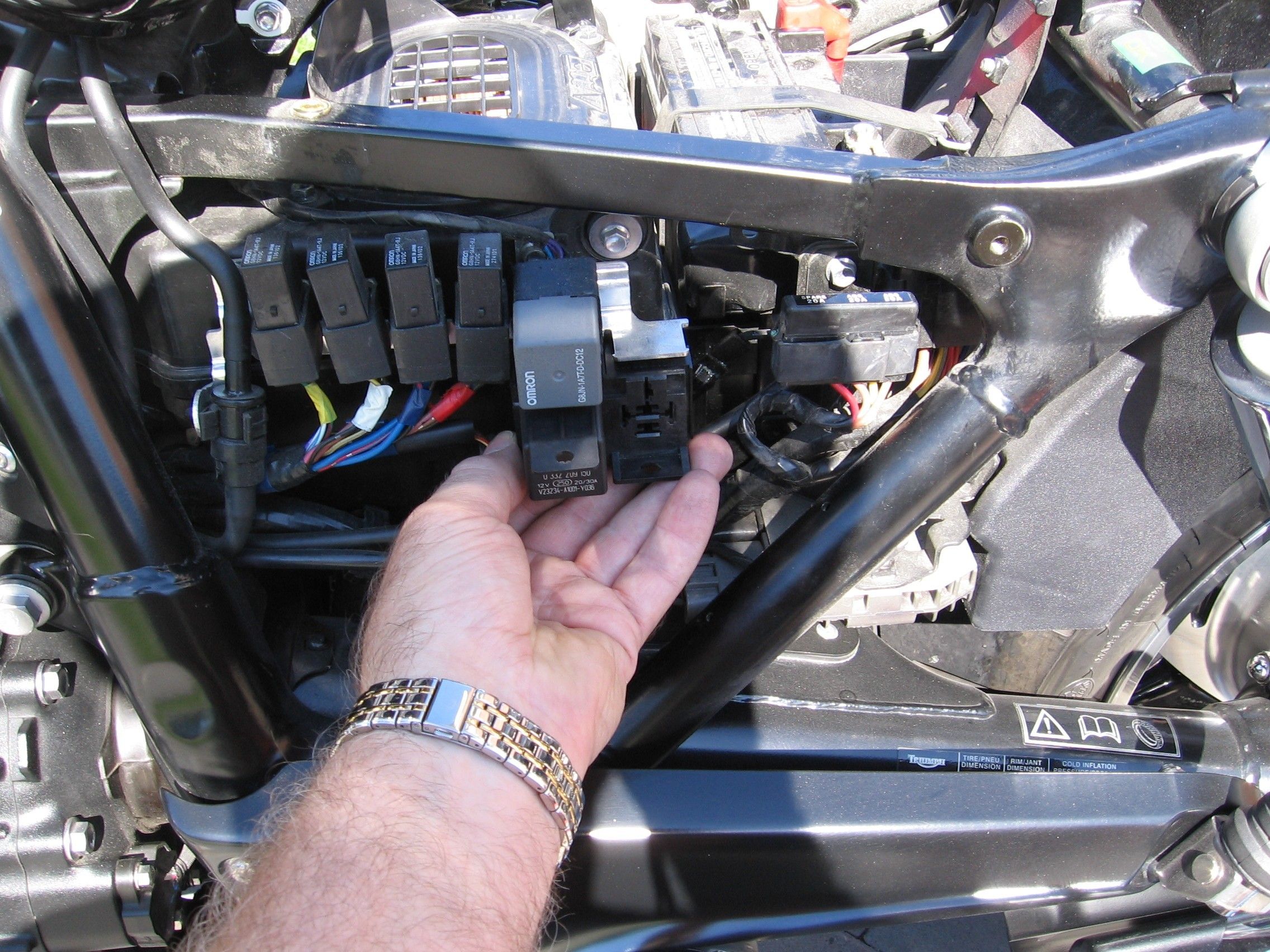 30 amp fuse holder, #12 gauge wire going to two #14 gauge wires to feed the relays. Everything was soldered and heat shrunk after crimping. 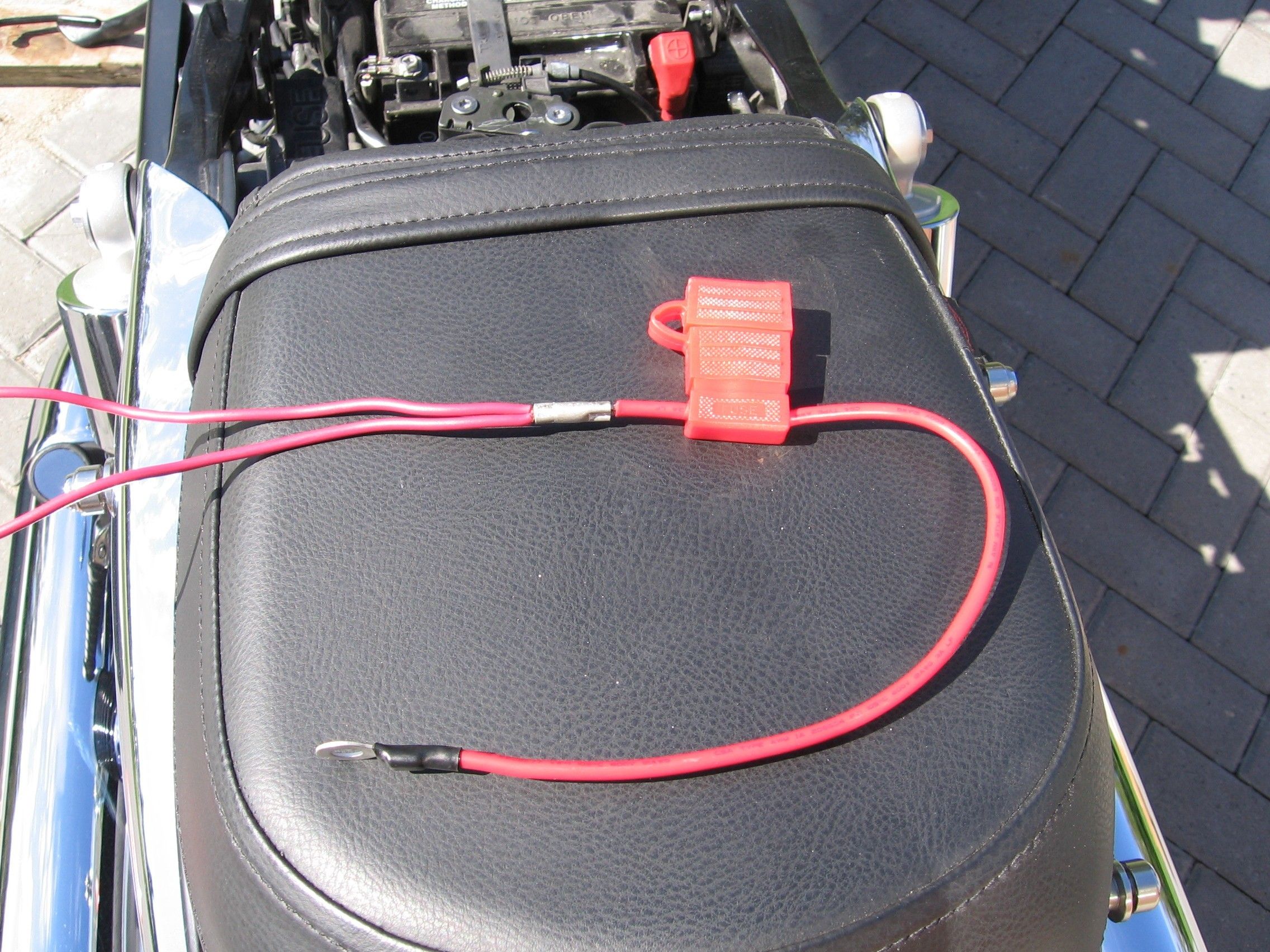 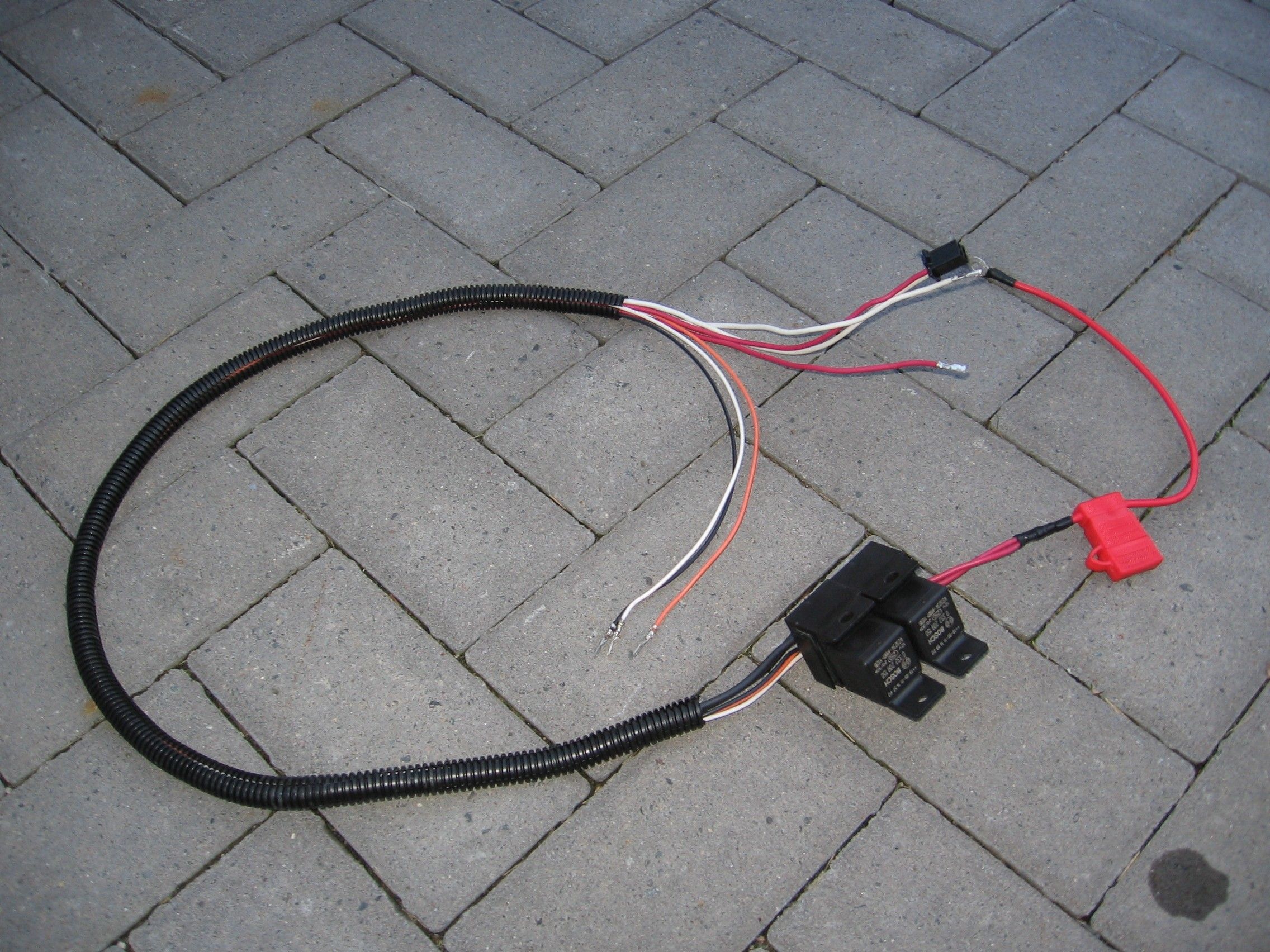 Well that's all the pictures I have for now. Rain hit hard and I put things on hold. Hopefully tomorrow afternoon I can free up some time.

For what it's worth, a little trick from soldering circuits on a boat in a salt water environment, is coating the soldered joints with clear nail polish before covering.

Auxiliary lights, can i do this?
2

This should be simple, headlights don't work
2 3 4