There's a lot of dumb **** to take in here, so to summarize...
Blank display thread is resolved by charging the battery.

Indicators Not Functioning is resolved by rewiring the auxiliary lights, the wires were pinched in installation, and they were shorting out.

Electrical Gremlins Part 4 is the same issue as what I'm going to talk about here; it remained "tentatively" resolved by replacing the battery and installing the starter rebuild kit from eBay.

Let me start by saying, I think the issue I was having is resolved. Time will tell.

The problem is that intermittently (of course) the bike will refuse to turn over the starter motor. I can clearly hear the click of the solenoid pushing the gear in the starter motor forward, but then nothing happens. I can release the start button and immediately push it again, and the same thing will happen for a few clicks until the bike decides to go ahead and turn the motor over. Once, I held the start button down until the solenoid "un-clicked," because the solenoid fuse in slot 9 burned out. For some reason, the bike had a 15a fuse in the slot, instead of 20a like the owner's manual states. I've replaced every one of the relays on separate occasions.

Before the most recent ride I went on, Bikes Blues and BBQ, I decided I was going to attempt to fix the issue from Electrical Gremlins Part 4 by rewiring and confirming the wiring logic of all of my dumb-ass additions to the bike.
I've replaced my stock horn with a pair of dual tone horns. I'm looking at what I did, and the way it's wired. It would appear that I replaced the stock horn entirely with a relay, and used that relay to trigger power from the battery to the new horns. This was confirmed by @DEcosse as a good way to wire this, so I checked all of the connections and everything was solid.

I've already put in the new starter motor contacts and solenoid kit from ebay, and I've replaced the starter motor (motor portion only) with the toyota one. I've also doubled up my battery cables, as @Mad Dog bought Mitzy's upgraded cables for his touring and gave me his old battery cables. 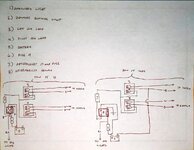 After a hard couple of days, it was done and I went to Arkansas. The problem persisted throughout the trip, and the rewiring had apparently had no particular effect on the starting issue. While riding some twisties somewhere in Missouri, it occurred to me that waaaaay back when I thought the ignition switch was bad on my bike I had wired a secondary "killswitch" wired into my ignition switch that sits under my left side panel and that it might be the problem, because it's just a 30amp rated standard toggle switch, no IP rating (not waterproof). It was also wired into the ignition switch power (white wire on my touring) with about 25' of 10ga wire, because I had previously thought it would be a good idea to have "extra wire" somewhere on the bike so that I'd have it if I needed it. Why I ever thought the "extra wire" needed to be wired into an active circuit, I cannot imagine.
I had rewired and confirmed the wiring logic of all of my previous additions to the bike, but I had forgotten about the switch. So, at the end of the week last week I lifted up the tank and cut the wires to the killswitch and soldered the power wire to the ignition switch back together. This makes the wiring to my ignition switch completely stock in configuration.

The issue has yet to repeat.

I hope this works for you.

Took the clutch switch apart, cleaned and re-greased it. Tested resistance across it and had no issues. When I tested it previously I didn't understand that the switch was open when it was depressed and not when it was released. The search continues.

Sure, I appreciate any help I can get. I know you and I have tried to suss this out before, and I thank you for sticking with me.

If the starter solenoid is clicking then everything is fine up to the starter relay so what we need to do is try to figure out why the starter won't spin.
We need to know the voltage when the starter clicks. So 1st we multi meter set to 20 volts on dc volt range black probe neg on the basee of starter the red probe on pos bat post then attempt to start (if it clicks) the voltage will tell me what to do next.
When it clicks if the voltage is above 10 volts then battery is probably ok
If it drops below 10 volts your your batt is to low.
Assuming the meter reads around 12 then u need to repair the solenoid contacts inside the starter. I know u said they r new but u still have a problem with it.
We will just see how it goes.