Why did you choose this system vs. a P.C. system?

Gerald said:
Why did you choose this system vs. a P.C. system?
Click to expand...

The short answer is, PC-V is not a good solution on any modern Kawasaki with electronic throttle, particularly the H2 lineup.

The longer version is:
Kawi control strategy uses throttle tube position multiplied against electronic throttle valve table value as a percentage, then looks up the resulting value in the fuel/timing tables as throttle position to determine fuel and ignition values.

PCV is ETV unaware so it doesn't provide proper control if/when the traction control, antiwheelie, or launch control activate. The ETV table is where most of the Kawi restrictions reside, by simply opening the throttle fully and fixing the heavily neutered ignition values, over 100hp is gained after 12000 RPM without changing any hard parts on the bike.

The stock power peak at 10700 is completely artificial and the result of the stock ETV/IGN tables turning off the fun by closing the throttle to around 40% despite the rider holding it at 100. IGN goes from 21 degrees down to 11.5 degrees!! Fuel AFR goes from ~12:1 to sub 10:1. Kawi smothers the top end.

This is what Nate at 2WDW achieved on a Brock's Full exhaust using Woolich with a conservative tune on a bike sold as new with warranty intact: 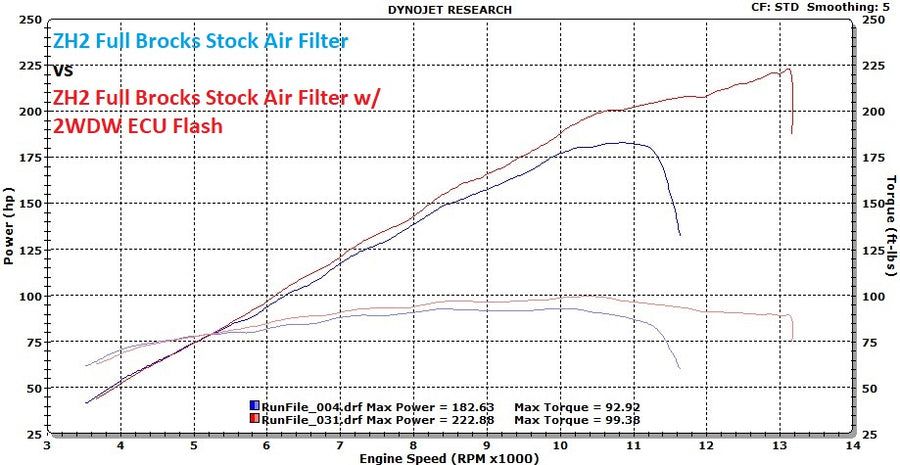 I almost bought that bike instead of the one I bought, but I was unaware that 2WDW tuned it so didn't trust the tune (some of the mail in flash services are....unsafe).

I've seen up to 245whp achieved on a bike with just exhaust and tune using less conservative timing values. Safe? I doubt it on stock pistons.

I am starting off by loading the EU/AUS ECU map in mine, it has less choke on the top end, but is still restricted quite a bit.

The nice thing about the Kawi method is this: once the fuel and ignition are setup for a full power rider mode, they can then be dialed down without requiring additional Dyno time for less rowdy rider modes by adjusting ETV table only, and fueling stays accurate, all rider aids intact.

I'll be taking the 2WDW custom map and gutting the power for rain mode, and setting the mid-mode close to stock. In that way I have three distinct modes which will essentially work out to be Rain, Touring and Sport, roughly 100hp/170hp/220hp respectively.

It's super cool that you can increase power without changing any hard parts!

I think so too! At the point these bikes are at I can totally understand Kawi's decision to limit them, it's exceedingly easy to enter a corner way too hot without meaning to do so, just like the Rocket 3, especially if your short shifting, low drama torque is deceptive, as you all know.

The insanity is that a factory 1 liter engine has the hardware to make around 250hp/liter. Translate that math up to bigger engines and it really demonstrates how nuts it is, it would mean with warranty we would get:

Most of those exist but they're quite far from stock engines and certainly don't have warranties lol.

I'm actually glad I didn't buy the VanDemon or other crazy loud exhaust. The ZX10R Header and muffler are quite mild for noise (much quieter than my rocket!), and it flows very well (I'm sure you're familiar with the noise of a decat ZX10R .

Well, progress has been made.

My service manual finally arrived... Kawi manuals are quite similar to Triumph manuals, thankfully. Was expected something more like Honda manuals, (which drive me nuts).

Found my first wtf were they thinking. If the EVAP purge valve is disconnected from the ECU, the bike goes into limp mode Left it in place, but only connected electrically, which solved limp mode.

The second wtf is in the mapping of the US bikes vs EU bikes. US bikes have ignition timing absolutely neutered in the 2%-10% range from 2000 to 5000 RPM at 15 degrees for that whole region, but the EU bikes have a normal progressive curve in that area. I've copied the EU values over and done some rudimentary super safe derestricting.

Sunday I'll toss in some good gas and go riding so I can get a bunch of datalogs and correct fueling a bit. Mostly want to find and ETV table that feels natural and tame around town but rowdy AF when I get on it.
Last edited: Aug 25, 2022

Finally some good development work has been done ...

I have found my 'Exit the world' bike- the original Widowmaker!

Caught a close call on my bike cameras
2

Thinking about a new ADV bike