Sure is worth checking out!! Thank you.

With all you've been through on this saga you deserve a little fun. I might suggest labeling the new starter toggle with a little sign that says something like "Light After Burner" or
" Arm Missile" or "Warp Drive".

CrzystghndKC said:
With all you've been through on this saga you deserve a little fun. I might suggest labeling the new starter toggle with a little sign that says something like "Light After Burner" or
" Arm Missile" or "Warp Drive".

Hahaha I could get something made for the switch. Maybe "NOS"

Late last week I pulled the left side cover (opposite side from the starter relay) and pulled the relays on that side and plugged them back in, unplugged the voltage regulator and plugged it back in and again pulled all the fuses, plugging them back in. The bike has started dozens of times without a single click using the starter button not my toggle. WTF, besides the fuses are one or more of the other components related to starting the bike?

Also, the starter relais is connected to the ECU (pinB24). What happens inside the ECU is complicated….

So yes, there are more components related to starting the bike

Also, the starter relais is connected to the ECU (pinB24). What happens inside the ECU is complicated….

So yes, there are more components related to starting the bike

Click comes from the solenoid and yes I did run a wire from the battery to a fuse, to the toggle switch then to the starter.

Yes, but that's not the wire I mean. Your wire (I think) is the wire that I drew in the picture. There should be a wire from battery+ to the starter in the harness. The one in the top that I put an oval around. Maybe there is a problem?
A couple of times I had a similar issue with starting. Only, my starter did turn, but very slowly. As if the battery was nearly dead. But the battery is in perfect condition, it starts always perfectly, apart from that one or two times. That made me think of the 12V feed to starter being faulty, since the starter runs on a direct +feed from the battery. I haven't made time yet to check it out on my Rocket, it's been quite a while since I had the issue so not in a hurry.... 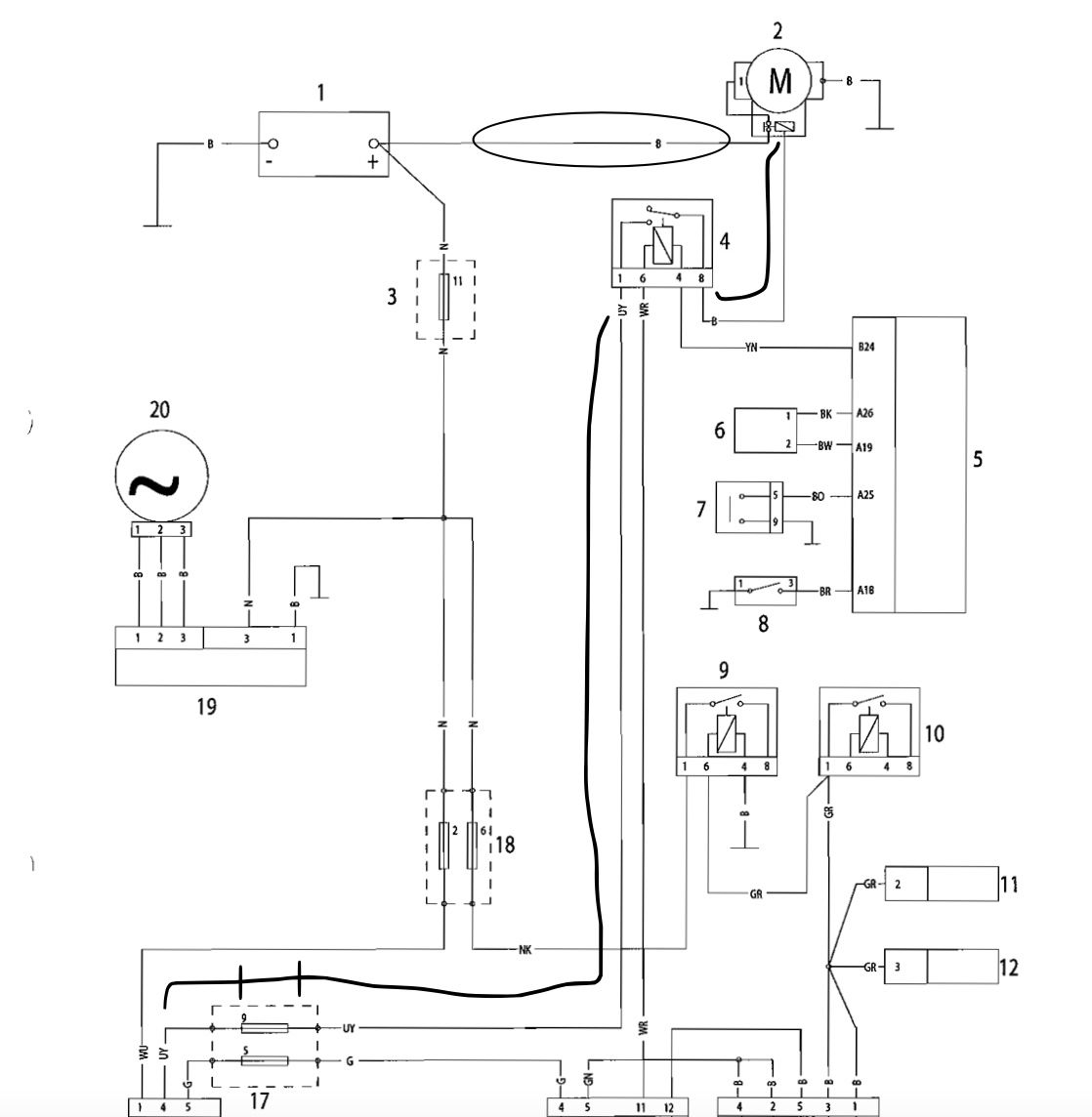 Just so you know, every time I load the page without my glasses, cl looks pretty much like a d. Carry on.

vindex1963 said:
Late last week I pulled the left side cover (opposite side from the starter relay) and pulled the relays on that side and plugged them back in, unplugged the voltage regulator and plugged it back in and again pulled all the fuses, plugging them back in. The bike has started dozens of times without a single click using the starter button not my toggle. WTF, besides the fuses are one or more of the other components related to starting the bike?
Click to expand...

With all these disconnecting and connecting make sure you put some dielectric grease in there, I had a problem with my clock and Trip meters resetting everytime I shut it off, the wire with constant power to the instruments just pulled off when I touched it, small wire's, your dealing with bigger gauge wire, but give a little tug on the wire itself, don't try to pull it out just to see if it's loose in the connection, but I also found a great way of cleaning connectors on YouTube spray some contact cleaner in after to dry it out, and don't forget the grease, it's really quick and easy, I let it soak for about a half hour, make sure you disconnect the battery before doing, I just unplugged my instraments without disconnecting the battery and fried the speed sensor on a R3T, easy for me I rush through everything and read direction's when all else fails, shade tree mechanic, done by necessity, can't afford a real one, I just put tire's on at the shop, $900 complete and they told me I need break's, wanted $350, I just did the fronts myself, very easy, just replaced the pads with aftermarket made in China like $15, Triumph wanted $70 for front and $70 for back, and I changed the fluid for I don't know $5 maybe, I do get a lot of info here though, it's a 2008 but new to me, just got it

a really like it, but I'm no electricity wiz, if you can get Decrosse, on here or something like that I don't know the exact way he spell's his screen name, but he is definitely a wiz, I've read a lot of his post's, definitely get a manual if you don't already have one, I'm pretty sure you can download one on here, trace the circuits and check the voltages while you're cranking, I don't know what the percentage drop allowable is, maybe someone here can tell you, but it definitely sounds like a bad connection, which will get hotter than the surrounding area, but when I was searching I put dielectric grease on everything, even use a probe light if it dimms while you're cranking you found your bad connection, does it start okay after you just take it for a half hour spin and the battery is charged, are you sure the alternator is working and charging the battery, at least 13.5 volts I think it is, and I think the Max is about 14.5, if not could be the voltage regulator or alternator, take it to the local auto parts store and most of them check your whole charging system and battery for free, hey does anyone use the Mobil delvac gear oil for the final drive that's what I'm using, my manual says to use mobilube shc fully synthetic hypoid oil, I googled it and it didn't come up and searched the Mobil website and couldn't find it, I asked the shop and they said they use Motul 75 90 W synthetic V-Twin, I didn't know the brand but I've been using Mobil 1 products for a long time so I saw something on here about the Delvac and read reviews on Amazon so I used it, seems a little quieter and maybe a little less vibration, I don't know maybe I'm wishful thinking, but I don't know what was in there, it came out as Black as the bike and smelled like regular gear oil, good thing I could only find a gallon, I'm going to change it again in 500 miles, I can change it 21 time's with a gallon, got it on Amazon for $53 Walmart had a quart for$16 but you had to take delivery, no ship to store for $10, so I figured for twice as much I get 4 time's as much, just an FYI, good luck with your starting problem, is the solenoid getting hot anywhere like at the skinny wire's on the coil, if it's clicking it's dropping out, I would consentrate on that, the connection at the ignition switch, to the ground, the wire on the other side of the solenoid. That's my guess, put an ohmmeter from the ignition connector to the ground, if you get more than about an ohm or 2 it's in between there, I did take 1 year of electronics in HS and built a low voltage transformer, just enough to get me in trouble, but first whenever disconnecting any connections that go to sensors or the ECU, it doesn't take much to fry them, 6 volts and they are toast, I think, computers usually run on 5 volts, you hit them with 12 well you know, read disconnect the battery unless you're checking voltage and don't short 2 wire's out to one another, a new ECU is $800 so go figure, I've been picking up used sensors whenever I see them cheap, got the speed sensor for $60 then when it came I found another one for $23, bought that one too, a new one is $150, got 3 MAP sensors for $12, tip over sensor cheap, infill pieces cheap don't need them yet but the guy drilled a hole in the right side one and put a rocker switch in it to shut off a fuse block, I don't know exactly what for but I figured if one day I want it totally stock I'll have it, going to try to clean the MAP sensor with break cleaner, saw a guy do it on YouTube so I figured what the hay if it messes it up I'll have 3 to install, one of them have to be good LoL

well good luck, I hate electrical problems. One more thing pull the clutch in when checking continuity of solenoid coil connections from one end of the circuit to the other, I forget what bike you have, I think it's a 2011 R3T right? Confirm and I'll try to tell you what color wire's your working with in the switch and stuff. GL again and confirm it's in neutral
Last edited: Jul 21, 2021

starter clicks only when motor is hot

Starter relay issue? am i right?