A Free Honda Valkyrie, A Cautionary Tale.... (Part One)

A couple years ago a fellow Rocketeer on this forum was looking to get rid of a 1998 Honda Valkyrie and was looking for a volunteer to just give it to. A freebee. Leigh G. you may remember how that email conversation went better than myself but as I recall it, you wanted to close out your storage locker and save the annual fees. So in exchange for a free bike the lucky recipient of the Honda got the bike and you got free storage of contents in your locker (and I still have your stuff, (and a spare bedroom if you ever want to come pick it up)). In this bargain all I could see was I got a free motorcycle that hadn't been ridden in a few months (like 50 or 60?). Anyway it was too tempting to pass up so I talked my wife Cheri into a road trip to Phoenix to retrieve the bike and clear out Leigh's locker. I saw it as an opportunity to get out of the house, see some of the desert Southwest and spend some quality time in diners, drive-ins and dives. (Guy Fieri not withstanding). Cheri agreed to accompany me as long as I was willing to stop for her tiny bladder and need for stretch breaks.

Thus the trip to Phoenix was a bit longer than I expected or anticipated because Cheri had to stop at EVERY trading post in New Mexico and Arizona for a stretch, a pee, and aquisition of Native American jewelry, bits, bobs, pots, art lots, bric and brac. After a day on the road I was getting concerned my 6 by 12 foot trailer may not be large enough to haul back everything we were picking up along the way, including filling the bed of my pickup I was hauling the trailer with, before we even got to Phoenix. Luckily the cube Leigh had rented wasn't that big and was mostly empty except for a few boxes, a large duffel bag, and the Honda. I was able to get the bike loaded after getting the storage property manager and his assistant to help me push the bike up the ramp of the trailer. While on the road and thinking about the condition I might find with a bike sitting in a storage locker for years I had briefly considered stopping at a Walmart to get some tire air cans, but was increasingly in 'get there' mode to prevent Cheri having yet another shopping opportunity. The tires had about 5 pounds of air front and back and rolling that behemoth with squishy rubber was like pushing your average bass boat around your yard, without the benefit of any trailer. The bike appeared to be really complete and would only need some TLC to get it running again.
Once loaded and locked down for the trip home I was ready and anxious to make the dash home to get this new project underway. The trip back took a little longer than I anticipated because we took a different route back, Cheri thought it would be faster (she'd consulted her out-of-date Atlas), the route was shorter mileage wise, but it had the distinct disadvantage of having 80% more Native American trading posts than the route we took getting to Phoenix. I now live in a Texas pueblo.

Unloading the bike was interesting. My son-in-law came over to join in the festivities. First thing I did was put some air in the tires so rolling resistance would be minimized. If you're unfamiliar with a Honda Valkyrie it's a flat six cylinder engine mounted in a bridge girder frame. The bike weighs as much as a 68 Cadillac Deville and has the turning radius of a 5 ton commercial truck. With flat tires it's a lot less manuverable. I had used a trucker style bungee (the kind they use to hold down a truck tarp) to lock the front tire in the wheel chock by wrapping the strap around the chock top rail and then putting the S-hooks in the brake disks to prevent rearward travel. I do this because the rear stabilizer straps mounted on the floor of the trailer are ratcheted and can pull the front tire out of the chock if it's not locked down (I found this undesirable trait, much to my chagrin, when I brought my Rocket back from Maryland in 2016 and it was vertical only because the straps were equally tensioned, when I saw it freestanding in the trailer I nearly dropped a load in my shorts).

I unlatched the rear straps and the bike popped up as the tension was relieved from the shocks, afterwhich I asked Tom to unhook the bungee holding the front tire. Room in my trailer was at a premium as the bike took up a lot of space since it's got bags and a billboard windshield. I was in the back and Tom was working through the side door in the front. After he got things loose up front I rolled the bike out of the chock whereupon it stopped on its own accord. I though maybe I had bumped the front brake lever and the front brakes locked. On bikes that have been unattended for extended periods, the hydroscopicity of the phosphate esters used in DOT brake fluid can cause the caliper pistons to hangup once pressure is applied to the system. I asked Tom to get me a hammer so we could drive the brake pistons back and free the disks from the pads. After we put some padding over the calipers I tapped the blocks to free the pads. I then pushed the bike forward and it rolled a few inches easily and I then rolled it back and it stopped again, exactly wher it stopped initially. Now this was a puzzler. I thought maybe it had slipped into gear, but that didn't make a lot of sense. After a few minutes going through my mental list of possible causes I noticed a bungee S-hook had wedged itself between the caliper and disk. Tom had pulled only the right side of the bungee off and left the opposite S-hook still in the rotor. Well that explained the odd behavior of rolling in one direction for a short distance. Once we were able to extract the S-hook it was much easier to roll. It still felt like a ton of dead weight on two wheels but we could get it out of the trailer.

Where I had parked my truck to unload it was in the street at the side of the house where my driveway is, my drive being too short to hold my truck and trailer and lower the ramp and roll a bike off without blocking traffic, in both directions. Because I was going to have to work on the Honda to get it running anyway I decided to just park it on my Handy lift. To get it there I had to move my Rocket and Yamahas (XS1100 and RD350) out of the way, mount its loading ramp on the lift and then roll the Honda up the drive, up the ramp and into the front wheel vise. So we had to push it up my driveway first. Now it's a standard length driveway, typical for most urban dwellings. It's one disadvantage is it's really uphill all the way. Now Tom is a lot younger than myself and thus in better physical condition. He and my daughter regularly exercise and routinely participate in exercise groups weekly. That said, by time we got this Honda on my Handy lift we were both contemplating how many symtoms of cardiac infarction we were experiencing. For about what seemed an hour to me there was a noticeable vacuum in my garage because I couldn't find any air. After the sparkles cleared from my vision I was truly elated my driveway wasn't 3 inches longer than it already was, otherwise we might not have made it. After three weeks of recovery I was ready to tackle the prospect of sorting the Honda and getting it back on the road. Cheri was ready for another road trip.

Your trailer experience with an unhooked and free standing Rocket's impersonation of a Uri Geller conjuring trick just proves that Phat rear tire is a Godsend!

I box-trailered my project Roadster out to a farm shed about 70 miles away and thought with my rocking U channel front wheel clamp and special motorcycle wide rear wheel tie down ratchet system I would be perfectly safe and it felt rock solid with the side stand up and vertical.. OK, the trailer had the tailgate lowered to fit it in but it was also the only tie down point using the hinges to hook up for the rear wheel ratchets 'S' hooks. 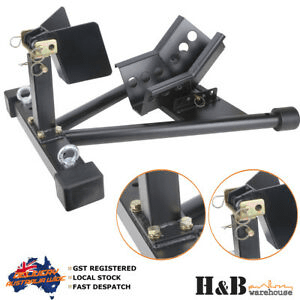 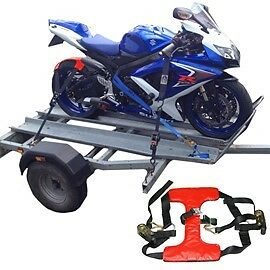 I had though, made the FOOLISH mistake of having the front straps pulled down to the SIDE trailer rails.
Luckily I stopped to check about 20 miles from home and despite still being perfectly upright it was completely out of the front chock with both front straps loose and was only being held in and up by the rear wheel strap which had gone from being at 12 o'clock to 10 o'clock and only the tension and mass of the bike when it rolled backwards and the "S" hooks round the gate hinges kept it in the trailer!

ALWAYS tie down the front bars to a point forwards, especially when using a rocking clamp.

@atomsplitter great intro to a hopefully short story. As much as I love a great tale, I do hope the rebuild is not as painful or long as others have been.

A great start to a story. I have missed your story telling capabilities.

btw, If anyone has not read @atomsplitter's books, which he has in his signature, then I highly recommend that you get a copy and read them.

Thanks for the kind comments, Part Two will arrive after my vacation next week (should I survive that experience).