Jessica the 3R 2.5L has had a small make over

As much as I like the stock R model, I really do need to get the GT bars. I have made a few alterations to her today. I really shouldn't have as I slice my finger open on Friday and had to visit the local urgent care center to get a stitch (steristrip) to hold it together and it hasn't had time to heal, but I thought I'd give it a go anyway.

First up, I reset the suspension to factory defaults. The bike has been a demo, albeit for 160 miles only, but I did find her too firm on my maiden voyage and when I checked the adjustments fore and aft, all 5 were slightly different to the book settings and damping - rebound on the rear beyond the suggested range (but only half a turn).

Next I lowered the foot pegs, easily acheived as it's only 2 bolts / blanking plugs each side. I found it more convenient to remove the gear shift connection to the gearbox from the splines to get the torx socket square on.

I added a Powerbronze small flyscreen in dark tint, looks really nice IMHO, YMMV. Again, an easy task with 4 screws... I was on a roll! 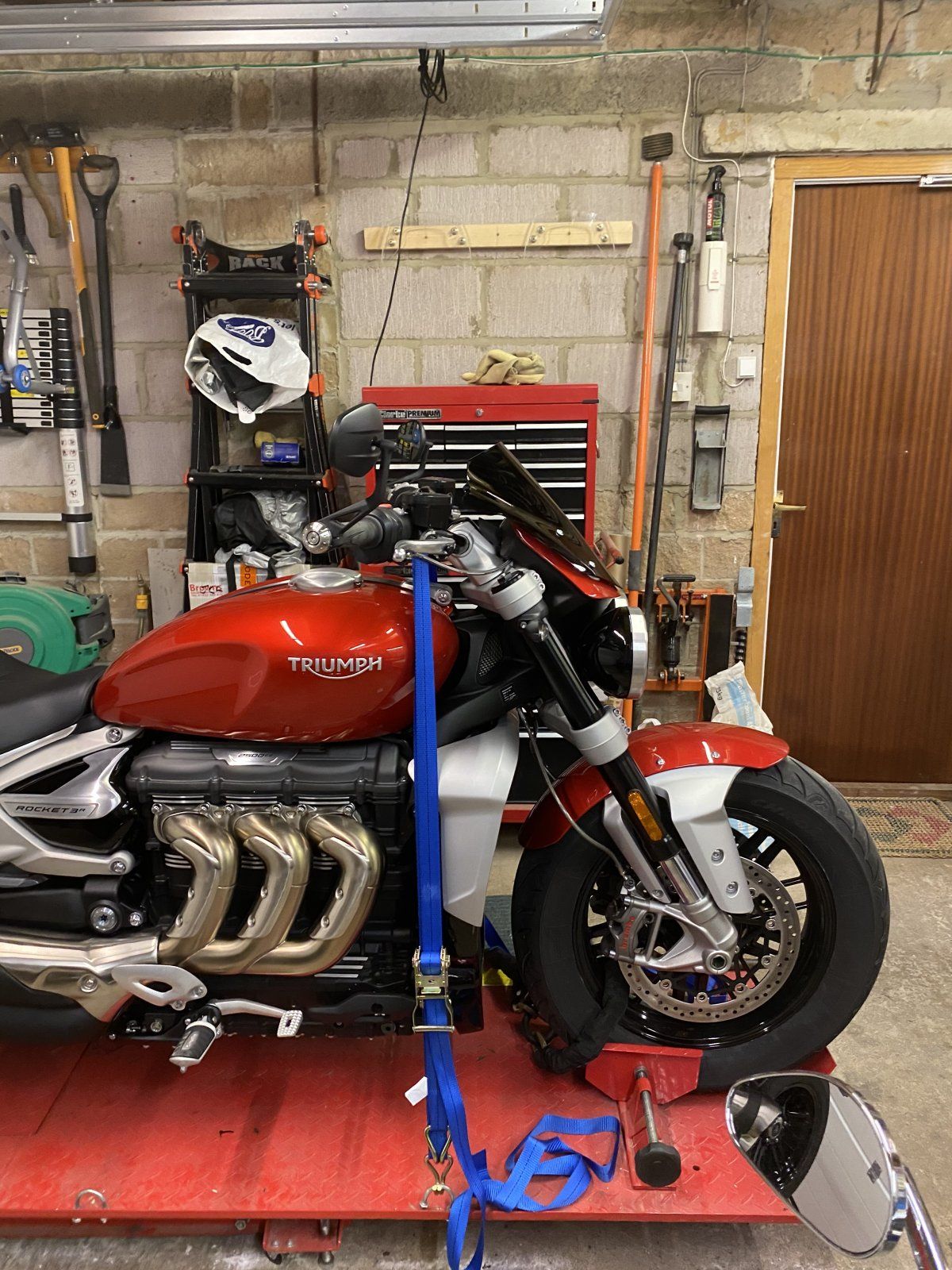 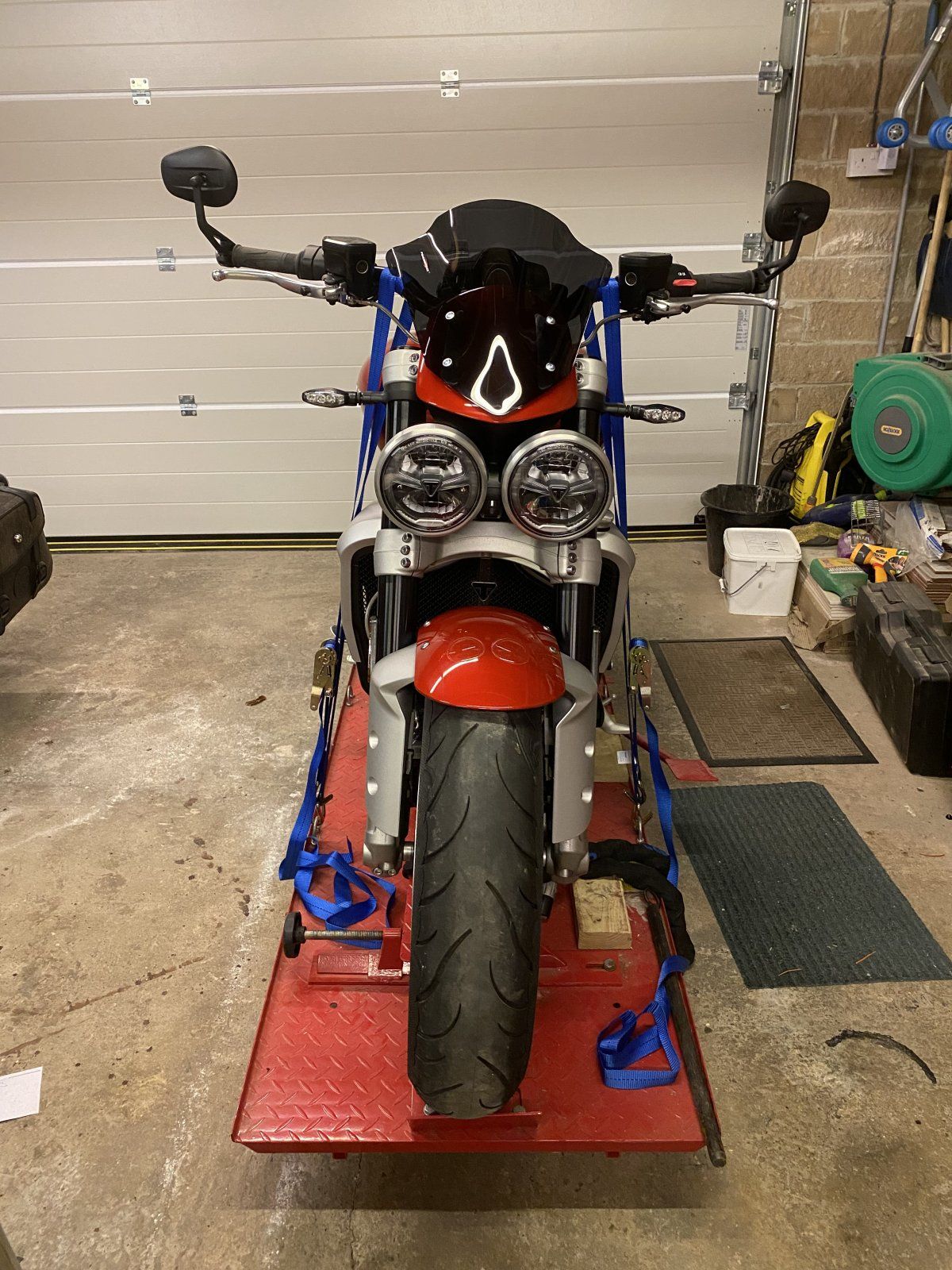 I had a few things to do with the rear end, I had a Powerbronze rear hugger to fit, I wanted to move the licence plate and indicators underneath the rear light and fit a Smart Brake System, so I thought I'd tackle them all together.

The hugger, was again easy to fit, but once I removed it I left it off as I knew I wanted to address the exposed wiring and also the wires to the rear guard assembly needed moving.

As a comparison, here is the PB hugger (still with protective polythene on) next to the original. 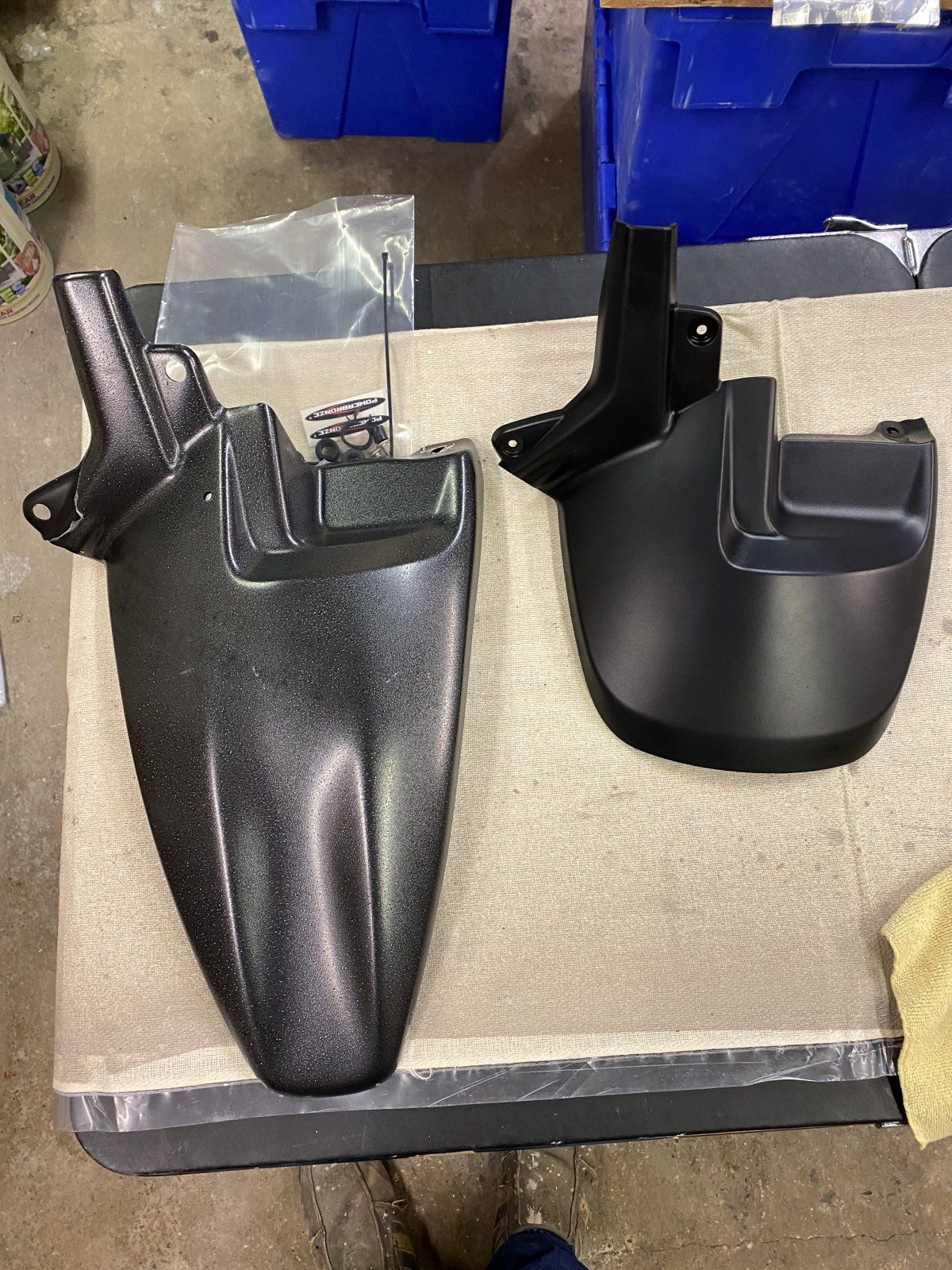 and then one on top of the other... 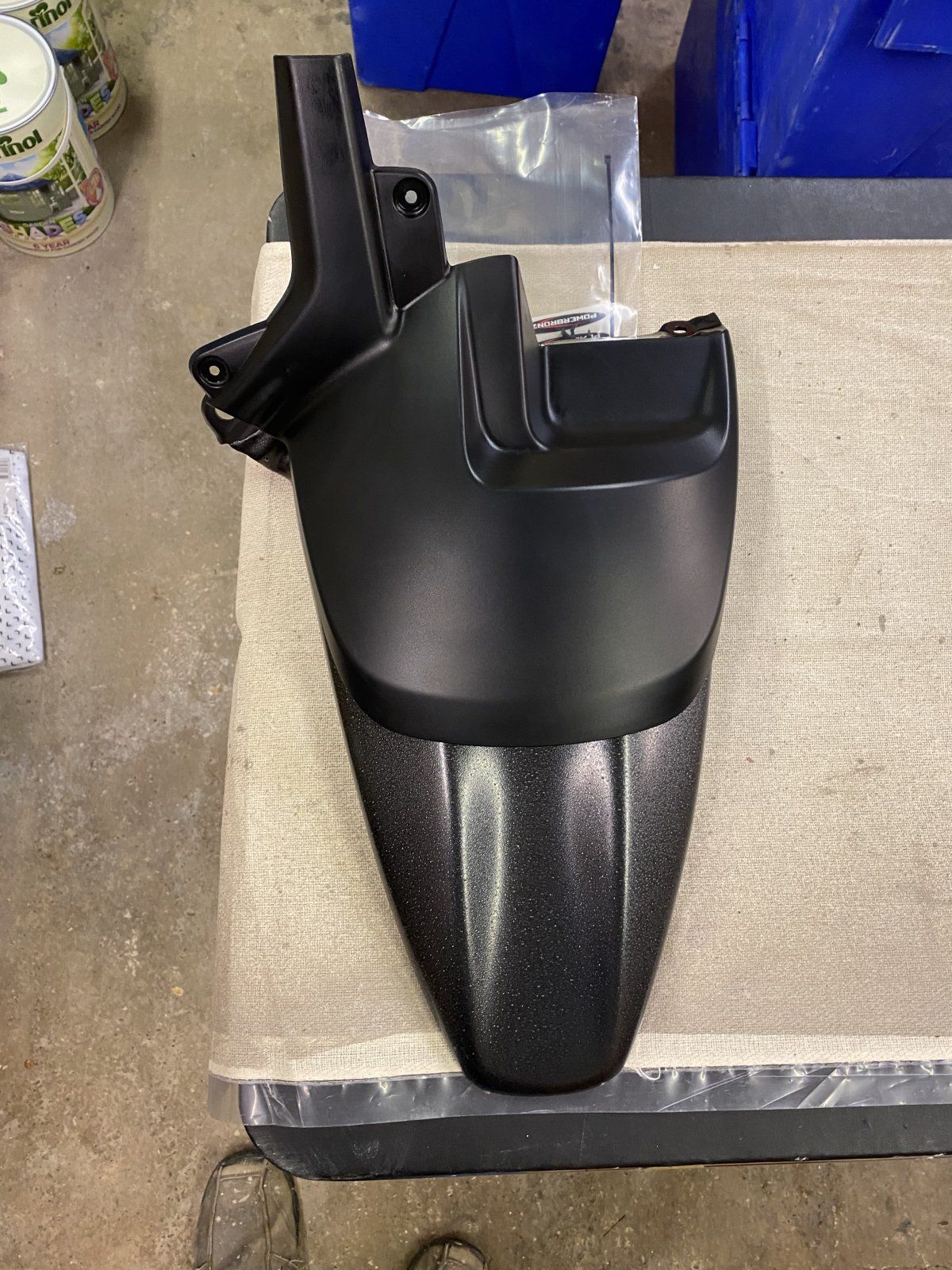 The fixings are made from a cheap metal and I will replace them at some stage with SS variants.

I bought a Fender brace for MX mudgards (inspired by Larry M's suggestion in another thread), I knew I would have to make some bends, just did not know how many at this stage and removed the under guard from underneath the seat. There are 2 screws (shown in the picture put back in their captive nuts for safe keeping) that need to be removed and 2 more in the seat cavity, either side of the tail piece that need to be removed to release the under guard as the tail piece holds it captive. It took me a while to figure this last bit out, I undid every screw I could find apart from the ones on the sides to start with and it just would not move... I put them all back in once I discovered the screws on the sides as it is not necessary to remove them. 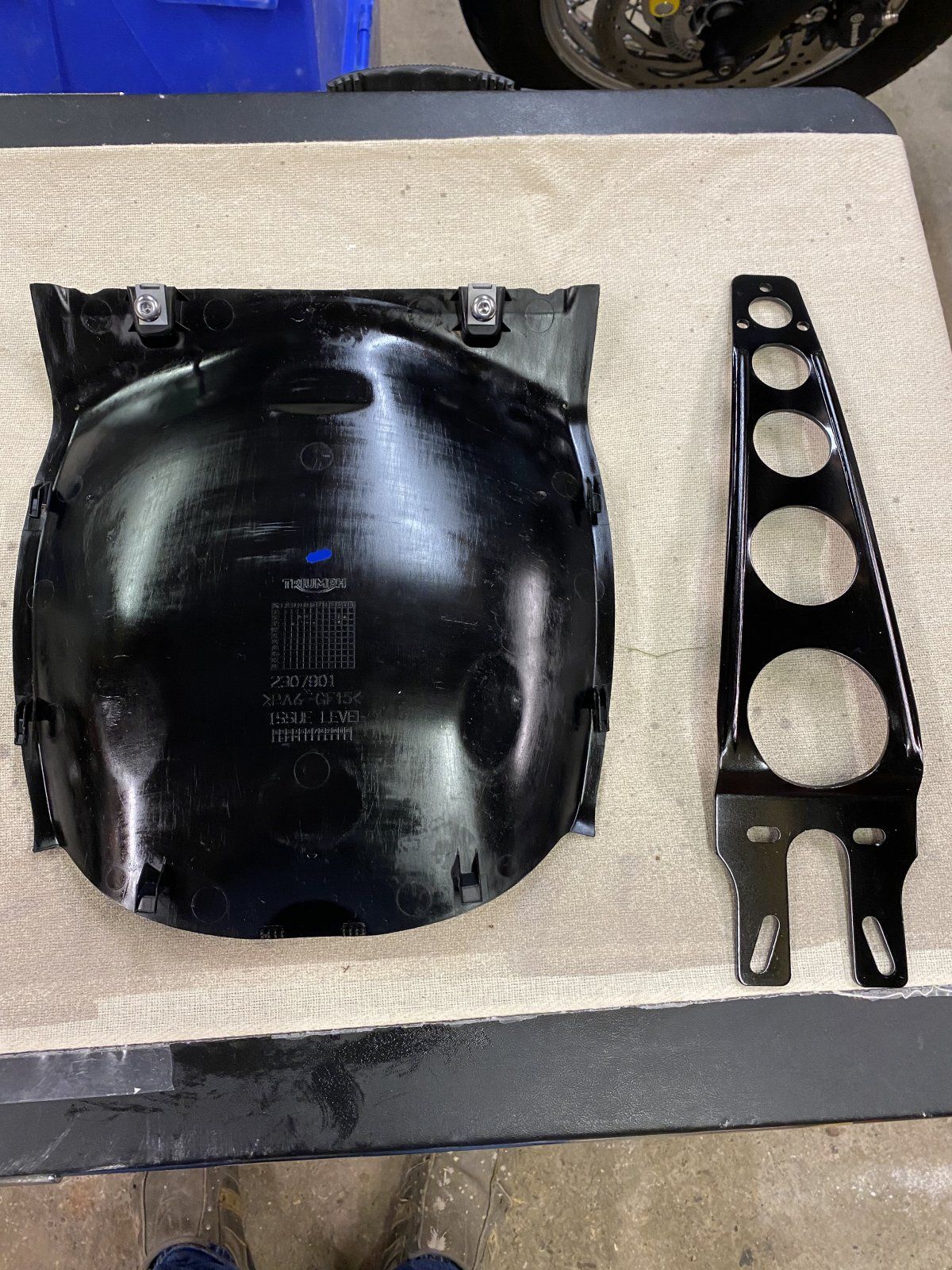 I removed the rear arm that holds the licence plate assembly, it's made up of quite a few parts, not quite what I envisaged. 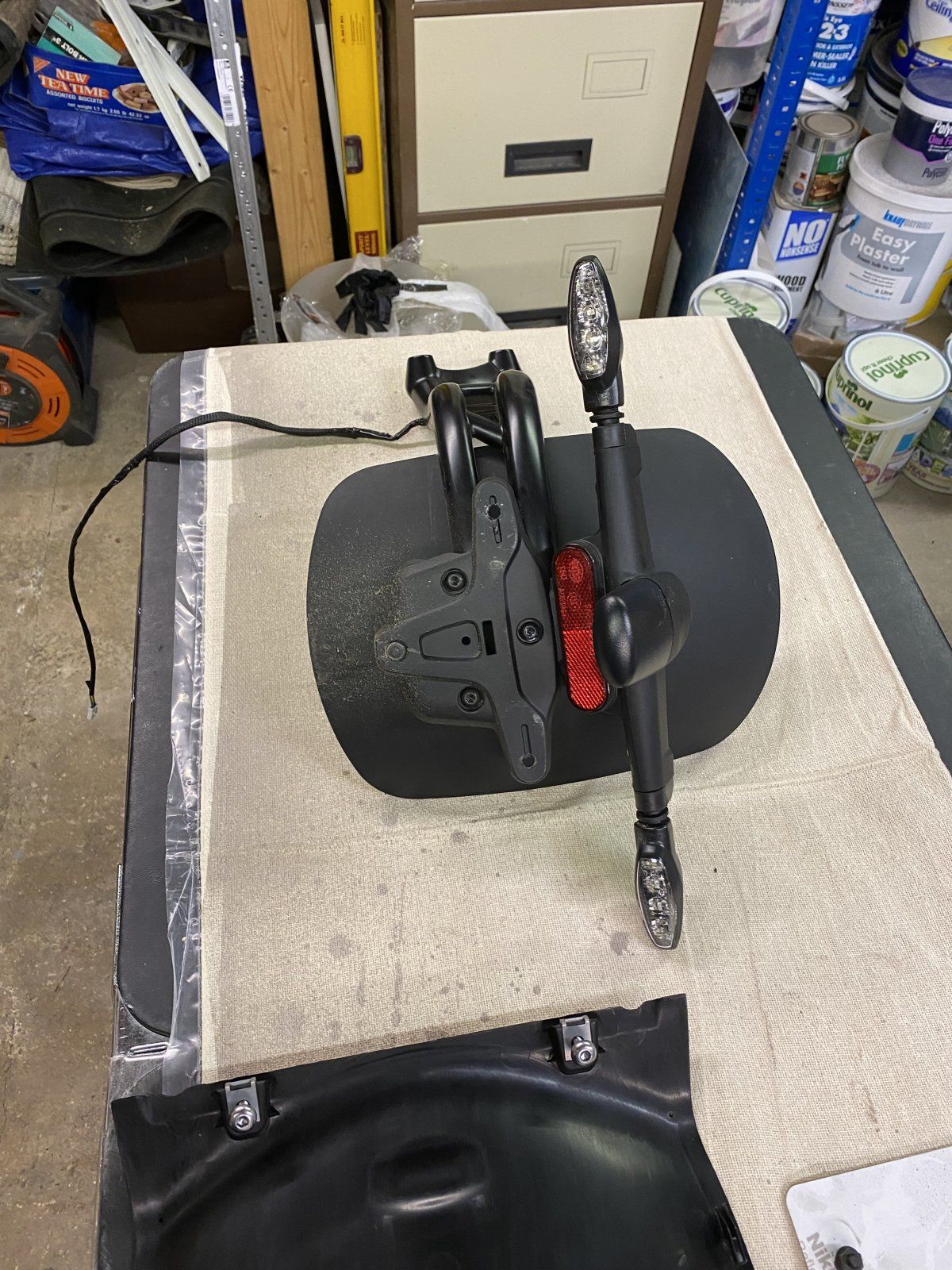 Once I removed the licence plate holder (3 torx screws) I could see how the unit was made up more easily. 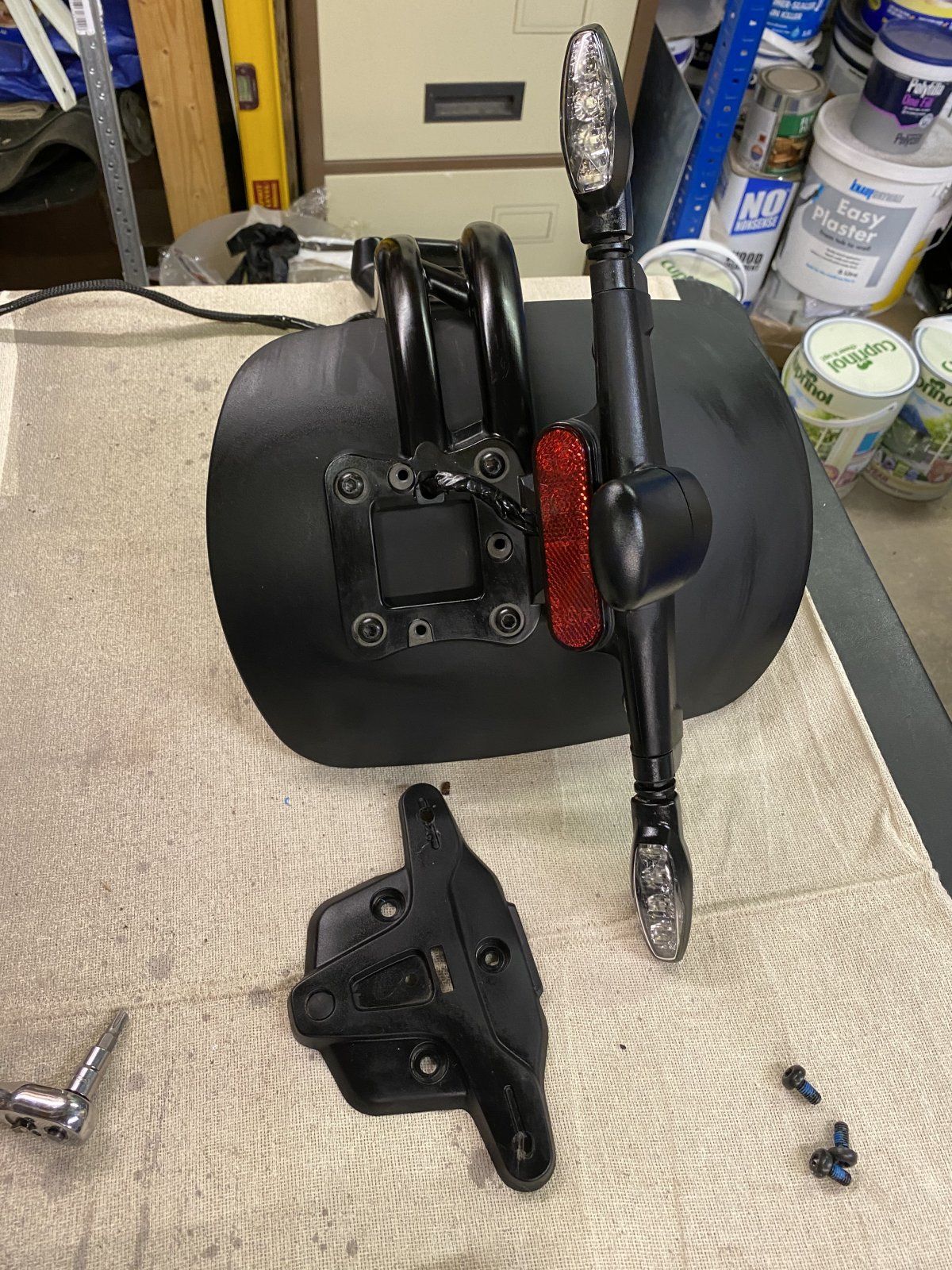 Then, I got carried away modeling options and bending the fender brace in to shape and forgot to take any more photos for a bit.

Essientially, the lighting assembly is held sitting on the arm on by 3 bolts, accessed from behind and underneath, once these were removed and 2 screws holding the back of the indicator housing also out, it was easy to see what had to be bent where and mounted at which angle. Hopefully you will see from the photos hereonin the bends I employed but I'll try to describe them as best as I can. 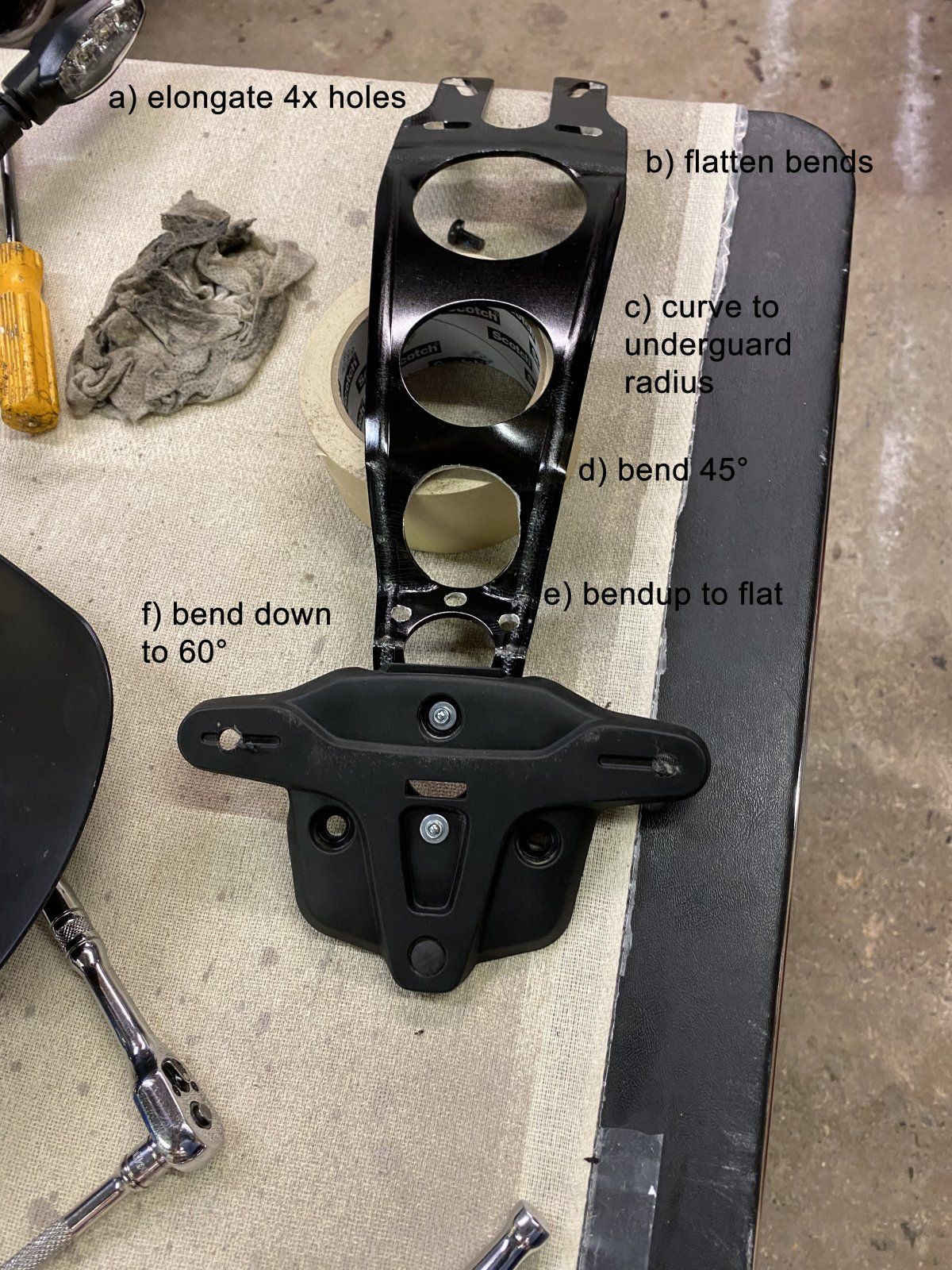 a) I made the 4 slots bigger to accomodate the 4 holes of the rear guard
b) I flattened the bends that were present.
c) I curved the brace to the underside of the underguard
d) I bent down just above the 3rd big circlular hole to about 45°
e) I then bent up to 'square to the ground' at the bottom of the same 3rd big circluar hole and drilled 3x 6.5mm holes to suit the lighting assembly mounting (there is a bracket inside with 3 captive threaded holes that can be used as a template)
f) the final bend is downwards to about 60° at the center of the 4th big circular hole on the brace.

I drilled a hole inbetween the 4th and 5th big circular hole and used a rivet to secure the licence plate bracket and drilled through the bracket at the bottom hole of the 3 holes at the end
of the fender brace and popped a rivet in there too, spacing out with a M6 nut behind.

Next I mounted the light assembly, you can see the braket witht he 3 threaded holes . 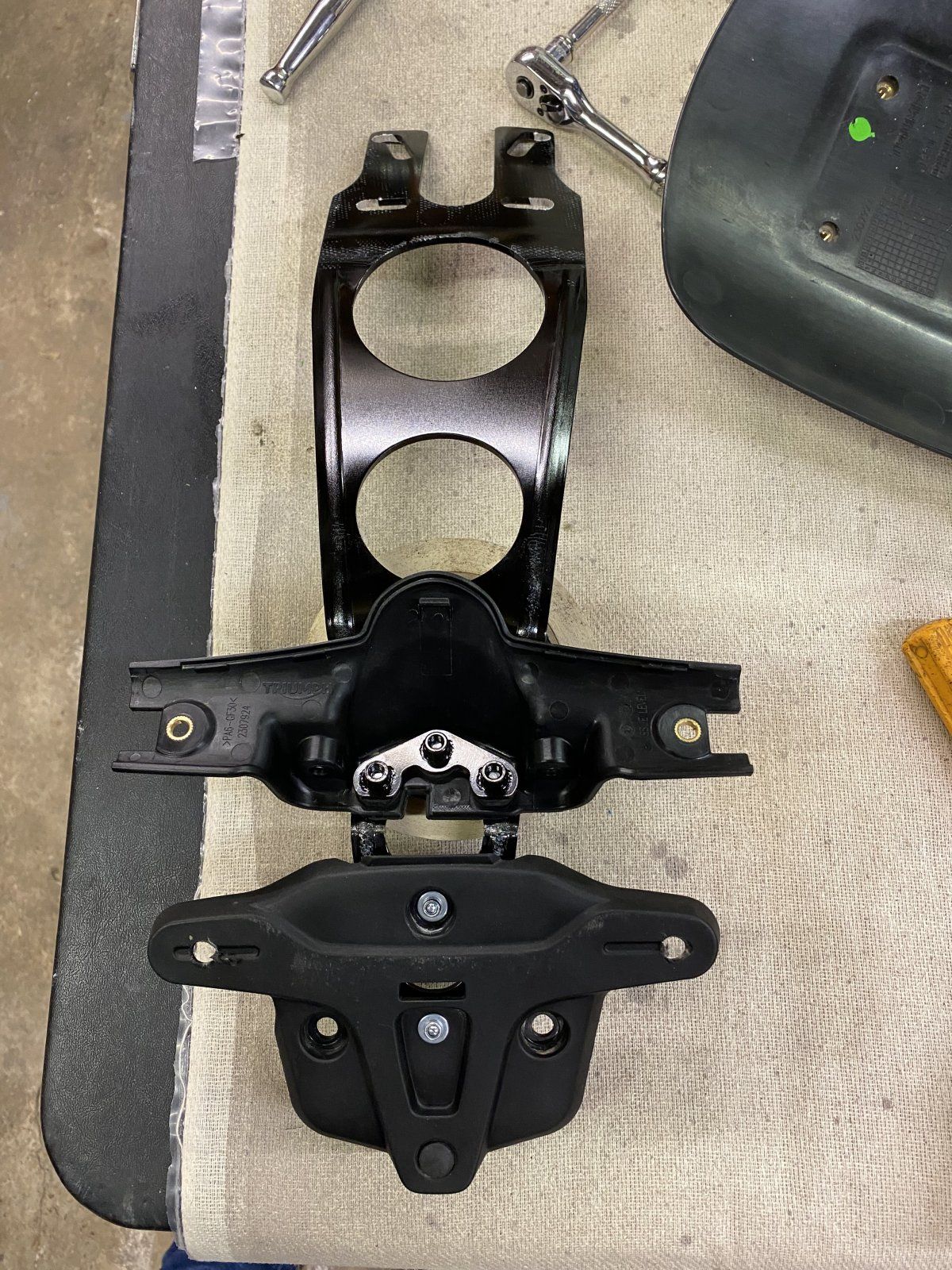 and then reassembled the lighting assembly... a shot form the backside... 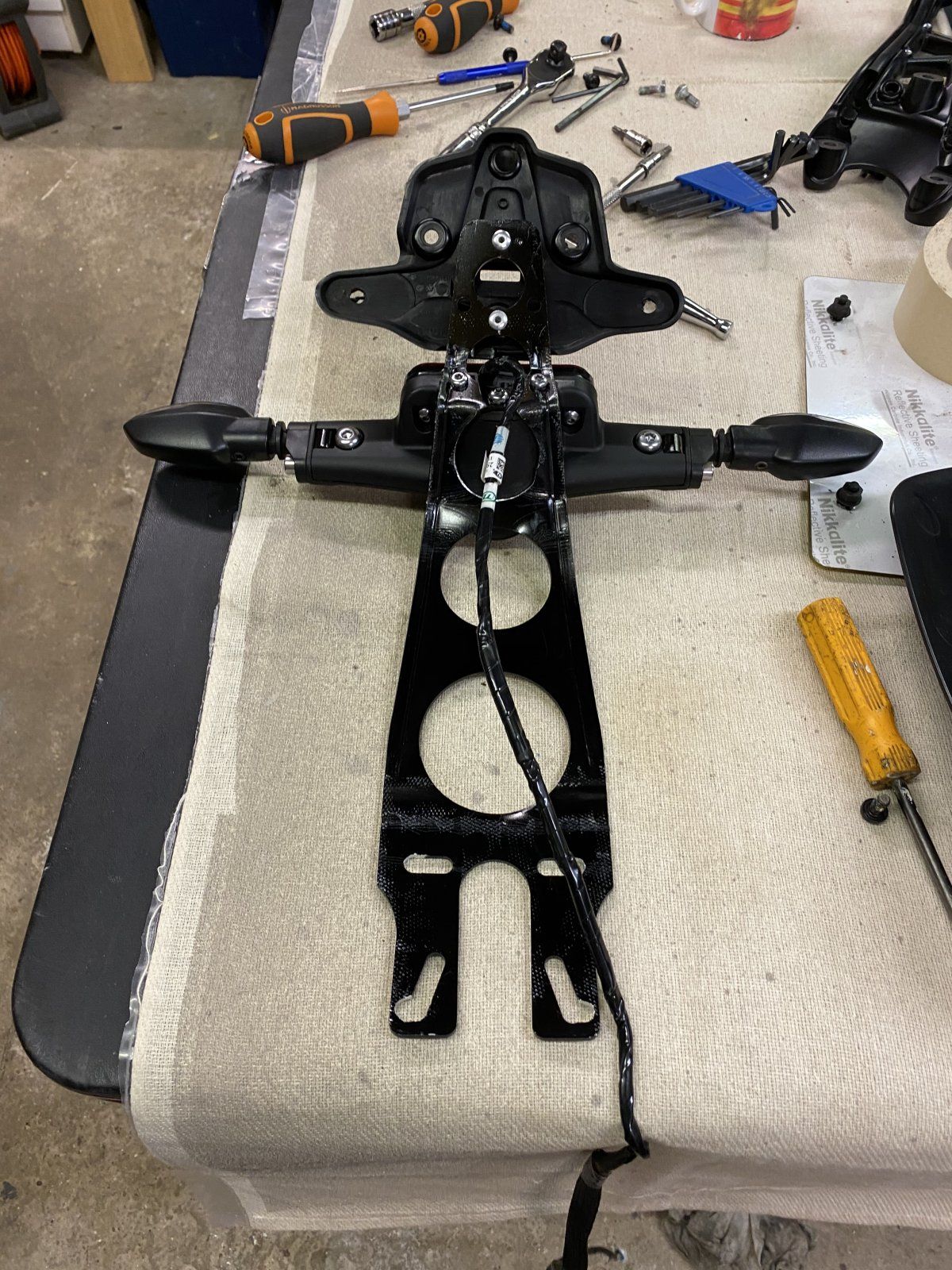 and one from the front 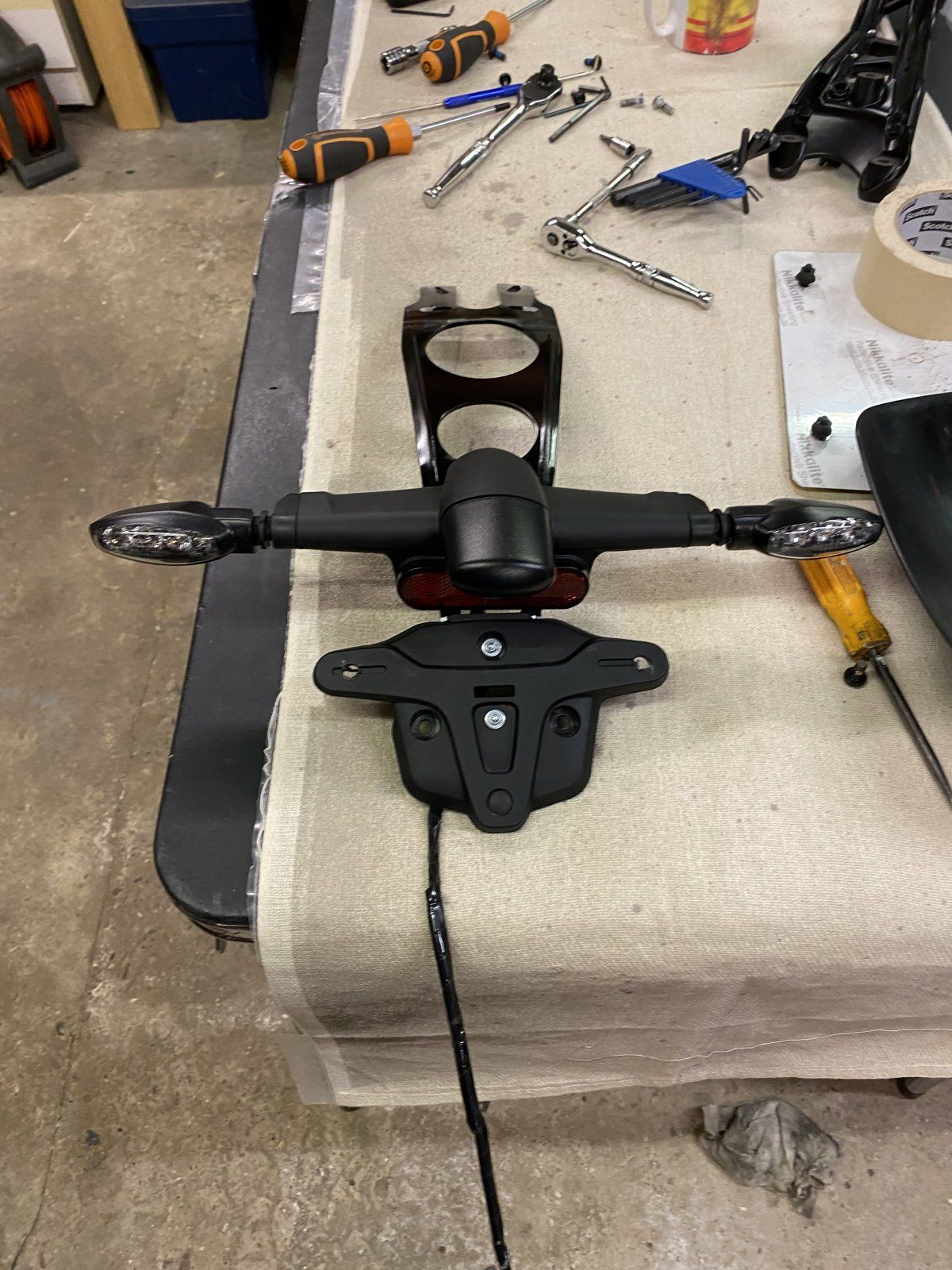 Next up I mounted through the elongated holes in the fender brace assembly using some (too) long M6 bolts and washers in to the 4 threaded holes of the rear guard... 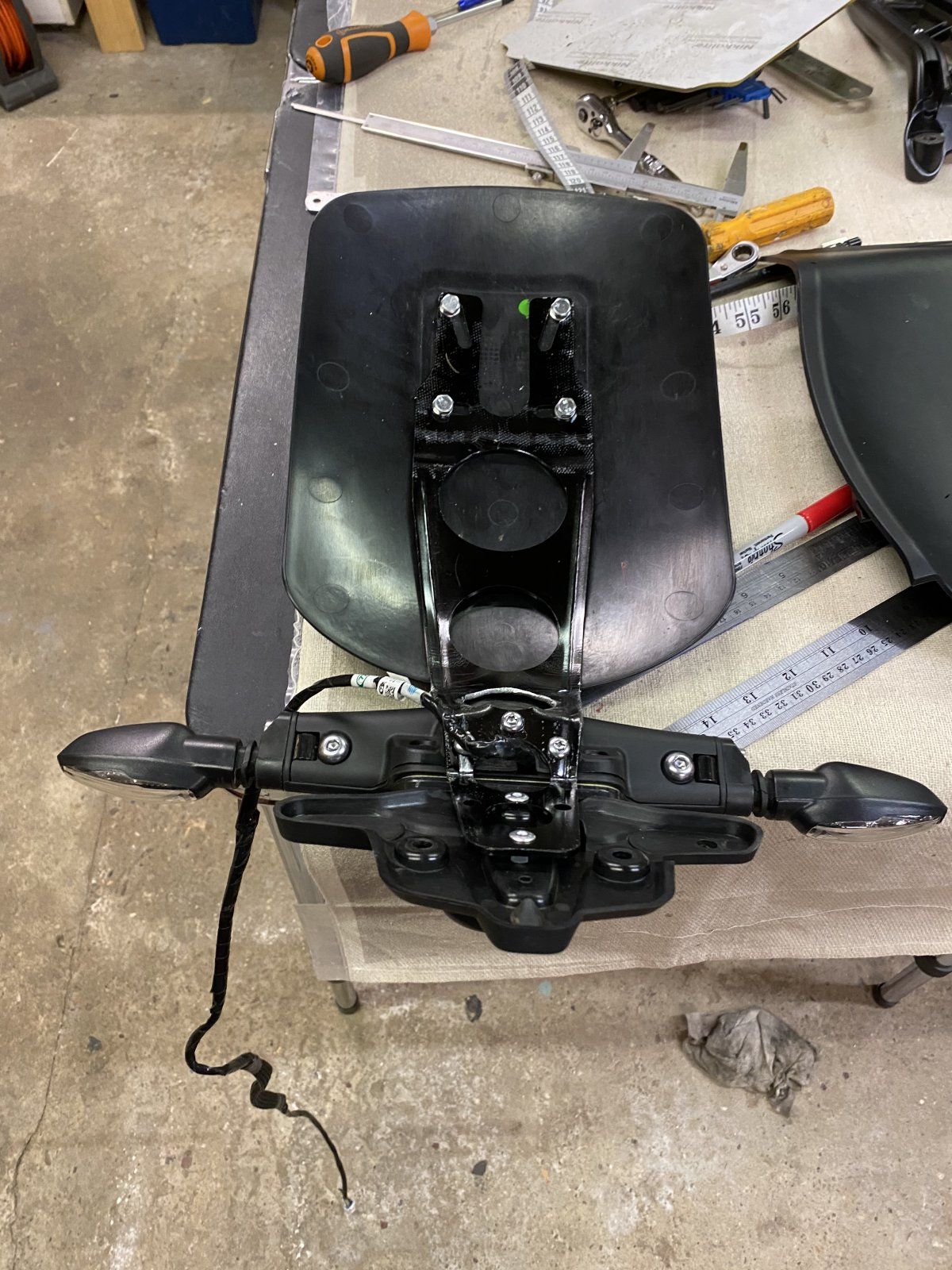 drilled matching holes in the underguard and mounted the assembly to it, popped some gripping nuts on the (too) long M6 bolts and cut them to length. (ignore the angle shown, it looks skewiff, but I can assure you it's straight) 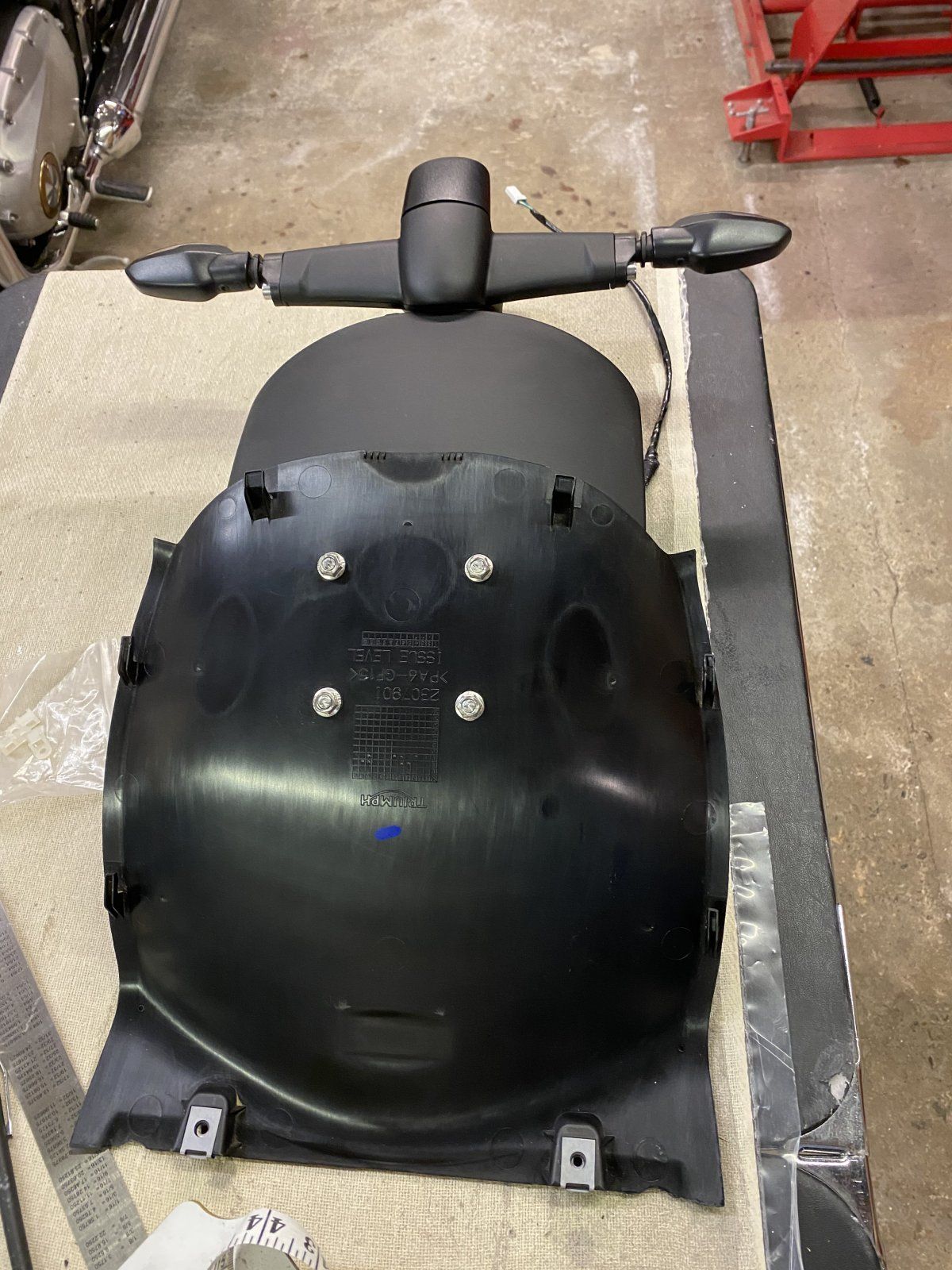 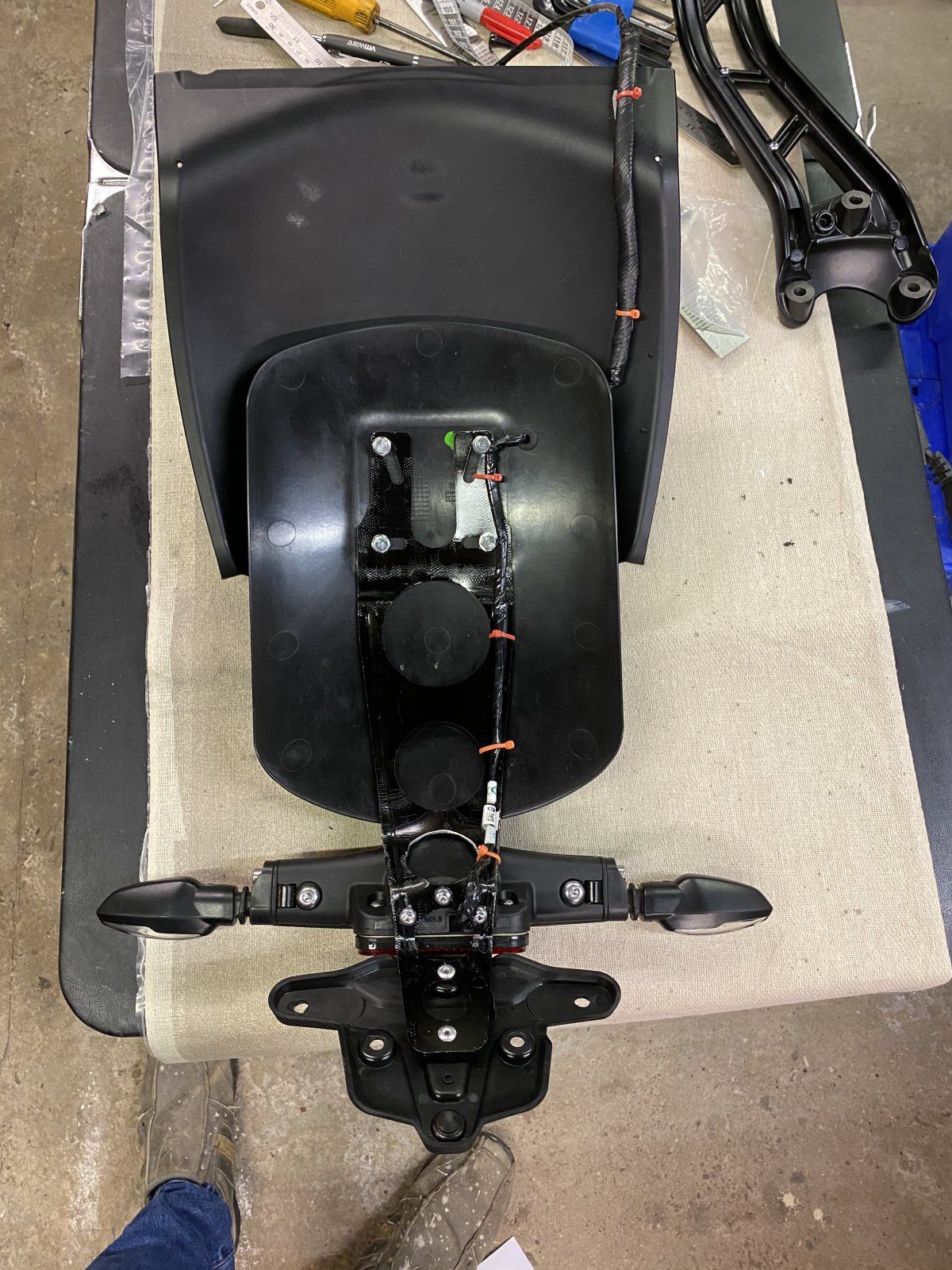 Fitted to the bike, a shot from underside with the PB hugger installed.... 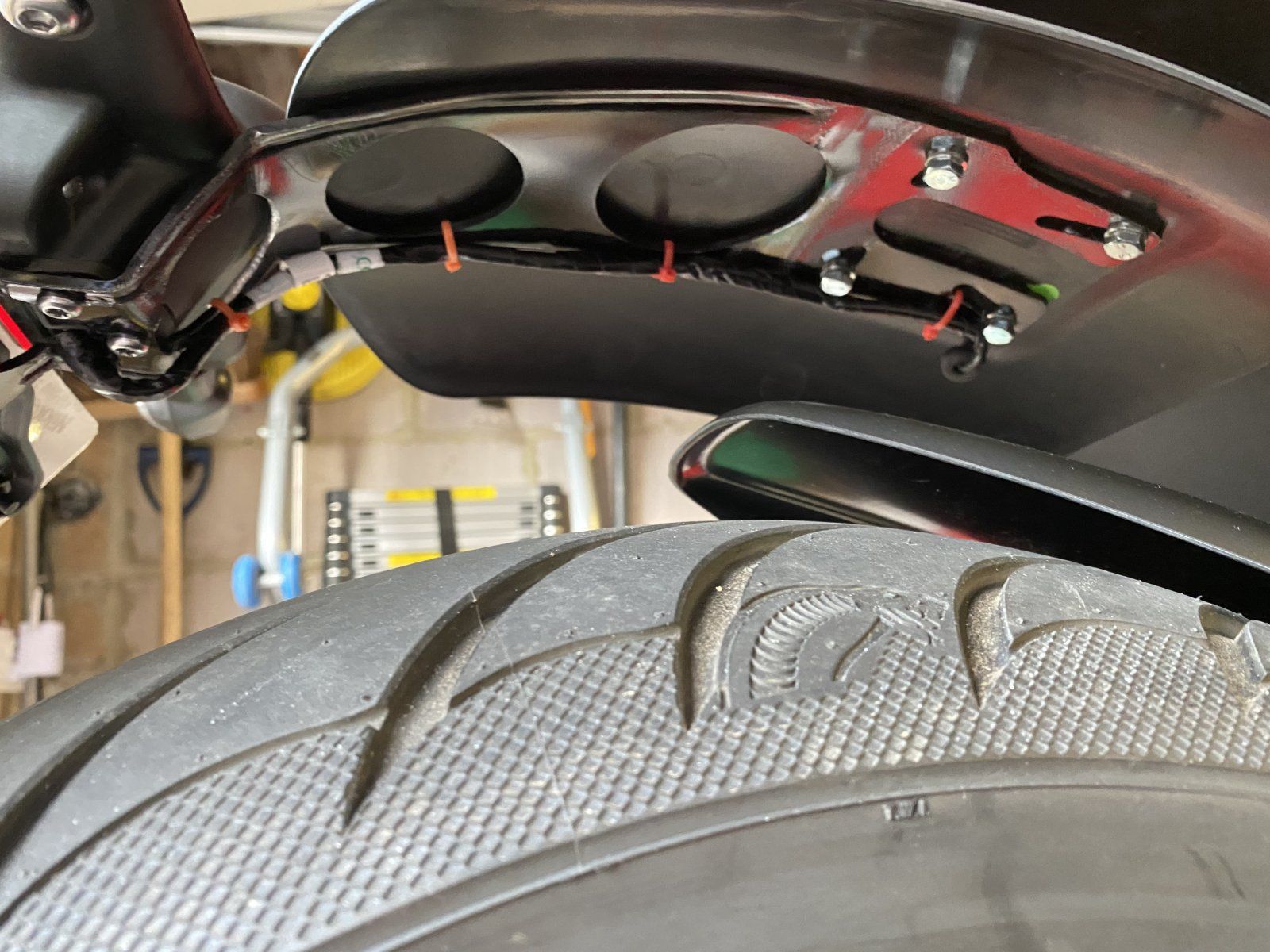 As a happy coincidence the rear of the licence plate light housing clips the assembly securely to the rear guard, so there is no downwards movement 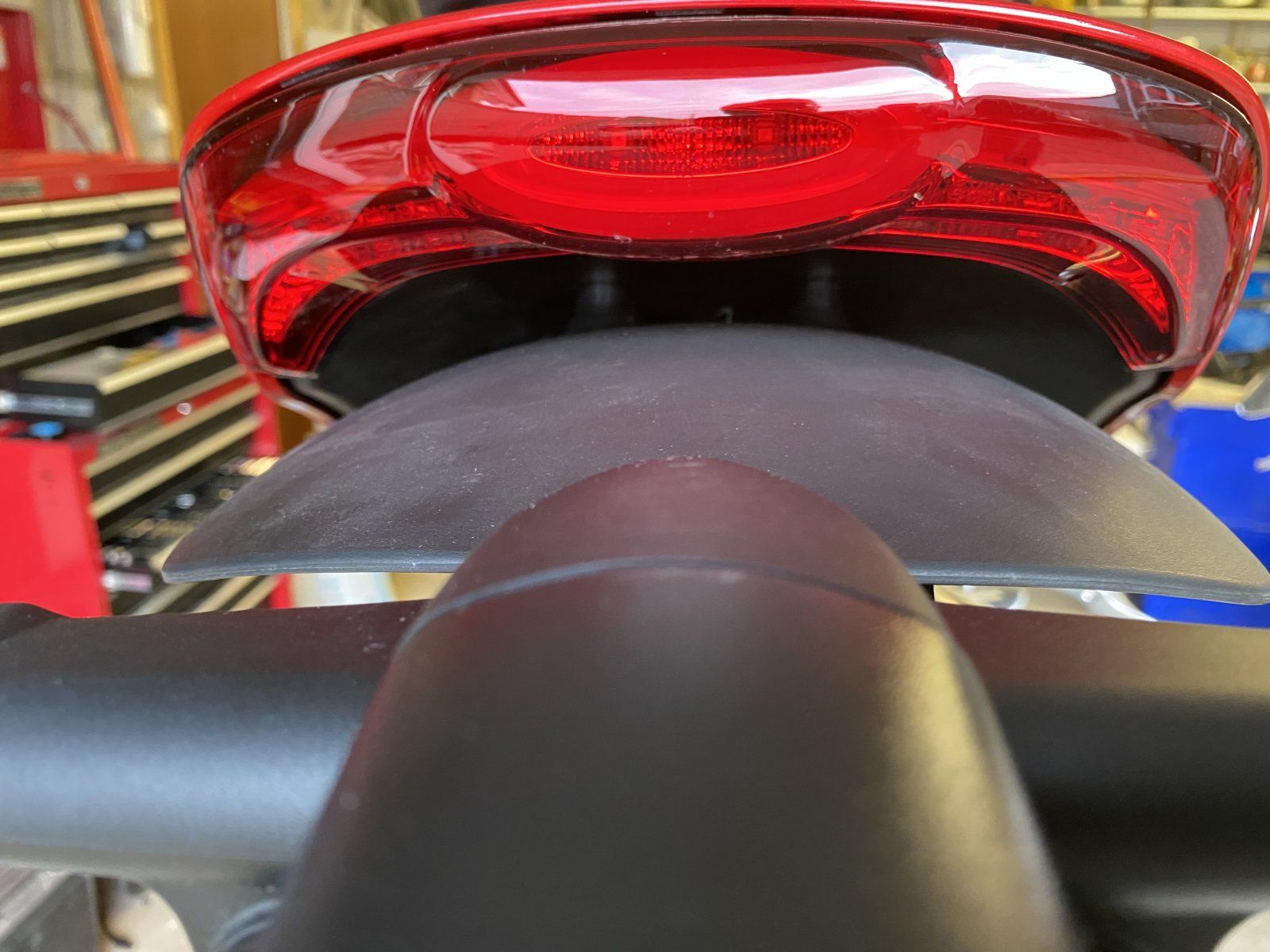 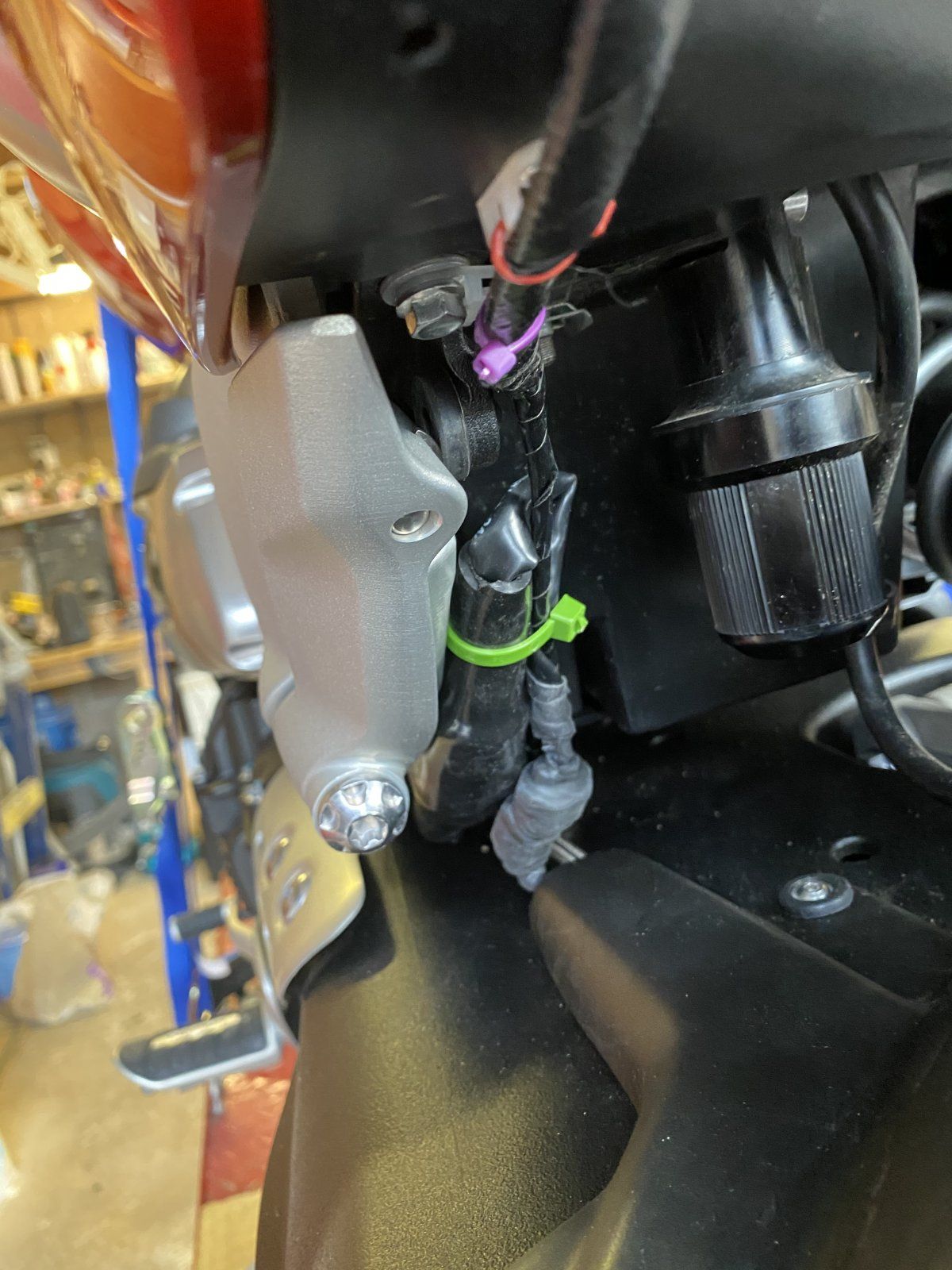 After a long few hours and lots of fun engineering for a £15 spend on the fender brace... this is the result: 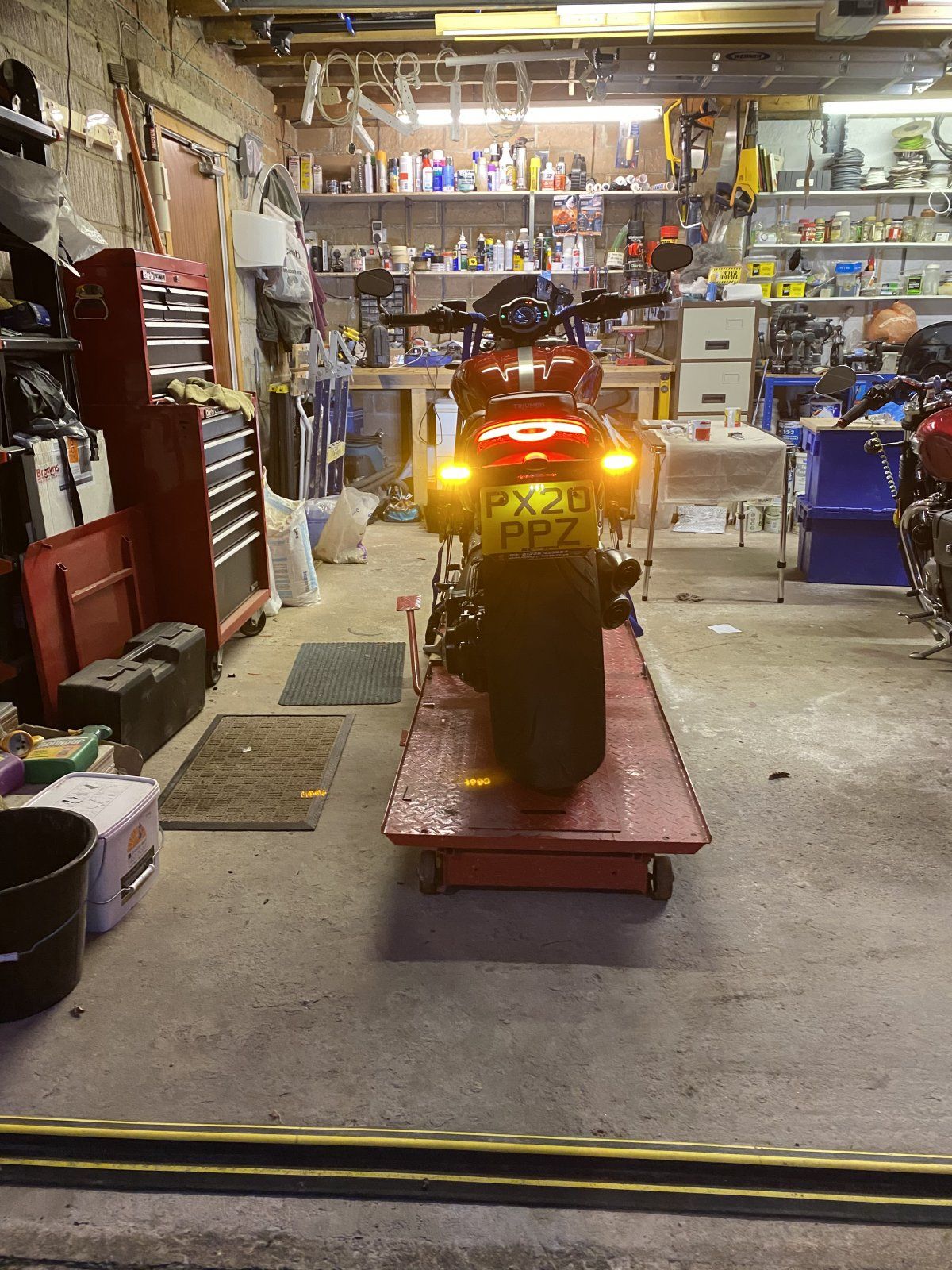 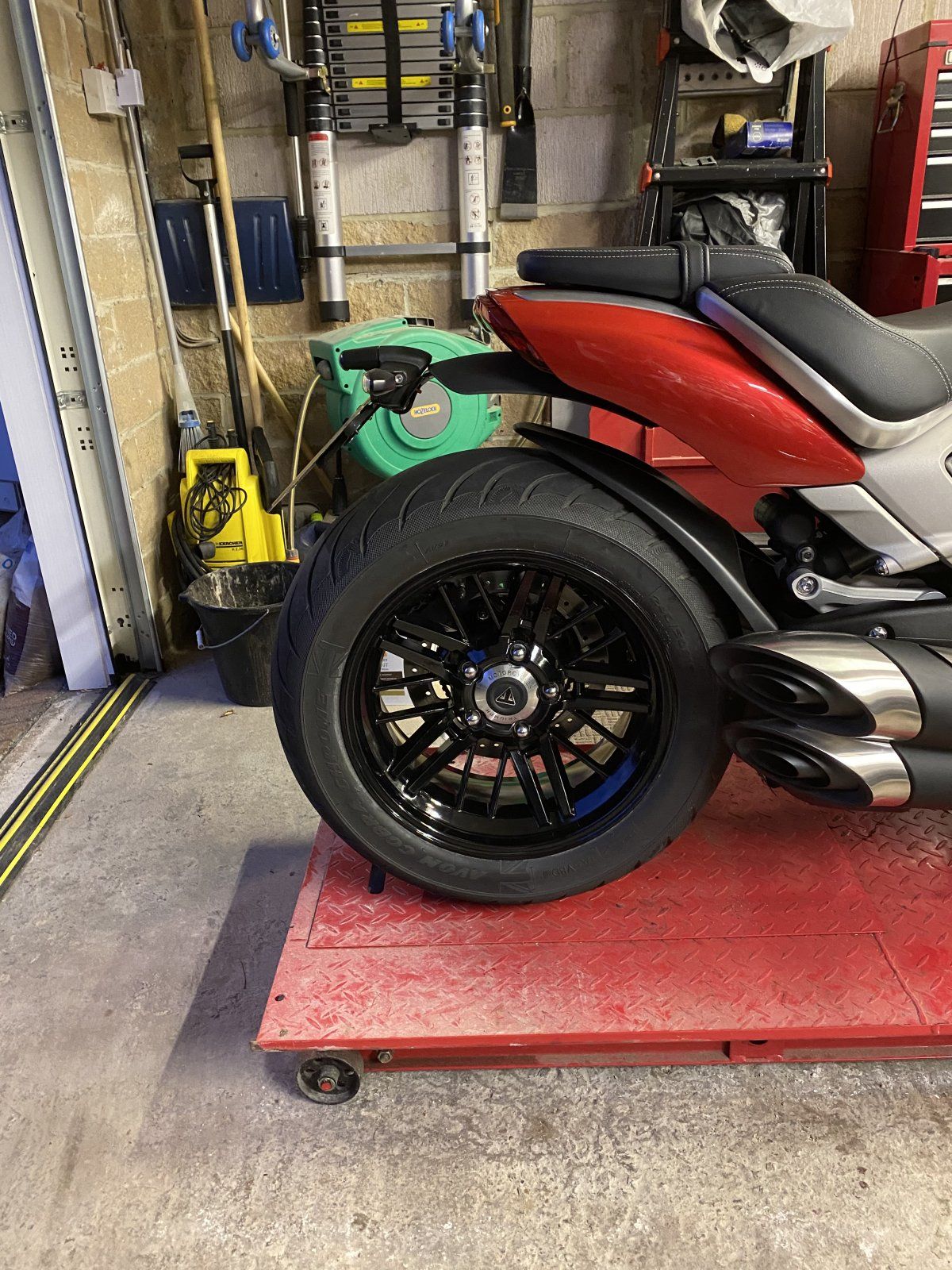 I'm hoping it will serve me well in keepimg my back dry on wet roads and the PB hugger will help to reduce the muck over the swing arm/underguard somewhat. 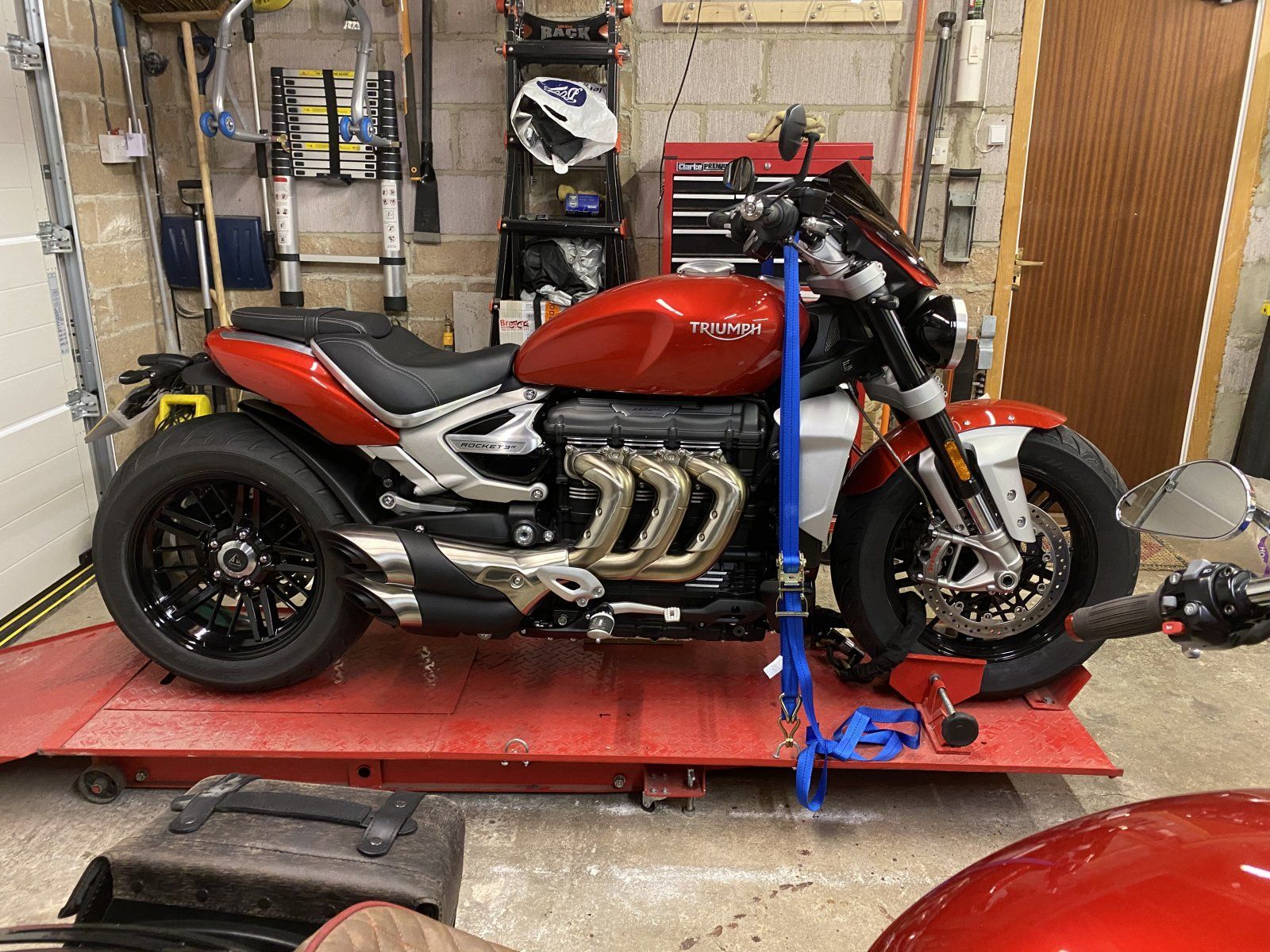 Brilliant job on the rear end!! Ought to stop tyre spray up your back.... number plate at a sensible angle that the cops will probably not bother about....that "satellite" bracket gone (good!).. shows off the wheel.... Great stuff!!

Dunno whether I'd be a tad worried about the 60* angle fatiguing and cracking with the rearward outboard weight on it??? Maybe a pair of small gussets inside the angle to brace it?? What do you reckon?

You say an MX bracket... Can you give more detail so I can get one and copy what you've done? Thanks....

ruzzle said:
Brilliant job on the rear end!! Ought to stop tyre spray up your back.... number plate at a sensible angle that the cops will probably not bother about....that "satellite" bracket gone (good!).. shows off the wheel.... Great stuff!!
Click to expand...

ruzzle said:
Dunno whether I'd be a tad worried about the 60* angle fatiguing and cracking with the rearward outboard weight on it??? Maybe a pair of small gussets inside the angle to brace it?? What do you reckon?
Click to expand...

Funnily I have the exact same concern and will add a couple of gussets one evening this week and report back. I need to get me some black cable ties and replace them so whilst the assembly is off, I will address along with over painting it

ruzzle said:
You say an MX bracket... Can you give more detail so I can get one and copy what you've done? Thanks....
Click to expand...

Brilliant! Exactly how i envisioned and hoped it would turn out!
Great step by step instructions too.

To admin: Hope you don't think i'm petty - but it would be nice to have a R3 2,5 mods forum on it's own IMO. I have never had any interest in the Rocket before this model, and have wondered twice where the posts went from first appearing in the 2,5 l forum (exhaust and this thread)
Just a thought, please ignore if you don't think its a good idea.
Cheers!

We find that most folks take their own bike for granted, and when looking at the site, are generally thinking about a specific interest. With that specific interest, one would sort through all the categories to find the one most fitting, and then within that, look for the applicable configuration. And in the case of the new generation bikes, most of the threads of interest are going to be later than the beginning of this calendar year.
Similar threads