the rocket is almost running again....sort of

Have had the bike off the road for a while replacing cam chain, cam guides, clutch, fuel pump and a few other bits. Noticed the battery was flattened down to 6v as bike has been unused for 2 months but it charged it up overnight and seems healthy still.

Finally got it back together and tried firing it up earlier. Primed the pump 3 times by cycling the ignition on and off then started cranking it. First few attempts it just gave an occasional bark and then nothing. Applied some throttle and it fired right up and held at around 4k revs but would die when the throttle was released. Some backfiring out the exhaust and intake intermittently. I topped off the oil and checked for leaks, all good. Fired it up again and ran it with the throttle held on a bit for a minute or two. As the engine started to warm up I was able to let the rpm drop to just below 3k but it still cuts out when throttle released. Trying to fire it up without throttle it starts straight away runs for about half a second then cuts out again. I called it a day as it was getting late and didnt want to disturb the neighbours too much. Brought the battery back in to charge it up for another attempt tomorrow.

Will clean the spark plugs and put some fresh fuel in, the stuff in the bike at the moment is 4 months old.
Will refit the bear claw, there is a ramair filter on, temperatures have been below freezing and even in the summer just removing the bearclaw on a cold engine would result in a few farts out the throttle bodies till it was warmed up. Thinking with the low temperatures and all the filter being exposed at the moment may be too lean for it to fire up properly. Will reload the tuneecu map that is currently in the bike as well, I have seen some strange things happen on my bike when the battery fails, like the odometer deciding that the bike has 111,000 miles on it instead of 20,000. I guess theres a chance something could have got corrupted. Can then run through the various tests and moniter the sensors etc better through tuneecu.

If that doesnt work then I can load in a tuneboy map and use it to drive the idle stepper motor to a set position to stop it from trying to manage the idle speed foe me.. Im wondering if the ecu is getting confused with me faffing around with the throttle on startup and the mixture being off and is allowing the butterflies to close completely.

If that still doesnt work then will go back inside the tank and refit the original fuel pump and test it like that, I had changed it to a walbro 342 so trying to eliminate all the variables one at a time since the bike was last running properly. Im wondering if I should have flushed the new pump through with fuel prior to installation as it was packed inside an oily bag, wondering if some of this could have clogged an injector. Step after that is to pull the cam cover and inspection hole on front of engine again to verify that all the timing marks are aligned properly. Im pretty confident they are as I used the cam alignment tool during installation and followed the workshop manual procedure, turned the engine over a few times etc and checked again. But its best to be thorough. Hopefully it will be running again properly before I have made it more than halfway through this list!

Old fuel. My lawnmower usually suffers from that. If I buy too much it goes stale and starting is hard. Makes you chuckle when you see movies where they come across fuel after a place has been abandoned due to zombies or Armageddon etc and it works fine, but that's Hollywood. Same as 1 fire sprinkler going off, they all go off, NOT.
Hope you get your ride sorted.

So today i sucked out as much fuel as I could and put a gallon of fresh fuel in. Refitted the bearclaw, reloaded the tune that was in the bike and tried again.
This time I was able to get the bike to run steady at 2k rpm with some throttle applied, I held it there for 5 minutes or so to get the bike warmed up. There was much less backfiring out the exhaust and intake this time. Towards the end of the 5 minutes it was hunting slightly and I could hear the ticking sound of a misfire creeping in. I pulled the plugs and they were all very dry sooty black so cleaned them up and popped them back in, I checked the coil terminals as well but they were still nice and secure.
Tried to fire it up again but still no improvement. It will start without throttle, run for half a second and cut out. Or start with some throttle applied and can be kept running so long as the rpm is over 2k. Disconnecting the ISCV connecter made no difference.
I need to charge the battery again as was having issues getting tuneecu to connect so I could check out the diagnostic pages. Its really fussy and will only connect reliably on a fully charged battery.
I also removed the vacuum gauge plumbing and put the cap back on the vacuum port on the centre throttle body. Im wondering if having a few feet of extra vacuum hose off one throttle body to the gauge is confusing the sensors on the bike as the other two throttle bodies just had the rubber caps in place and nothing connected to them.
Round three begins tomorrow............ Will put another gallon of fresh fuel in as well.

What MAP you getting on each of your throttles?

Cool will try and get some readings tomorrow. Just to clarify the oem vacuum lines and map sensor are still in their original configuration, I had just added the gauge on to the spare vacuum port on the centre throttle body, the other two throttle bodies still had their spare vacuum ports capped off. I have removed the gauge and the 3 feet or so of associated hose and put the original cap back on the port. I can test it like this tomorrow when the battery is charged again.

Would changing the fuel pump be likely to have made a difference? I was under the impression that the extra output from the walbro 342 wouldnt matter as the fuel pressure regulator would maintain the original pressure and return any excess fuel back to the tank.

Thanks for the input

ratsidecar said:
Would changing the fuel pump be likely to have made a difference?
Click to expand...

I can't say as i've not changed the pump out on it's own, I did it with a whole host of changes.
But pressure is not to be confused with flow.

From my characterisation of the fuel pump assemblies (stock setup vs Walbro GSS342 + Mahle KL 60) i found that the stock setup delivers 3.4LPM @ 3 Bar, whereas the Walbro delivered 3.5LPM at 3 Bar - so yes apparently slightly more fuel at the same pressure.
This may richen your AFR slightly. Unless you adjusted the map to allow for it, or you mightn't notice a difference anyway 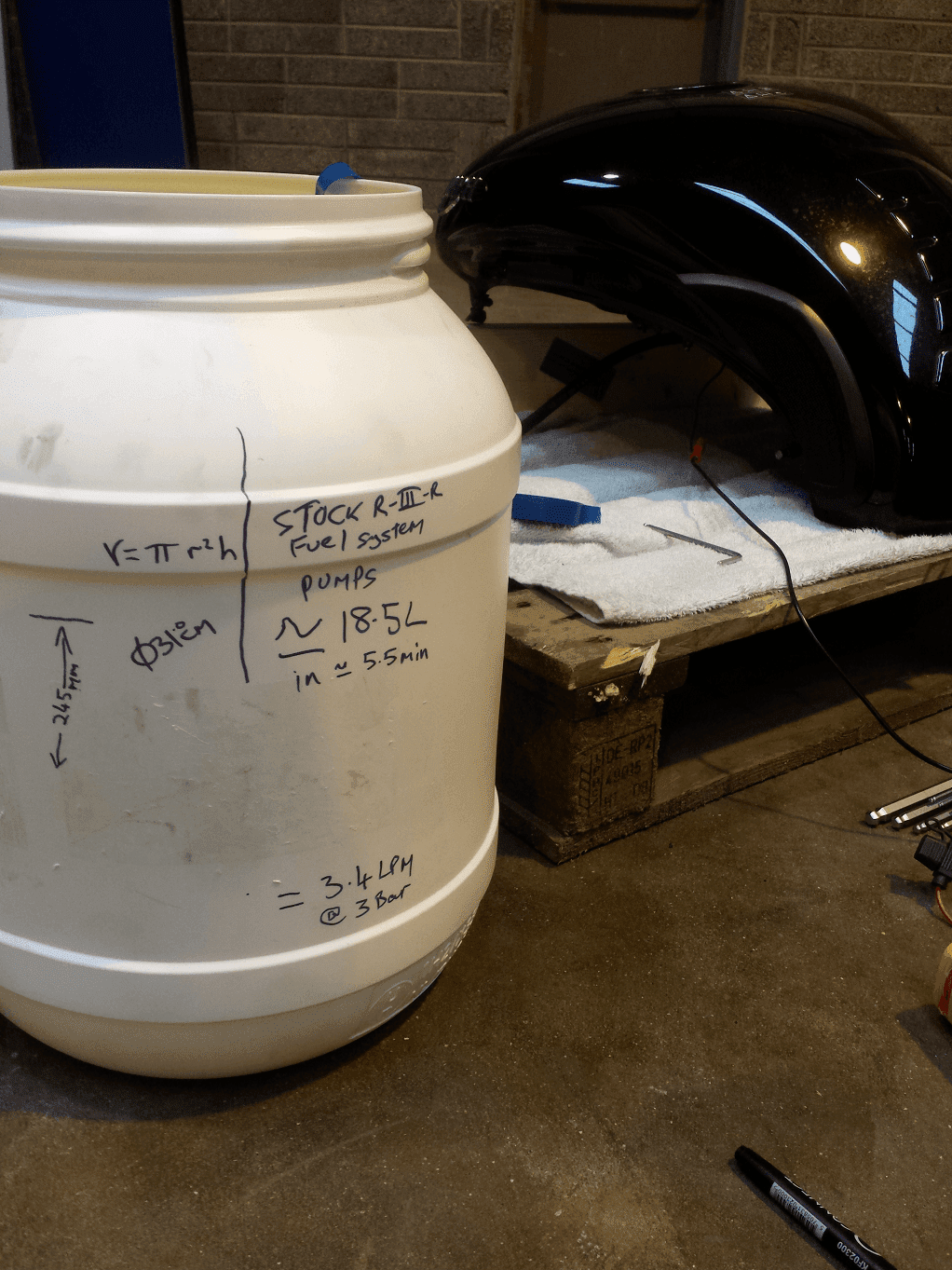 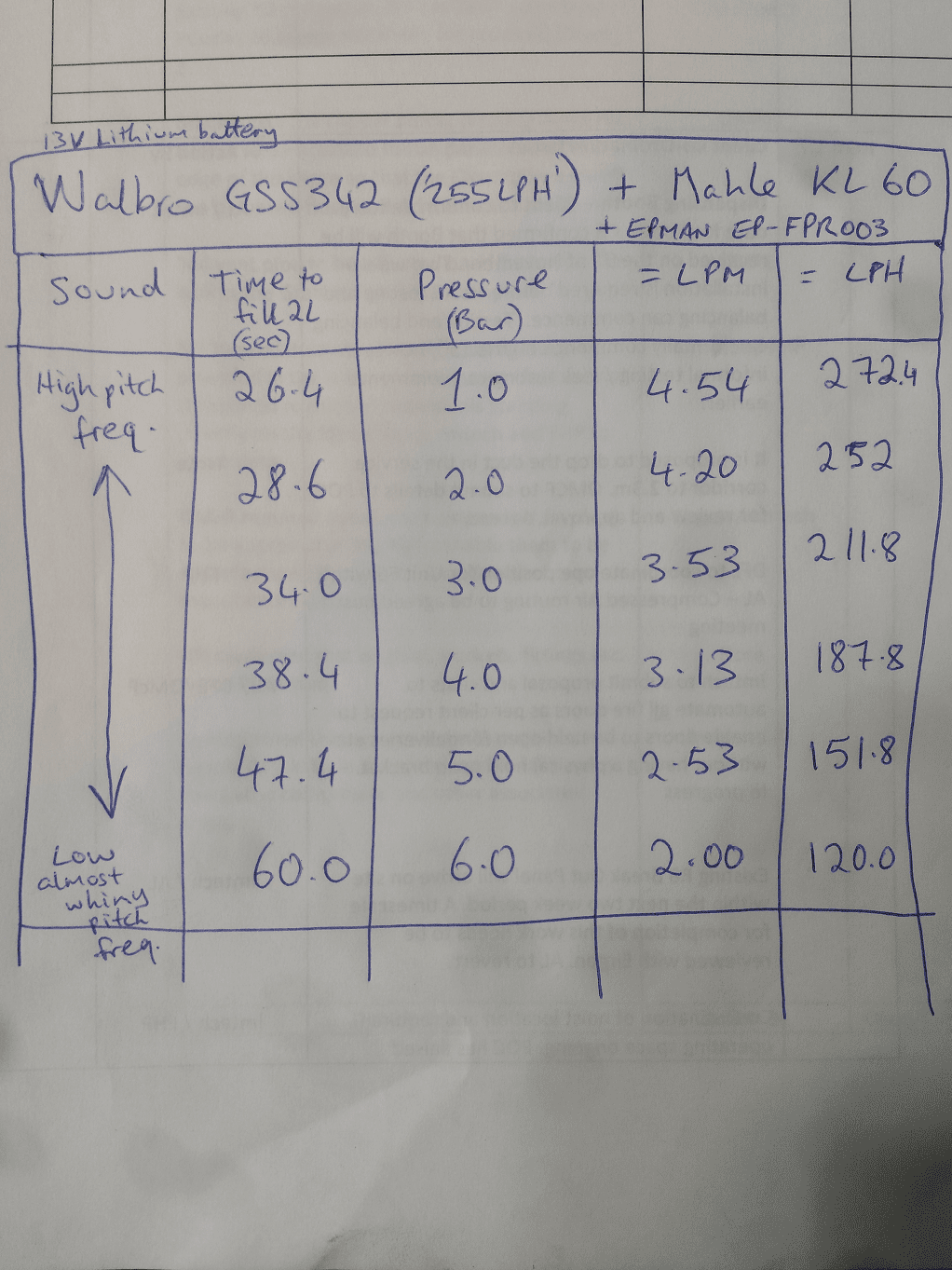 How sure are you that your cam timing is correct - it really sounds like the cam timing is out given the symptoms you are describing - might be worth a second look just to confirm.

Im pretty sure the cam timing is correct as I took my time aligning all the marks properly and checked it multiple times. If I dont have any joy with what R-III-R turbo mentioned tomorrow I will have another look at it. I know for certain that the cams are in the correct position relative to each other as the triumph tool was used to lock them in position. The bottom timing mark I used was a dot on the end of what looks to be one of the crank webbs viewed through a window with a line on it. I was looking for a mark on the bottom timing gear as per the workshop manual but mine didn't have one. Figured they had changed things up over the years.

Hmm........ doing a bit of searching and rereading of old threads on here, seems there should be two marks visible, an upper and a lower when looking through the inspection hole on the front cover. I only saw one of these marks when I was lining things up, I could have been viewing it from the wrong angle. The front wheel is still in the bike and it was hard to get a look at things straight on and from the same height. If I was working from only one of those marks its increasingly likely that I could be a tooth out.

First I will eliminate the other things on the list, just to be sure.
Last edited: Feb 3, 2019

It really does sound like cam timing - but as you say check out the other bits first then go back and check it again I really wouldn't be surprised if that is your root problem.

Good luck with it - you will get it sorted.

I don't believe your fuel pump is causing the problem - you could swap the old one back and try it. Just to let you know the slightly more flow from the new pump/filter will not make it rich - more pressure will - not more flow. Check out the injector flow calculators online to confirm.
Last edited: Feb 4, 2019

John Miller said:
It really does sound like cam timing - but as you say check out the other bits first then go back and check it again I really wouldn't be surprised if that is your root problem.

Good luck with it - you will get it sorted.

I don't believe your fuel pump is causing the problem - you could swap the old one back and try it. Just to let you know the slightly more flow from the new pump/filter will not make it rich - more pressure will - not more flow. Check out the injector flow calculators online to confirm.
Click to expand...