A recent post piqued my interest regarding what just installing 1" longer shocks would do to the frame geometry of a R3R. Initially my feeling was the change would be very small and not too significant when compared to the common tire changes many of us have made.

The first and last columns of the chart are the most interesting.
Hope you find it interesting . . . 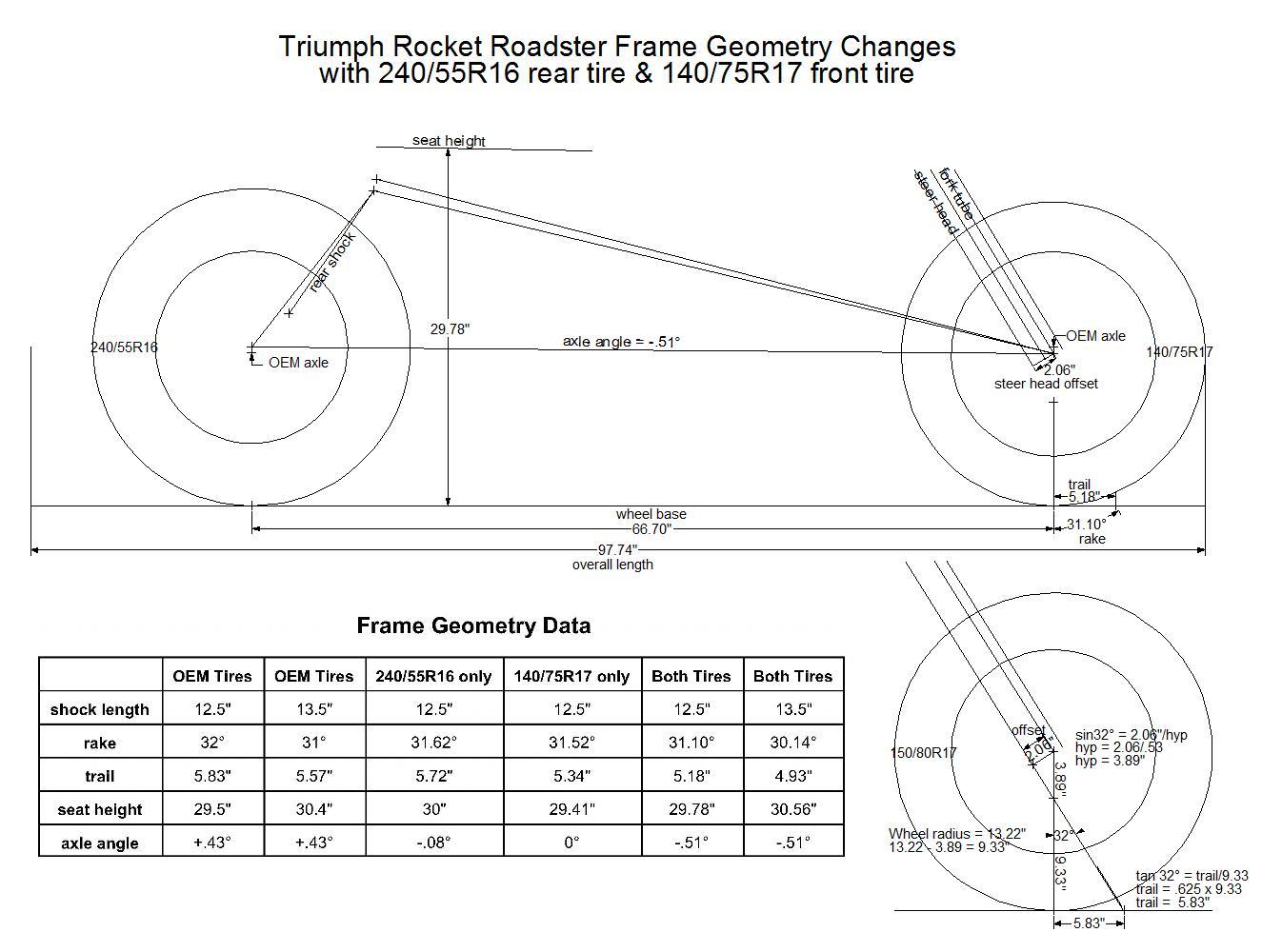 Interesting Steve. I measured some of the dimensions at home, so I’m sure there’s some margin for error, but, coupled with tolerances and different sag heights I think are probably pretty accurate in the thread below. Measured numbers below, these we’re measured at static sag, so bike resting on suspension straight up and down.

The final geometry is much more aggressive and the measurements are consistent with the change in how flickable the bike is.

Most interesting -- and what about Touring ?

@Claviger Rob,
Gratitude for your input, Amigo!
Curious where you got those dims?
At this point & just to be clear, I am talking OEM dims here and hope you are also?

I did not have the rear axle to swing pivot dim. Where did you get that?
Using your dims, with your rake of 28.3° and offset of 2", I'm getting a trail of 6.86".
Here is the trig for calc of the trail on an OEM Roadster:

Those are the actual numbers I measured on my bike in the garage. The 2" offset I'll have to re-check. I am a bit suspicious of that number myself. EDIT: Assuming offset I'm getting right, being center of steering stem plane to center of axle plane as they run diagonally through the top of the stem and fork, then I re-measured a 2 inch offset.

Rear axle to swingarm I took just the other day, just measured center of pivot to center of axle, used a level running through midpoint of the swing arm pivot and a 90 angle to measure the distance between that plane and the vertical line through the rear axle. Some trig later, 13.2 degrees is the swing angle, a little steep, but, generally fantastic for a sporting feeling and is actually consistent with the behavior I've noticed. Shallow angles push wide on power a lot, steeper grip and go without excessive widening of the steering radius, or slip spin and drift smoothly. Mufasa does the later, either drives beautifully out of turns or slips and spins predictably.

As soon as the forks go back on later this week (I hope), I'll carefully double check all the dimensions again, to make sure.

Remember, as the shocks get longer, wheel base gets shorter and swingarm angle gets steeper. It's a combined effect I think of both more preload and more length on the back that causes such a drastic change in measured geometry.

When I say my bike is "flickable" it's an understatement, its downright ****ing agile. If you follow me around while were puttering about slowly, you'll see me oversteer turns a lot and have to correct wider, the bike just falls into turns, just like my Daytona does. In that thread I warned against people following my route of changes, 1" taller + high spring rates + the tire size changes really puts the bike into what some would call "scary" territory.

In fact, when we were out with Mike you may have noticed it, I distinctly remember having to correct wider a number of times.

At some point I'll have to toss you the keys so you can go evaluate for yourself
Last edited: Apr 9, 2018
C

Really want my Forks back now just to redo measurements and make sure they're right.
Last edited: Apr 9, 2018

As a basis for comparison:

So you can see that a little adjustment puts the R3 right in the ballpark of bikes praised for their “superior agility” and cornering prowess.
Last edited: Apr 9, 2018

@Claviger Rob,
Please go back to post #4 - I have shown the trig calcs necessary to determine trail for the OEM Roadster.
BTW - The proper steer head offset is 2.06".

And the two values yet to find are the center of gravity location with the rider aboard and the gross weight. Then acceleration values can be used to calculate load transfer and anti-squat. And then you need to know the exact tire profiles so that you can calculate contact patch line deviation from theoretical centerline at various lean angles. Knowing all this you might begin to understand steering dynamics. Oh, and you need to know tire slip angles as well.

Actually, these dynamics are transient so any calculation is only an approximation at a given moment in time. Suspensions compress, center of gravity moves, trail changes, and anti-squat geometry varies with rear suspension travel. All these values change constantly as the bike is ridden around a curve. No given set of calculations tells the whole story of how the bike performs or how it feels. But, you will understand the system better for having performed the calculations.

One more point to ponder: Can a unicycle rider traverse a curve? How?
Similar threads