I just completed my latest revision of my Key-Less system - this one is now completely Solid-State with NO RELAYS and all in a single water-resistant enclosure.
I've been working on this revision for about 6 months now - I have 7 prototype versions out in the field, 5 of them on Rockets of various generations - 2 x Std/Classic models, 1 x 'early' Roadster and 2 x late model Roadster; also have one on a Street Triple and on my own Daytona/Speed Triple 955.
My great appreciation for those who participated in the Beta tests - they were not without a few bumps, with some early teething problems. But I ultimately got the bugs worked out and they are all working as intended right now.
(I won't publish the names of the testers myself, but they are welcome to chip in their comments as they wish, if they choose to make themselves known )
After solving the final piece of the puzzle, all of the units came back so I could mod them to the latest circuit design. I'm pleased to say all are working consistently at the latest specification.

But again - could not have done this without their help, so - you know who you are - THANK YOU!!!!

The features of this new one are:
1. Still Hands-free control - keep remote in pocket, nothing to press.
2. All Solid State design with Integrated Power and Control on a new PCB.
3. All now in a single enclosure, which is water resistant (essentially box is sealed)
4. Easy Installation - Two plug n play connectors and one Posi-Tap connection.

This is my new Control & Power Board:

The three large chips are the MOSFET Power Switches.
These are good for an amazing 32A EACH continuous with surge capacity to 135A - fully protected against short circuit. Note that the max current each circuit will actually see is ~ 10A continuous (on the early Std/Classic that is switching full headlight current).
These devices have incredibly low 'on resistance' and that means they dissipate incredibly low power even at high current operation. (I have tested at 15A continuous for over an hour and there was no discernible increase in temperature directly on the device)
Of course on the R3, even tge std/classic, they are running at a fraction of their spec'd capability.

The control circuit is the same design as that I have used in the previous generations utilizing Relays or the PDM60 - the output just drives the new Power Switches instead of those earlier devices. So that design is very well proven. The only difference is the physical layout on the printed circuit board is different, but the circuitry remains identical.

This is the finished revision of the board incorporating the mods that were worked out during the Beta Test phase. (So the final version got new artwork to incorporate the last set of changes). The upper half of the board (per the view sbown) is the control while the lower half in the foreground is the power switching stage. 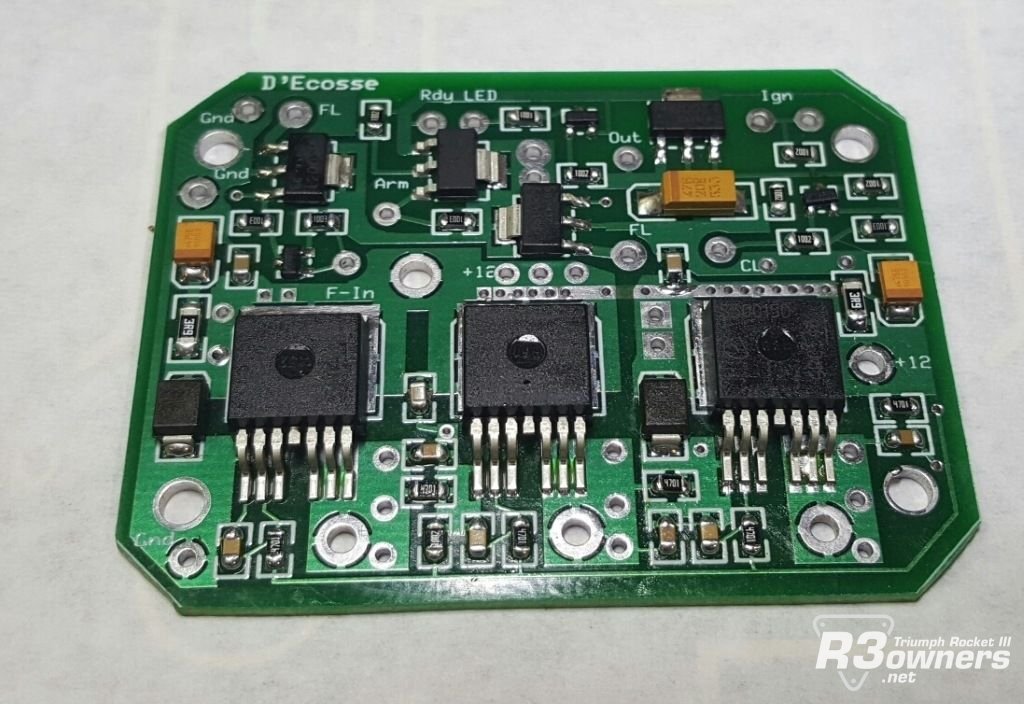 And here it is installed in the box, along with the RFID Receiver (I purchase a commercial RFID receiver, which is more cost effective) 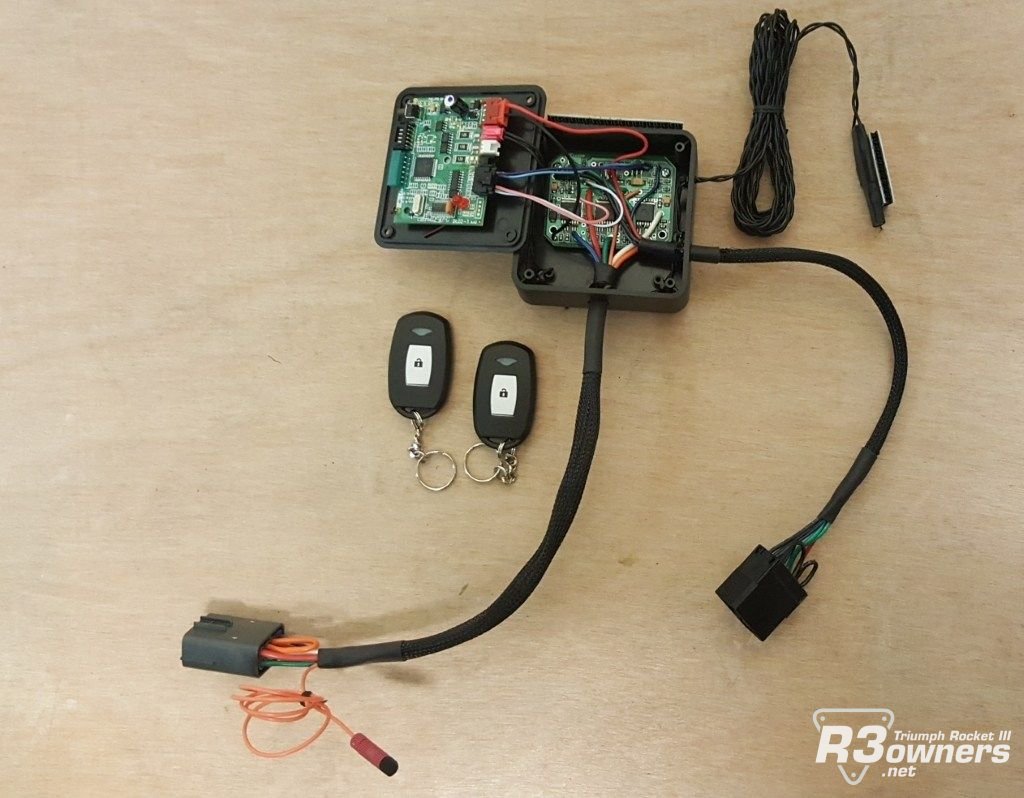 And the finished kit:
This one shows the 08+ Key-Switch connector; the system is identical for the 'early' Std/Classic models, just with a different connector.
Touring is also essentially the same with one subtle resistor addition specifically for those 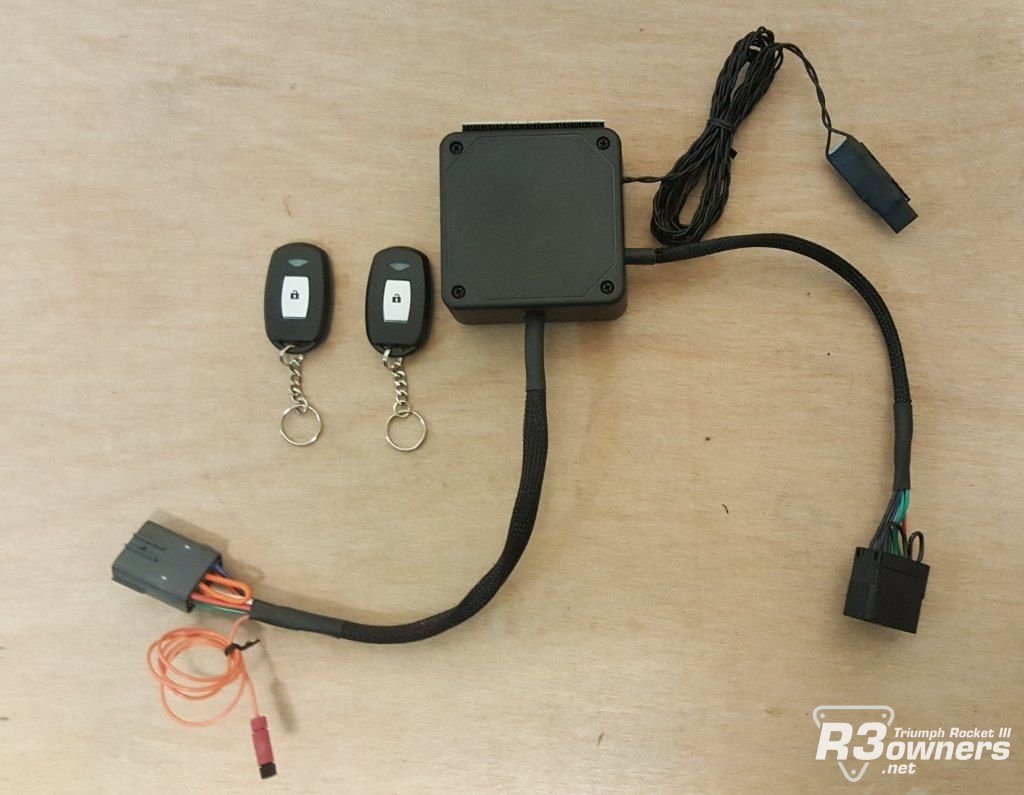 I'm well pleased at how it turned out in the end.
This kit can easily be installed in an hour - and the majority of that is just in accessing under the tank

If anyone would like further information, please PM me
(I will not publish prices here)

Please also see these threads for information/endorsements on previous versions:

The BEST MOD ever

I have just added a couple of new features, for even more added security.

The first one employs an enhanced power-up sequence - this will require the remote to be used to initiate the system with the remote, before it will function. This feature will be standard going forward on all new kits. (This only comes into play when box is first connected, or if it or the bike battery has been disconnected/re-connected - after the initiation it will commence to operate hands-free)
It adds an additional layer of security in that if anyone is messing with it, after it has been disconnected it can only become active again following the initiation procedure which requires the remote in-hand.

The second one adds an additional Immobilizer relay - this will only enable the ignition circuit when the remote is used to disarm the system. In the event of any potential type of hot-wire attempt the bike will remain immobilized, even if the key-less module were disconnected. This feature will be an optional extra - frankly those solid-state relay chips are quite expensive and it also required additional wiring to include it. (won't be prohibitive but will add so making it an option that many will choose not to worry about). The components and wiring will simply be omitted if this option is not selected.

As you will see from the initial pictures above, the top side of the board is already pretty densely populated. However I was able to include both features on the back side 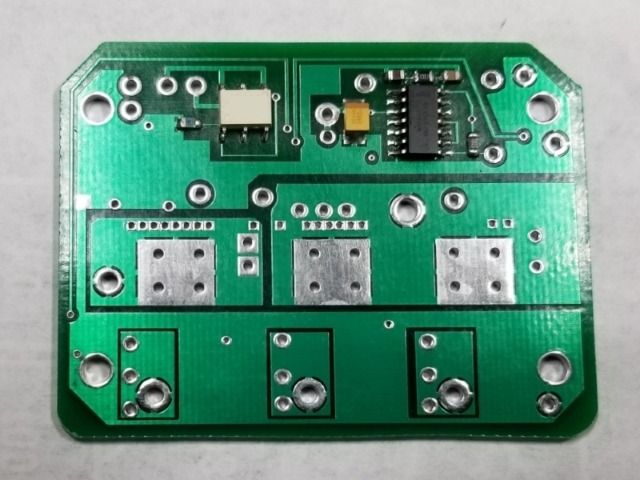 (the top side looks pretty much unchanged, just some minor movement of parts to accommodate the new interconnect through-holes) 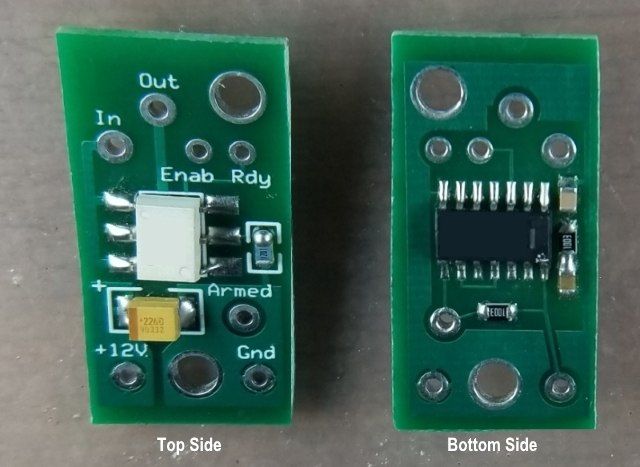 If you have an integrated system (like the one at the top of the thread) - or similar box then it can be retrofit.
It really needs to come back, but I can do a really quick turn-around. For those in the USA, this should be about a week door-to-door.
I've contemplated writing a procedure for those overseas to either DIY or use a local service to modify it - I would suggest that would not be something to be undertaken lightly . I'll consider this on a case-by-case basis.

For those of you with the earlier kits with the small box, it's just not going to be possible to accommodate this mini-board inside the already-crowded enclosure. However, I could potentially transfer everything to the new bigger box as part of an update process. Costs begin to add up in that regard however.

The hardware is available now - I'd like to get at least a few weeks beta test completed before I ship any with these new features.

As always, if you have any questions, let me know. Drop me a Conversation PM for pricing on either complete systems or potential upgrade.
Last edited: Jul 23, 2018

PDM60
No but that would be unchanged as far as driving the pdm60 goes ie the same as it was before - the difference now however would be that it would have all 6 PDM60 circuits available for accessories as it will not need to utilize three of them to switch the oem circuits as per that previous generation; before it HAD to be integrated as it was driving the oem circuits
Actually although the pdm60 could still be driven by the keyless controller as it was before there is really no need to 'integrate' and it can just connected as per the pdm60 retail config
IE Triggered off any ignition powered source
Last edited: Nov 24, 2016

I'm now completely keyless (key still attached to leather pouch to which the keyless fob is attached, it just does not need to leave pocket) with my keyless fuel cap arriving yesterday and fitted ten minutes later

HansO said:
I'm now completely keyless (key still attached to leather pouch to which the keyless fob is attached, it just does not need to leave pocket) with my keyless fuel cap arriving yesterday and fitted ten minutes later
Click to expand...

Mate,
I've had this for quite awhile and you will LOVE it!

DEcosse said:
PDM60
No but that would be unchanged as far as driving the pdm60 goes ie the same as it was before - the difference now however would be that it would have all 6 PDM60 circuits available for accessories as it will not need to utilize three of them to switch the oem circuits as per that previous generation; before it HAD to be integrated as it was driving the oem circuits
Actually although the pdm60 could still be driven by the keyless controller as it was before there is really no need to 'integrate' and it can just connected as per the pdm60 retail config
IE Triggered off any ignition powered source
Click to expand...

Pardon my typo - D not C!
So your new iteration leaves all 6 circuits open?
May have to made a spring run to your place . . .

HansO said:
you forget (@R3Tex) Morris's Bike I was riding had one fitted and I loved it
Click to expand...

I sure did forget that!
I be old, you know, with advancing CRS!

Nice! Never thought of looking for a touring as a beta user?