You are using an out of date browser and will experience issues on R3Owners.Net. Click Here to see options.
A

(For those that can't view the link.....Thank you azccj for sending the post. I nominate this for post of the year.)

Well I finally got a hold of a banged up tank that I could cut apart and use to recalibrate the low fuel light/ fuel gage. Take a look at the following pictures to see how the fuel sending unit works and how the fuel pump assembly sits inside the tank. 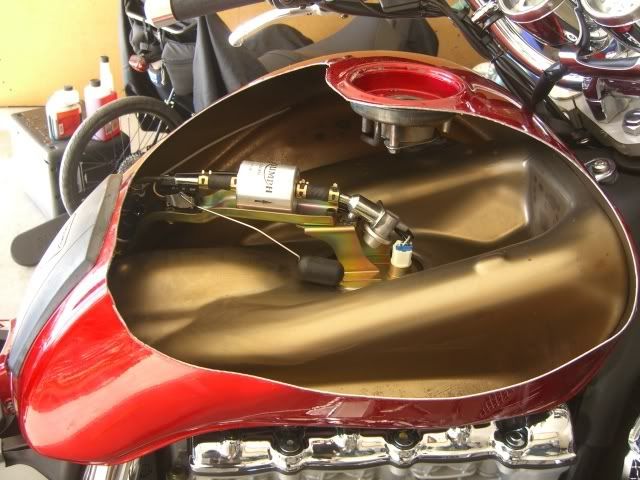 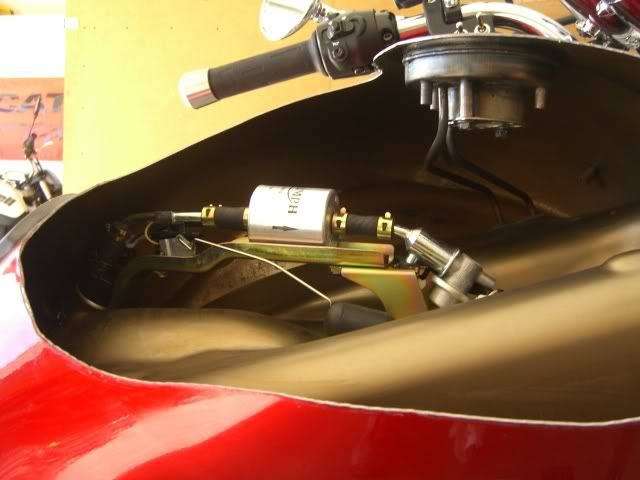 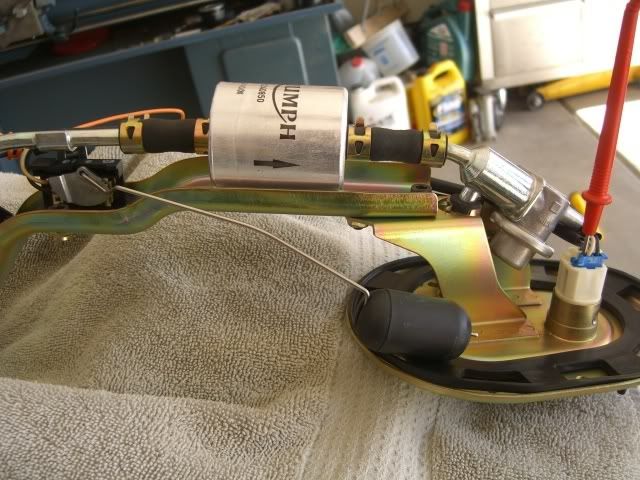 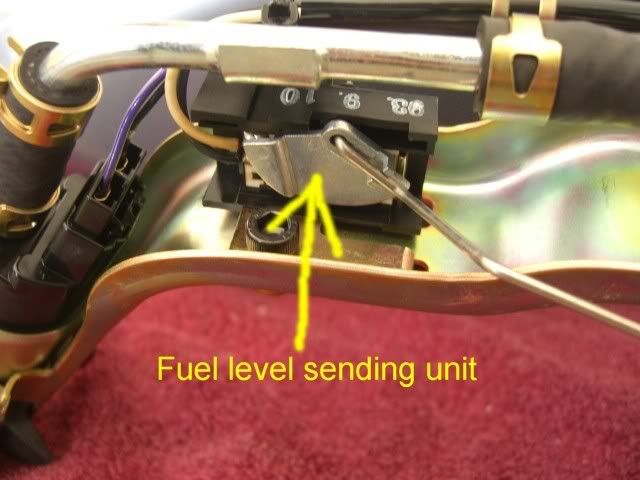 Now remove the electrical connector and unbolt the fuel hose from the bottom of the fuel pump assembly . The bolt for the hose is 18mm. 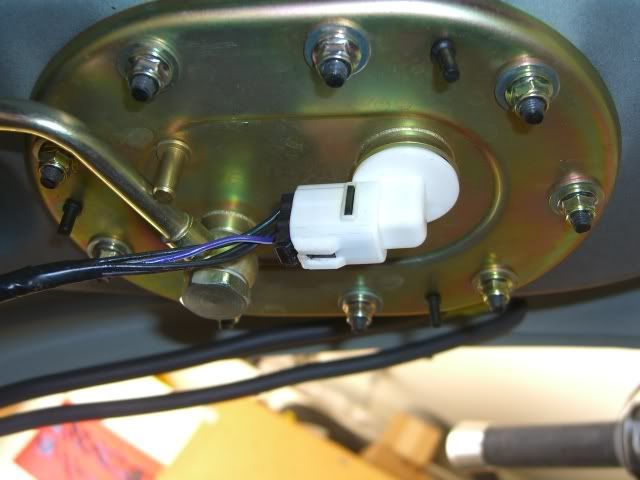 Mark then remove the two thin hoses that are on the bottom of the tank. One hose is the filler neck drain hose, the other goes to the charcoal canister. You don’t want to mix them up when you reinstall them. 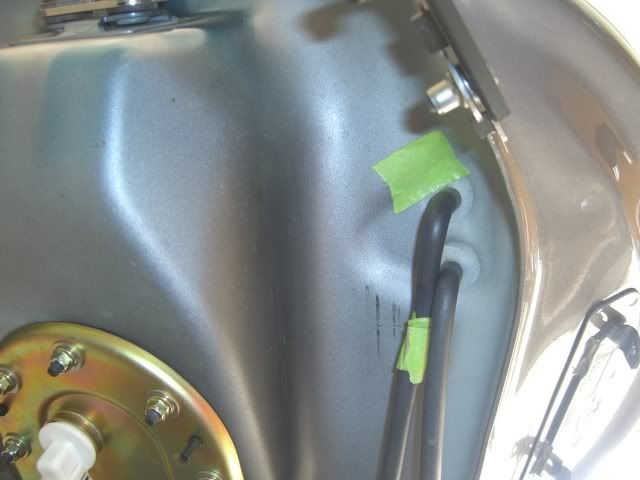 Remove the 8mm bolt that holds on the bracket that secures the two thin hoses to the tank. 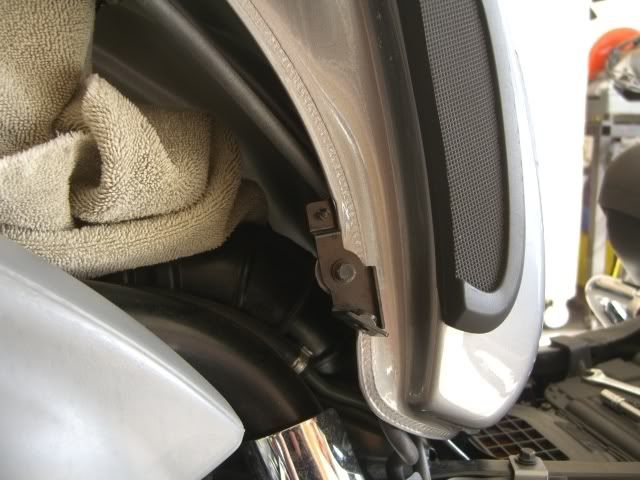 Now remove the long bolt that secures the rear of the tank to the frame. You can now pull the tank away from the bike and set it upside down on a soft towel. 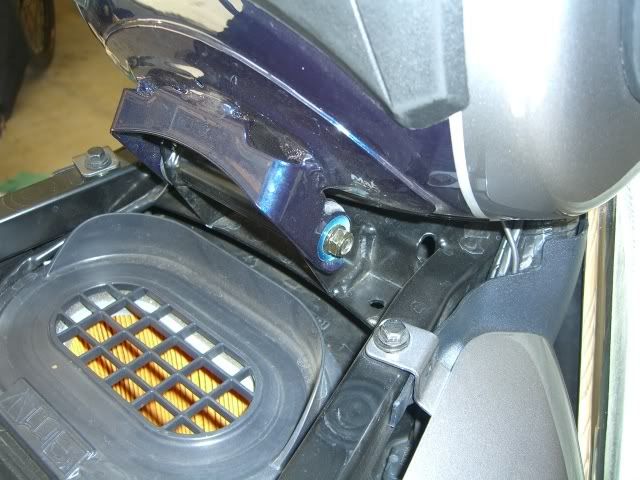 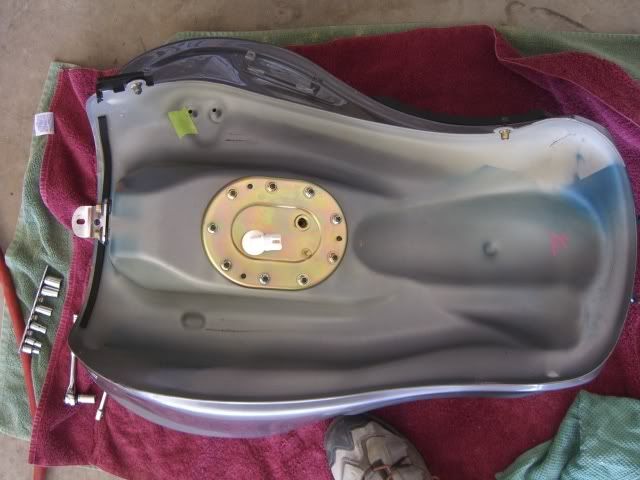 Remove the 9 nuts and 9 washers that secure the fuel pump to the tank. 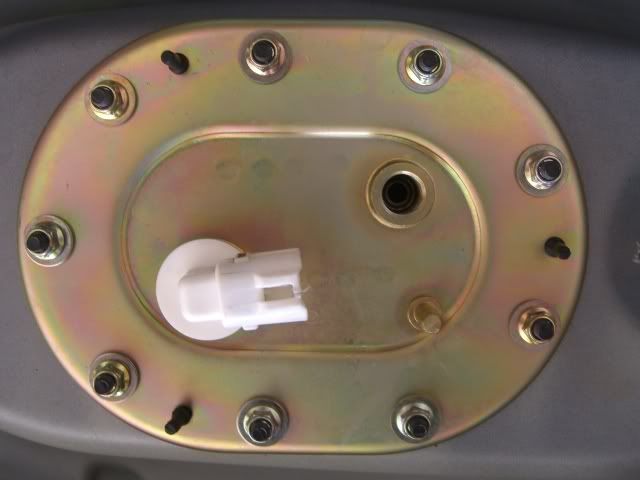 Warning! Warning! Warning!
Be very careful at this point. If you just yank the fuel pump assembly out of the tank you are going to be running back to the Triumph dealer to buy a new fuel level sending unit for $70.00 or so bucks. And if they don’t have one in stock, which is almost certain, you’ll be waiting a week for them to get it in. Take a look at the picture below. You can see the black fuel level float and the silver wire that attaches to it, which is going to get hung up on the lip of the tank as you pull the pump assembly out. Use a bent coat hanger wire to grab hold of the float and pull it up toward the pump assembly. You can then grab it with your finger and pull it through the hole. Once the float is out of the tank the whole assembly will easily pull right out. 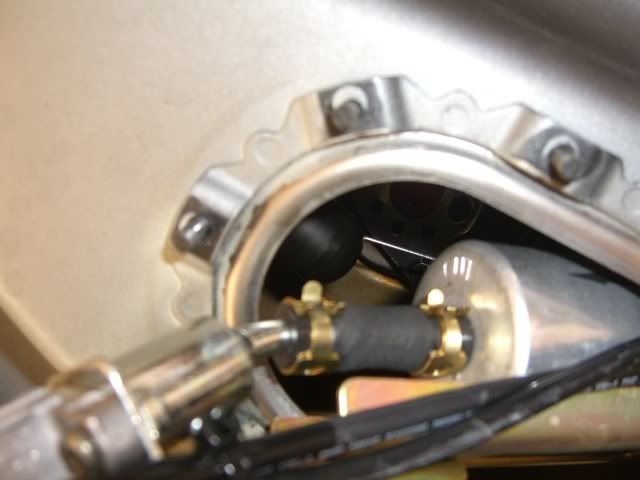 With the fuel pump assembly out at the tank you can see everything that is included in the assembly. 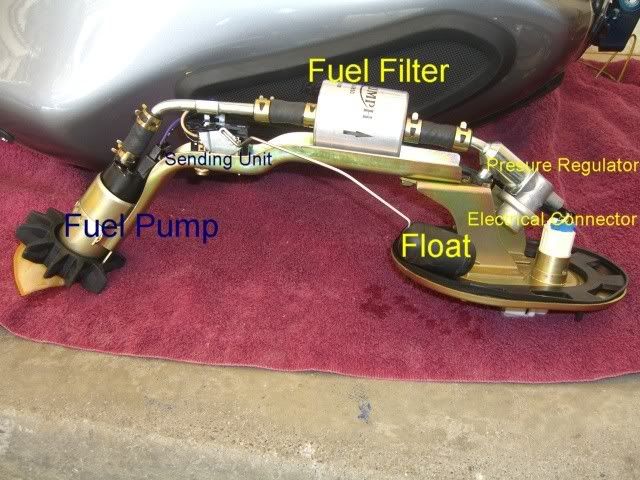 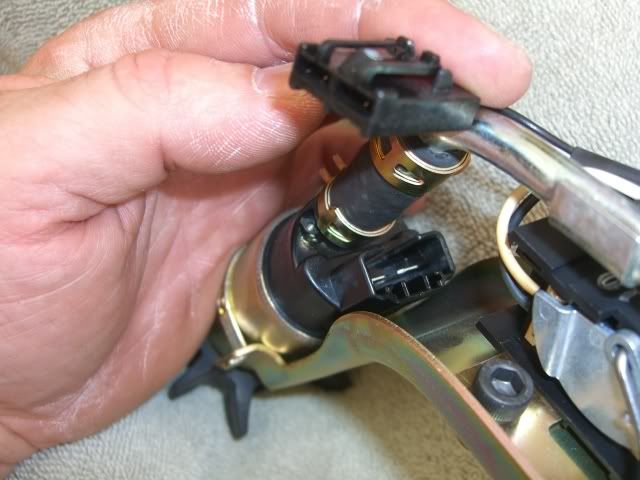 Take the negative lead of your digital voltmeter and attach it to a known good ground [NOTE: the frame on the Rockets are NOT intentionally grounded[ to ground it. Now attach the positive lead to the white wire of the four wire connector. See the pictures below. Go ahead and turn the bike’s ignition switch on. You should see that the voltmeter is reading 2.5- 2.8 or so volts. If you don’t, check that you have the voltmeter set properly and that the leads have a good contact to the frame and the white wire. If your voltmeter is reading a voltage, raise and lower the fuel level float. You’ll see that the higher the float is raised the lower the voltage output will be. If you have a fuel gage on your bike you’ll also see that the fuel gage will slowly move up and down as the fuel level float is raised and lowered. 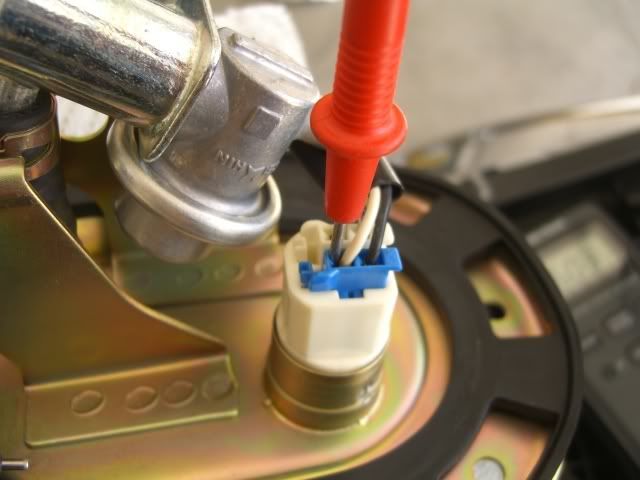 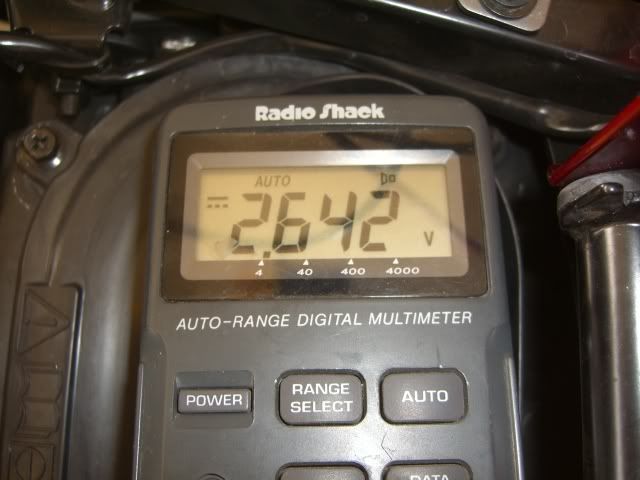 Once you know the accurate voltage that will cause the low fuel light to go on it is a simple matter of bending the wire that is attached to the float so that the voltage reading that will cause the low fuel light to come on, wont read that voltage until the float is resting about 3/16 of an inch above the black fuel pump assembly seal. The reason you want that 3/16 inch gap between the seal and the float is to compensate for the thickness of the tank which has a raised lip where the fuel pump assembly mates to the tank. If you fail to take this gap into account you might have a low fuel light that will never come on. Take a look at the below picture, as the unit comes from the factory the float arm, the silver wire that connects the float to the sending unit, is straight as can be. As you can see in the picture my recalibrated arm is just slightly bent. A little bit of bending goes a long way in adjusting the sending units voltage output. 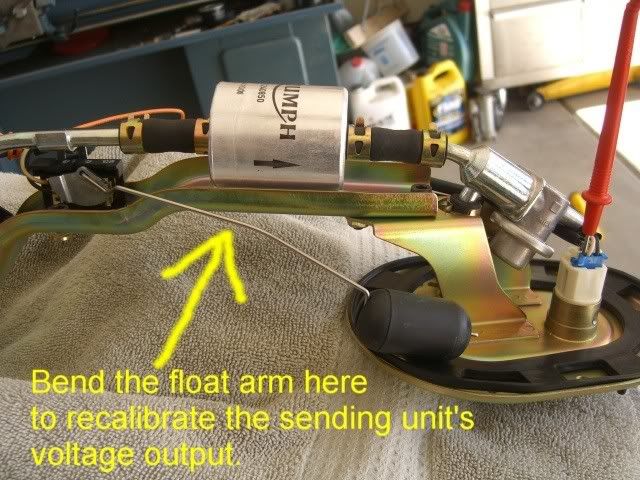 Once you have the assembly in the tank put the 9 washers on the 9 studs followed by the 9 nuts. Tighten down the 9 nuts using a torque wrench set at 5 NM using a crisscross pattern. Now remount the tank on the bike and install the fuel hose using the 2 new aluminum crush washers. Torque the banjo bolt to 15 NM using a 18mm socket. If you don’t have a 18mm socket a ¾ inch socket will do. Reconnect the 4 wire connector on the bottom of the fuel pump assembly. Reconect the two thin hoses to the bottom of the tank and bolt the hose bracket to the tank. Lower the fuel tank and bolt it down. Reinstall the 20 amp headlight fuse. If the tank was completely emptied add 1 gallon of gas so when you turn the ignition on the fuel pump isn’t running without fuel.

Now the moment of truth, turn the ignition on, hopefully the low fuel light is on. If it isn’t let the bike sit a minute or so with the ignition on. If it still isn’t coming on you got a problem. Your choice is to take it all apart again and start over or you might be able to stick something through the filler neck and bend the float slightly up.
Last edited by a moderator: Jun 21, 2020

Outstanding How to, just like having your own Triumph Tech. but better.

What's your next project going to be?

I second Pig9r's recommendation for post of the year though BigEarn2300 did a great job with explanations and pictures when he was rebuilding his engine.

I admire folks that can do stuff like that as my only expertise is being able to sit at the dealer for extended hours while they fix whatever is wrong! I'm also getting good at walking next door to the QT for drinks and snack and trying not to snore when I fall asleep in the parts department.

Very cool. Think I know the first thing I'm doing when I get home!

I'm also getting good at walking next door to the QT for drinks and snack and trying not to snore when I fall asleep in the parts department.
Click to expand...


Now that's funny right there, I don't care who you are! Good one PM.

I believe this post truely ranks right up there with Bigern's engine rebuild posting. Such detail & presentation should make this an Oscar nomination.

I gasped when I saw the first photo of the "disected" tank. I could not believe someone could murder their baby like that. But after reading on, I was relieved to know it was for the good of all captains, and it was a cast-off tank.

Thanks to you azccj. :bch:
B

Super post, one of the best I have seen. A lot of thought and effort went into

this.Congratulations and thanks.
Similar threads